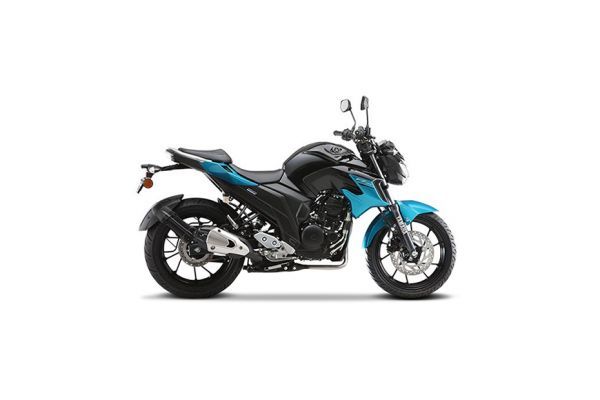 Yamaha FZ 25 is a commuter bike launched at a base price of Rs. 1.35 lakh in January 2017 by Yamaha in India. FZ 25 is powered by 249cc engine claiming mileage of 45.6kmpl. FZ 25 has a air cooled, sohc, 4 stroke, single-cylinder engine and a 5 speed gear box with automatic transmission. Yamaha FZ 25 comes with disc breaks in front and rear with a support of ABS. It is available in 4 variants and 9 colours.

Yamaha has unveiled the FZ 25 BS6 as well as an all-new FZS 25. The new motorcycles get a new headlamp with better lighting, engine cowl, a negative LCD display and a side stand cutoff switch. Its premium version gets knuckle guards and new colours. The new BS6 motorcycle delivers 20.8PS and 20.1Nm which is 0.1PS less and 0.1Nm more than the existing BS4 FZ 25. The BS6 FZ 25 is slated to launch in April while the BS6 FZS 25 will come later this year.

The BS4 FZ 25 recently received a price hike. The standard variant now costs Rs 1,34,680. However, there’s no change in the price of the MotoGP edition variant. It still retails at Rs 1,36,680 (ex-showroom Delhi). This is the first time Yamaha is offering a MotoGP-inspired livery in a motorcycle other than the R15. That said, the changes are restricted to cosmetic updates.

The existing 249cc single-cylinder air-cooled engine features an oil cooler and puts out 20.9PS and 20Nm. The motor comes mated to a 5-speed transmission. Suspension duties are handled by a telescopic fork and a monoshock. Anchoring the bike are disc brakes at both ends with dual-channel ABS. In terms of rivals, the FZ25 goes head to head with the Suzuki Gixxer 250.

The Yamaha FZ25’s engine and cycle parts are derived from the Fazer 250 sold in Brazil but get Yamaha’s Blue Core technology and is BS IV compliant. The 249cc oil-cooled and fuel-injected single-cylinder motor produces 20.9PS and 20Nm of torque. Yamaha claims a fuel efficiency figure of 43kmpl for the bike. The performance figures are slightly different from the Brazilian-spec model and also lower than the competition. The bike has been tuned for good drivability in Indian traffic conditions. Power is transmitted via a 5-speed gearbox from the Fazer 250. The bike weighs 148kgs which is quite good for the segment. Compared to the FZ-S the bike gets a sportier riding position with flatter bars, forward mounted seat and a rear-set footpeg. The 1360mm wheelbase is 30mm longer than the FZ-S. The 160mm ground clearance is similar to the FZ-S. The bike gets 41mm front forks and the rear monoshock from the smaller FZ with wider tyres mounted on new alloys. The bike gets a 282mm front disc and a 220mm rear disc. ABS has been given a miss to reduce costs. However, Yamaha says they are working on introducing ABS later.

Yamaha marked its presence in the burgeoning 250cc segment with the FZ 25, which is also the most powerful Yamaha to be manufactured in India. The Yamaha FZ25’s styling is inspired by the smaller FZ-S and the M-Slaz that is sold in Indonesia. Like all Yamaha nakeds, the FZ25 gets a chiselled fuel tank, sharp looking tank shrouds and a tiny LED headlamp. The tail lamp gets an LED unit as well. The exhaust too is inspired by the new FZ series and promises a meaty exhaust note. The bike gets an all-digital instrument console with an LCD display which is comprehensive and shows instant and average fuel economy with other information. The bike will come in three colours - Knight Black, Ballistic Blue and Warrior White.

TVS Apache RTR 200 4V: The TVS Apache RTR 200 4V is a comfortable city bike with plenty of grunt and agility for a quick race off the traffic lights and to tackle some twisties as well. But the engine feels too strained out on the highway. Also, ergonomically, with the high-set footpegs, it’s a tight spot for someone taller than 5 feet 10 inches. Even the brakes fail to inspire confidence under hard braking. Luckily though, TVS does offer ABS as an option.

Hero Xtreme 200R : In terms of competition, the Hero Xtreme 200R has a tough battle on its hands. Particularly owing to the features, power and styling on offer, which makes the competition a lot more value for money. During our first ride, it came across as a more commuter focused 200cc bike, which is easy going. So if that's the kind of machine you are looking for? Go for it!

Bajaj Pulsar NS200: In our comparison test with the TVS Apache RTR 200 4V, the NS200 came across as a well-balanced package that’s ideal for your daily city runs, occasional highway cruising and even for some fun on the twisties. The Bajaj Pulsar NS200 offers a lot more grunt, better-stopping power and well-balanced ergonomics in comparison to the TVS Apache RTR 200 4V. It also feels a lot more relaxed at high speeds.

The Yamaha FZ25 is a good option for someone looking for a daily commuter. It’s a lot more welcoming for tall riders as well, when compared to the TVS Apache RTR 200 4V. Being a Yamaha, the FZ25 will prove to be reliable in the long run, looks smart and is a lot more frugal in the city. But the engine feels stressed at high speeds. Moreover, both the brakes and tyres don’t inspire confidence under hard braking either.

Yamaha FZ25 : The Good and The Bad : PowerDrift