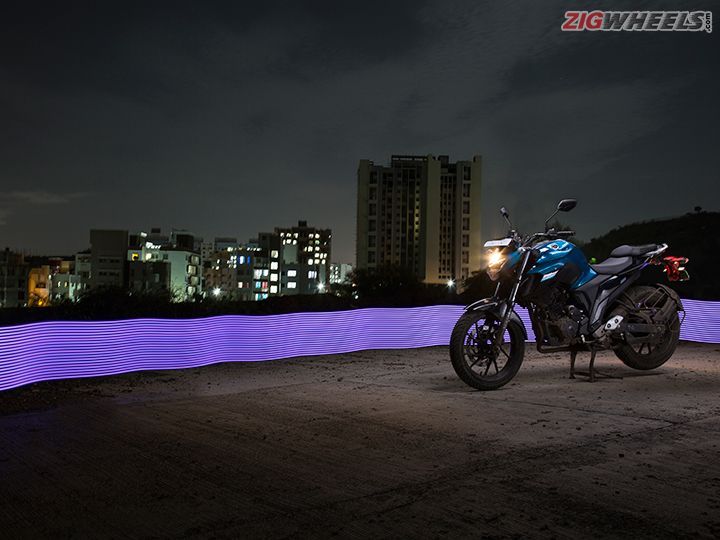 With the TVS Apache RTR 200 exiting the ZigWheels garage, I had to tag along with my colleague Amar in his car to work for a few weeks. I wasn’t complaining though, as commuting to work in monsoon on a two-wheeler isn’t the most practical of choices. However, I was missing riding in rains on weekends and, gladly for me, Yamaha called and informed that we can pick our Yamaha FZ25 long term bike. Understandably, I acted swiftly to make sure that it was my new long term. First aspect about the new FZ25 that impressed me is the way it looks. Yes, it isn’t a revolutionary design and more of an evolution of the Yamaha FZ-S Fi, but, for me personally, it’s a handsome looking motorcycle with its butch styling.

Powering the FZ25 is an air- and oil-cooled, 249cc, single-cylinder motor that delivers 20.9PS while torque is 20Nm, which are pretty modest figures for a 250cc bike. But numbers don’t always tell you tell the real story. Shorter gear ratios mean that the FZ25 has a good low and mid-range, which in turn translate to quick acceleration off the line (0-60kmph time of 3.77 seconds). Also, it feels very tractable while riding in city. Fuel injection means that throttle response is crisp and precise, however, the palm grips get slippery when your hands get sweaty. That said, we will always suggest you to ride a motorcycle with gloves and proper riding gear on. The 5-speed transmission has well distributed ratios for city riding, but the gearbox isn’t the most refined unit as downshifts are a bit crude and need effort.

The standout feature on the new FZ25 is the LED headlamp, which is a first for any production Yamaha bike in India. Sadly, it isn’t the best headlight we have come across as the light throw isn’t far or wide. Also the headlamp mount is a bit loose, which means the light flickers while going over broken roads in the night, hindering your vision. Talking about ride quality, the suspension has been set up spot on as it rides over rough roads rather well - a boon on the post-monsoon roads. Talking about mileage, the shorter gear ratios have played a vital role in making the Yamaha frugal as the FZ25 retuned around 42kmpl in the city which is impressive for a 250cc motor. However, I haven’t been able to push the FZ25 beyond city limits yet, but have a few long rides planned to test its highway prowess.