Has Yamaha’s quarter-litre naked been worth the wait? 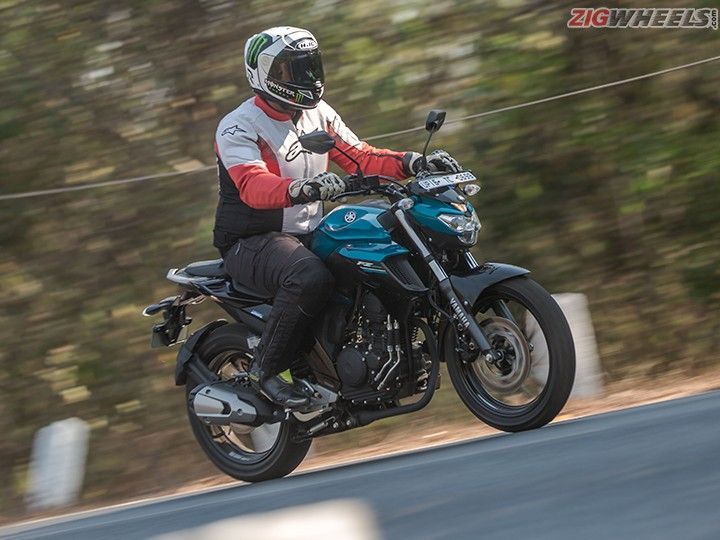 Eight long years after the FZ-16 was first launched, Yamaha has launched the FZ25 in the Indian market. The bike has garnered mixed responses, thanks in part to its rather simple-looking spec sheet. So, has the eight year-long wait for the FZ25, the quarter-litre naked with the tuning fork logo, been worth it? Or is this a case of too little, too late? We swung a leg over it in sunny Goa to figure out.

The FZ25 is Yamaha’s first 250cc naked in the country. Apart from being a player in the all-important 250cc segment the FZ25 ensures FZ-16 owners do not have to look elsewhere for an upgrade. In fact, as soon as I started riding the FZ25 it felt familiar in terms of the riding position, letting you sit upright while the footpegs are slightly rear-set. The design of the motorcycle, though different from the FZ-16, is in sync with the smaller FZs, which makes the FZ25 identifiable yet distinctly more upmarket.

How much more upmarket is it?

While it is upmarket in some ways, the FZ is surprisingly simple. The all-LED lights intend to dazzle the buyer with coolness. The  tail lamp is also an LED unit, although the turn indicators are not.Tyre sizes are the same as the smaller FZ, with the front end sporting a 100/80-section MRF Nylogrip tyre while the rear gets the fat 140/70-section MRF. Tyres are tubeless and the compound is softer than the smaller FZ’s, to offer better grip. While choosing the main ingredients Yamaha was clear that the FZ25 had to meet tight cost targets. Hence, more advanced radial tyres were nixed and ABS was also dropped. In fact the simple air-cooled engine, although equipped with fuel-injection, was partly chosen because of this outlook. Admittedly, the FZ25’s pricing is aggressive at Rs 1.19 lakh, ex-showroom New Delhi, and a big plus point.

Is it a looker?

Yes. The design makes it instantly identifiable as a bigger FZ, though the styling is completely new from end to end. Straight away it looks aggressive because of the tightly packaged LED headlamp. The shape seems to mimic a human face and uses two well-positioned LEDs for the low beam and one for the high beam. While we are yet to ride the motorcycle in the dark, total wattage for the headlight is 35 watts which should make for adequate illumination. However, first experiences suggest that it isn’t quite as bright as the unit on the Dominar 400.

The FZ25’s digital display is a plain-looking unit that even looks similar to the smaller FZ’s. We would have liked a more modern-looking display considering the 250cc segment is a premium one. The unit has the tachometer spread across its width, with a large readout for the speedometer. It also includes two tripmeters, displays the time and average, and current fuel efficiency. However, there is no gear indicator.

The tank can hold 14 litres of fuel and is a large, muscular unit with nice-looking and usable knee recesses and well-designed recesses for the handlebar when turning. The tank extensions look good too, and complement the rest of the design well. Seats for rider and pillion both are wide and offer good comfort, which hints at the fact that the FZ25 should be comfortable for touring too. The exhaust is stubby and muscular and is reminiscent of the FZ-16’s unit. The rear tyre gets a massive plastic hugger, which you should remove immediately. After all, Yamaha has added cool fins on the tail lamp hanger to reduce the spray hitting you in the wet.

How does it go?

The FZ25 is powered by an air-cooled, 249cc, single-cylinder mill that makes 20.9PS of power and 20Nm of torque. It uses fuel injection for precise fueling and an oil-cooler to keep things cool and efficient. Peak torque is produced at just 6000rpm, which is lower than most 200-300cc motorcycles. The engine uses a SOHC, 2-valve configuration, again, a setup well suited for creating a torquey engine. The acceleration is punchy and the FZ25 is quick to get off the line thanks to the strong bottom end grunt. The engine is mated to a five-speed transmission only, but ratios are adequate and there’s enough torque on most occasions for you to not feel the need to downshift. Fuel injection makes for a crisp throttle response and the FZ25 is quick to respond to inputs, which should help when slicing through traffic.

Power delivery is smooth and linear, and it was great to see that it tapers off only just slightly at higher rpms. On the few stretches of open roads the FZ25 showed that the performance was adequate too. The bike stretched its legs to an indicated 136kmph, well beyond the 110kmph mark where the smaller FZ runs out of breath. It feels relaxed even at 100kmph, and cruising at 110kmph is possible too, though the higher speed might cause fatigue to set in quicker over distances. On the whole, this is a likeable motorcycle, with its performance putting initial concerns of the FZ25 being a tad underpowered to rest.

Also, the gearbox on our test bike felt a bit notchy. However, that could be due to the fact that our test motorcycles were brand new, and running them in should help make the shifts feel smoother. That said, shifts were positive and gears slotted in well at all times. Its easygoing nature reminded me of the FZ-16’s power delivery and the FZ25’s performance feels friendly enough to not scare inexperienced riders. The bike is quick to build speeds thanks to its linear torque curve and the performance should make for rapid commutes. In fact Yamaha says that is the primary role of the FZ25 – being an effortless, fun-to-ride commuter, and its performance feels perfect for the role.

How does it handle?

The handling package had a familiar feel, and in more ways than one, the FZ25 felt like its younger sibling. The front end is light which helps in making the bike agile. The FZ25 should thus feel confident to make rapid progress through traffic, also courtesy its short 1360mm wheelbase. It felt nimble and surefooted around corners; that can be credited to the fat, 41mm forks upfront and well-sprung monoshock at the rear. The highlight figure here though is the kerb weight -  just 148kgs!

There’s a confident feel even when going fast around corners, also thanks to the grip from the tyres, though the FZ25 clearly is happier not being pushed to the limits of its handling abilities. That said, the FZ25 should be good fun for weekend rides, and experienced riders will appreciate the bike’s dynamic abilities as a fast, fun-to-ride quarter-litre naked. The ride quality is supple too, and soaks up bumps and undulations well and adds to its credentials as an able city slicker. Retardation from the 282mm front disc and 220mm rear disc is adequate, but the front brake could have done with a sharper bite as it is a little too progressive in terms of feel. On the whole, the FZ25 feels the way a Yamaha should feel in the handling department, with its light, confident feel and impressive handling.

Should I be considering the FZ25?

If you are looking for a 250cc naked motorcycle that’s not only good-looking and fun to ride, but is also well-built and reliable, the Yamaha FZ25 should certainly be on your list. Riding the motorcycle has allayed our initial fears of it being too little too late, something that its spec sheet originally suggested. Yamaha is clear about the role of the FZ25 as a punchy, fun commuter and the bike does its job well. It is a Yamaha, which means hassle-free ownership and reliability should be a given, though that’s something we will know only in the long run. The FZ25 is indeed a worthy upgrade from the FZ-16/S.

Its price of Rs 1.19 lakh, ex-showroom New Delhi, makes it a sweet package, although the fact that ABS isn’t offered even as an option is extremely disappointing. It’s simple to judge the nature of the FZ25 by the thought that a partly faired Fazer 250 would suit this platform just right.

All Comparisons of FZ 25