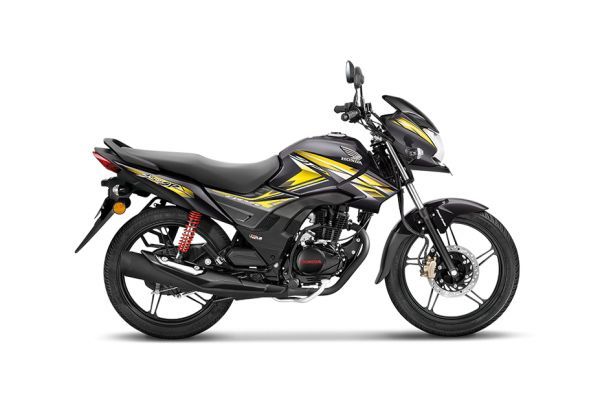 Honda CB Shine SP is a commuter bike launched at a base price of Rs. 63,857 in February 2019 by Honda in India. CB Shine SP is powered by 124cc engine claiming mileage of 65kmpl. CB Shine SP has a air cooled, 4 stroke, si engine and a 5 speed gear box. Honda CB Shine SP comes with front disc break and rear drum break. It is available in 4 variants and 5 colours.

Honda has launched the spiritual successor of the CB Shine SP, called SP 125. This motorcycle is BS6-compliant and is Honda’s second two-wheeler to comply with the upcoming emission norms. You can read all about the motorcycle here.

Coming back to the CB Shine SP, it is essentially a more premium variant of the CB Shine. The bike gets sportier, more premium-looking bodywork and more importantly, it gets a 5-speed transmission as opposed to the CB Shine’s 4-speed unit. The 124.73cc carburetted single-cylinder air-cooled engine produces 10.3PS at 7500rpm and 10.3Nm at 5500rpm.

Suspension bits include telescopic fork and twin shock absorbers at the rear. Honda has equipped the bike with a 130mm drum on both ends with CBS as standard. A 240mm front disc is also available as an option. The Honda CB 125 Shine SP goes up against the Bajaj Discover 125 and Hero Glamour FI.

The 124.7cc air-cooled and carburetted single makes 10.3PS at 7500rpm and 10.3Nm at 5500rpm. The engine gets Honda Eco Technology and, coupled with a more efficient 5-speed gearbox and low rolling resistance tyres, should give good fuel efficiency. The addition of a 5-speed gearbox also improves top speed. Honda claims a top speed of 93kmph.

A more premium alternative to the Honda Shine, this 125cc motorcycle gets a sharper, sportier bodywork. Other premium bits include a digital-analogue instrument cluster, split 5-spoke alloys and blacked out parts. Mechanically, the CB Shine SP gets a 5-speed gearbox and low-rolling-resistance tyres from MRF. For braking, the bike gets 130mm drums all around with Honda's Combi Brake System (CBS) as standard. The disc brake variant gets a 240mm front disc.

Hero Glamour Fi: The 2017 Hero Glamour Fi has been developed indigenously by Hero MotoCorp.The bike gets a completely revised styling with sleeker and sportier bodywork coupled to a sharper-looking headlamp. The bike gets a new semi-digital instrument console and an LED tail lamp. The all-new 125cc motor has what Hero calls Torque On Demand (TOD). The 125cc fuel-injected motor makes 11.5PS and 11Nm of torque. It also gets Hero's i3S (start-stop) technology. Hero claims a fuel efficiency figure of 62kmpl for the Glamour Fi.

Bajaj V12: The Bajaj V12's biggest calling card has to be its unique design. It looks more like a mini cruiser and boasts the widest tyres in the segment. It also looks different from your run of the mill commuters and looks quite good on the streets. The bike gets a 124.5cc air-cooled single-cylinder motor that makes 10.7PS and 10.9Nm of torque. The motor gets twin spark plugs for better combustion efficiency. It weighs more than the competition but its torquey motor makes it effortless to ride in the city. Bajaj claims a fuel efficiency figure of 57kmpl for the V12.