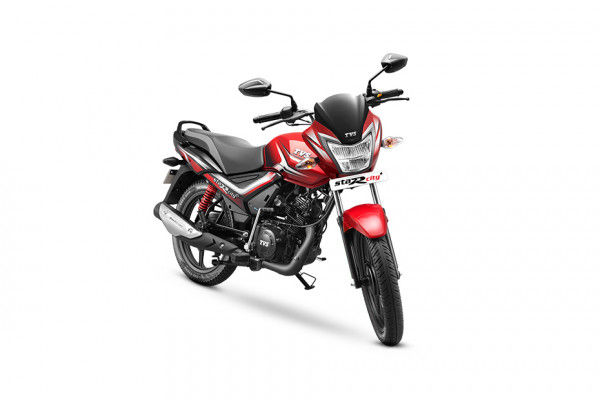 Ask your question from Star City Plus owners and experts
Your Question should contain at least 5 characters Submit Cancel
Available EMI Options
EMI @ Rs. 1,858 per month Apply for Loan

TVS Motors has launched the Star City Plus BS6 in India. It's available in two variants priced at Rs 62,034 and Rs 62,534 (ex-showroom, Delhi) respectively. That's a price bump of Rs 8,532 and Rs 7,500 over their respective BS4 counterparts. The updated model comes packed with features and gets a fuel-injected motor.

On the feature front, the BS6 model comes with full LED headlight (segment-first) and a USB mobile charging port. The bike also features a dual-tone seat and a redesigned front fascia.

It retains the exact same mechanicals as before -- a conventional telescopic fork and twin rear shocks. Anchoring the bike are drum brakes (130mm front and 110mm rear) at both ends paired with SBT (Synchronized Braking Technology). The TVS Star City Plus BS6 competes against the Hero Splendor iSmart 110 BS6, the soon to be updated Bajaj Discover 110 CBS and Honda Dream Yuga.

The BS4 Star City Plus is available in five single-tone colours, four dual-tone shades, and two special liveries to choose from, including a ‘Kargil’ edition to pay tribute to the Indian Armed Forces.

Powering the motorcycle is a 110cc displacement motor that produces 8.4PS at 7,000rpm and 8.7Nm at 5,000rpm, paired with a 4-speed constant mesh gearbox. The bike comes with a single cradle frame and gets telescopic forks up front and twin rear shock absorbers. The suspension setup is soft and soaks up undulated surfaces with quite an ease. Braking hardware consists of a 130mm front and 110mm rear drum with Sync Braking Technology.

Design-wise, the Star City+ gets the same styling as most of the commuter motorcycles out there. But the snazzy new graphics, chrome on the exhaust, and the 3D logo makes the Star City+ one of the most striking commuter motorcycles. In terms of features, it gets an analogue dial for speedometer and a digital fuel gauge along with a service indicator, eco and power mode indicator. Although the Star City+ is a commuter, its build quality is quite impressive. For example, the switchgear quality of the motorcycle is fantastic and even the paint finish is impressive for the price point.

In terms of rivals, the TVS Star City+ goes up against the Hero iSmart 110, Bajaj Discover 110 and the Honda Dream Yuga.

Must Read Questions & Answers Before Buying Star City Plus

All Star City Plus Reviews

All Star City Plus Images

All Star City Plus News

What is the price of TVS Star City Plus?

What is the Tyre and Wheel type of TVS Star City Plus?

TVS Star City Plus has Tubeless tyre and Alloy wheels.

Does the TVS Star City Plus have ABS?

Which is better TVS Star City Plus or TVS Radeon?

What is the EMI of TVS Star City Plus in Delhi?

What are the colours available in TVS Star City Plus?

Star City Plus Price in India