8,000 kilometres later, the TVS Star City remains as sprightly a commuter as ever, albeit a little frayed at the edges. "You don’t commute on a bike in Mumbai, you just don’t.” That’s what friends who’ve lived in the city advised me when I told them that I was shifting to The City that Never Sleeps to join ZigWheels. And they were right; the famous suburban trains are Mumbai’s lifeline, and, despite them overflowing to the gills, is still the most efficient way to get around here.

But I still needed another frugal and personal runabout to get around this metropolis, and so, the keys to the TVS Star City+ were handed to me. With 7300 kilometres already on the odo, she was just entering her adult phase, the newness of the every nut and bolt now replaced by the sheen of the well-worn. Everything has settled into place and, while there are nothing rattling and squeaking yet, it all feels like a well-used vehicle.

The Star City+ has clocked 800-odd kilometres in her last three weeks with me, and she has consistently delivered around 57 km/l in this time. Having had no time to take her out of the confines of the city, what with new job responsibilities and all, she was ridden entirely in the choc-a-bloc Mumbai traffic, which makes the efficiency figure not a bad bargain at all.

The only gripe I have about the Star City+ this time round isn’t even a gripe on the bike itself. Her factory-fitted tyres are nearing the end of their lifespan, helped for nothing by Amar, our resident video whiz and her previous rider, who rode her as enthusiastically as he swings his Magic Mouse around in Final Cut Pro. A new set of tyres should be the ideal welcoming gift for this, my new pair of wheels, then. I think I will ask Amar to pony up the money for at least the rear tyre then. 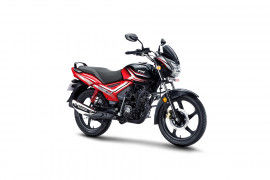