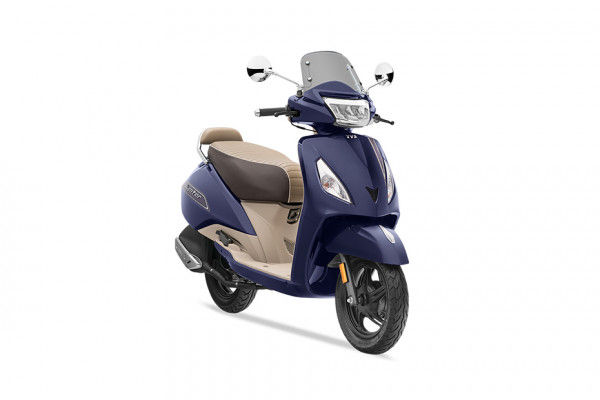 TVS Jupiter is a scooter available at a price range of Rs. 63,852 to 79,892 in India. It is available in 4 variants and 16 colours. The Jupiter is a powered by 109cc BS6 engine. This engine of Jupiter develops a power of 7.47 ps and a torque of 8.4 nm . The TVS Jupiter gets disc brakes in the front and drum brakes at the rear. The TVS Jupiter weighs 109 kg and has a fuel tank capacity of 6 liters.

TVS has finally launched a disc brake version of the Jupiter. The disc brake is only available on the ZX variant, and the new ZX Disc variant now also comes with an ACG starter, called i-TOUCHstart in TVS lingo. Full details for the new variant are available here. TVS recently hiked prices for all 3 variants of the Jupiter, but thankfully the hike is quite marginal. The Jupiter BS6 was the first scooter from TVS’ lineup to receive BS6 updates and that doesn’t come as a surprise since it’s the most popular TVS scooter.. It now gets a fuel-injected motor, a new blue paint option, a mobile cubby hole, USB charger, and a tinted visor. The Jupiter BS6 is priced from Rs 62,062 to Rs 68,562 (ex-showroom Delhi).

Powering the scooter is a BS6 compliant 109.7cc air-cooled and fuel-injected motor. It delivers 7.47PS at 7000rpm and 8.4Nm at 5500rpm. That’s 0.52Nm less than the BS4 Jupiter. However, peak power now comes 500rpm lower in the rev range. While there is a slight drop in power, TVS claims the new scooter delivers 15 per cent better fuel economy. The Jupiter BS6 continues to use a CVT. The Jupiter BS6 continues to use an underbone frame with a telescopic fork and a three-step preload-adjustable monoshock. It gets 12-inch alloy wheels with tubeless tyres. The Jupiter BS6 gets drum brakes on both wheels, which is surprising considering the BS4 Jupiter came with an optional front disc brake. At 109kg, the Jupiter BS6 is one of the heavier 110cc scooters out there. However, ground clearance, at 150mm, is quite good for a scooter. It gets a 21-litre storage bin under the seat that can accommodate a regular full-sized helmet.

The TVS Jupiter BS6 is available in three variants -- Base (Rs 62,062), ZX (Rs 64,062) and Classic (68,562). While the ZX variant gets beige plastic panels and a two-tone seat, the Classic variant gets a tinted visor, chrome mirrors, a sticker job, padded seat, and a backrest.

TVS could launch the Grande BS6 variant with a front disc brake in the near future.

The BS6 Jupiter shares its design with its BS4 predecessor. However, it does get an LED headlight which was first seen on the BS4 Jupiter Grande variant. Other new updates include redesigned graphics and a new Indiblue paint job (Classic BS6 variant). Buyers have a huge array of colour options to pick from as the Jupiter BS6 gets 13 colours across three variants. The base Jupiter BS6 variant comes in Mystic Gold, Titanium Grey, Midnight Black, Volcano Red, Pristine White, Walnut Brown, Matte Blue, and Matte Silver. The more premium ZX variant comes in Starlight Blue and Royal Wine. The top-spec Jupiter Classic BS6 variant is available in Indiblue, Autumn Brown and Sunlit Ivory.

The Jupiter BS6 gets an LED headlamp, an LED tail lamp, while the indicators are bulb-type units. It features an analogue instrument console as standard that offers info such as speed, fuel level, and houses other telltale lamps as well. However, some variants do feature a semi-digital instrument cluster. The external fuel filler cap, external pass light switch, and alloy wheels have been carried over. While the Jupiter BS6 variant gets a standard USB charging outlet on the front apron, TVS also offers an underseat USB port as an option. 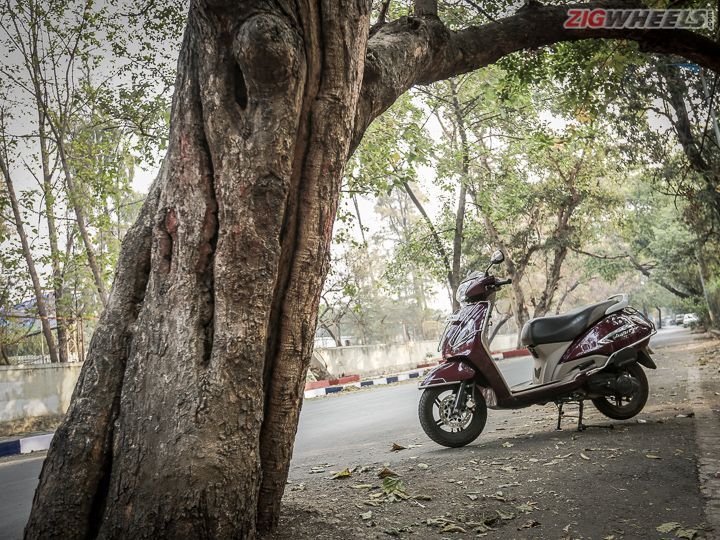 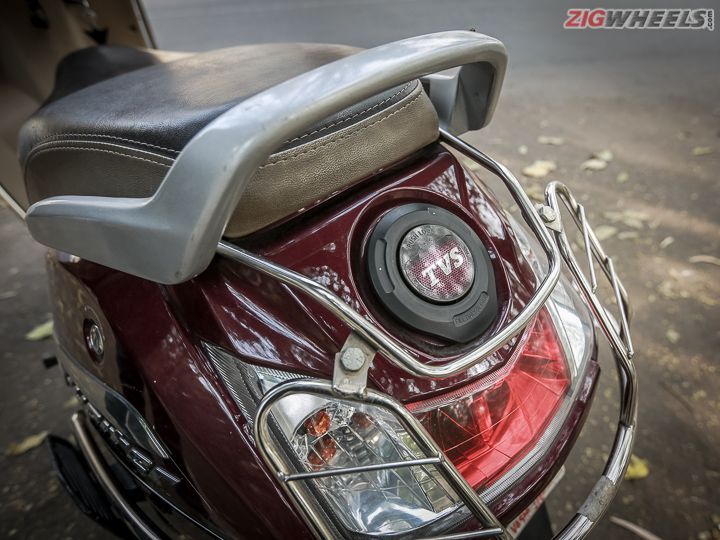 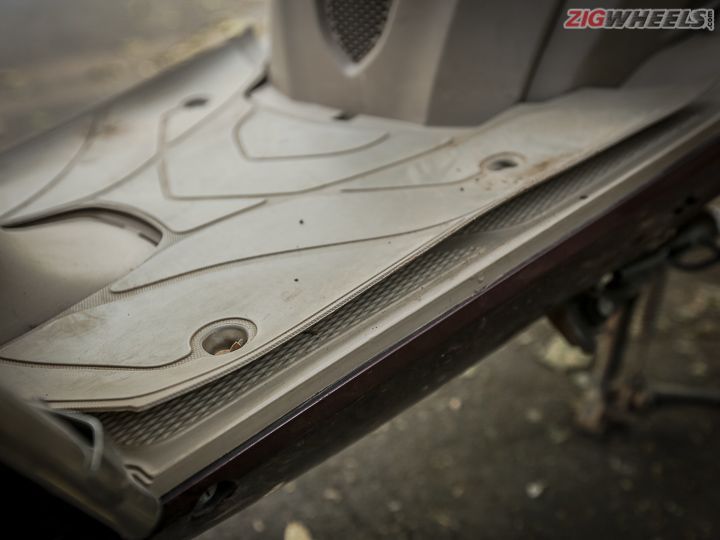 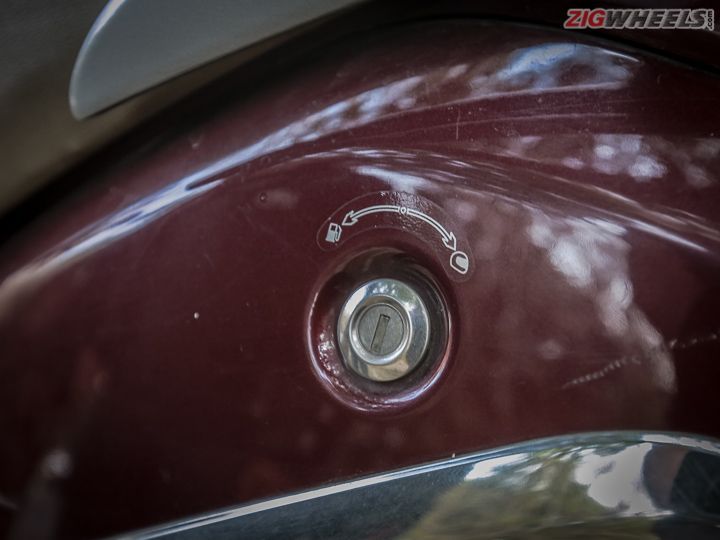 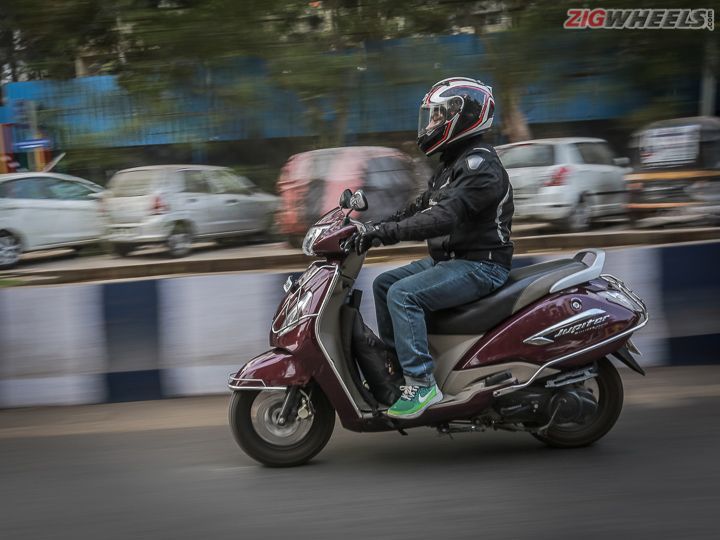 Yes, I’ve taken it out on the highway too. While keeping up with the flow of 21st century traffic is quite a task, the Jupiter can and will do the odd long-distance run -- provided you’re willing to live with the overly soft seat. It isn’t much of a bother -- it is actually a boon really -- on short rides in the city, but longer stints on the saddle will certainly necessitate breaks, not just for fuel but to rest your bum. 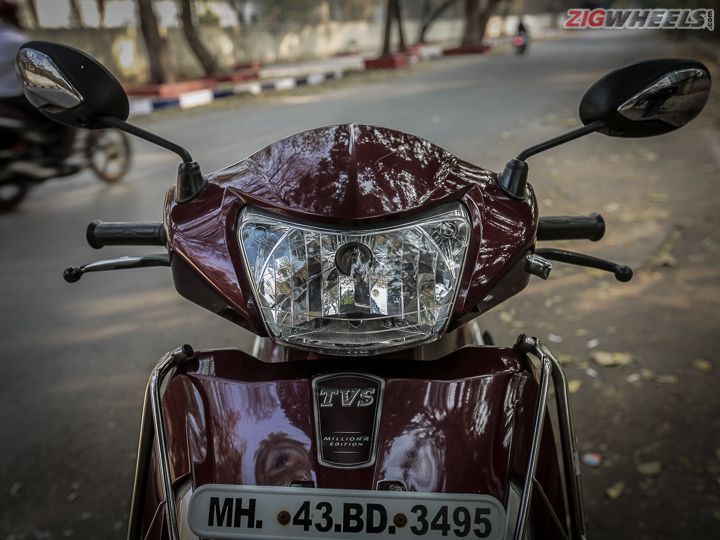 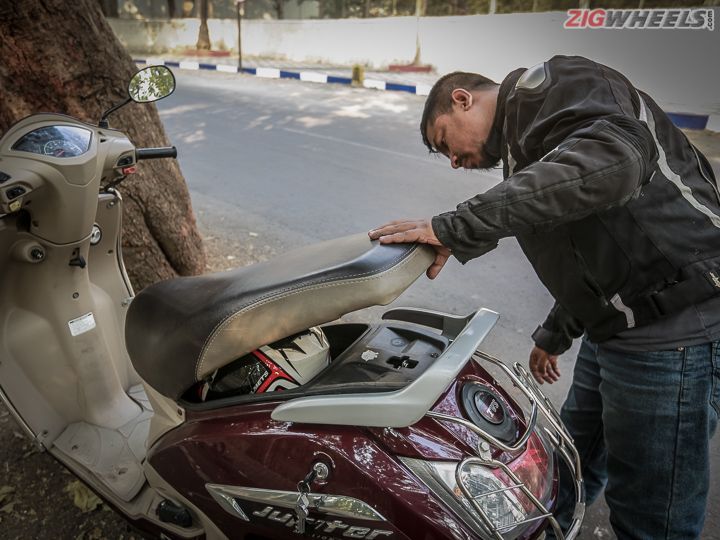 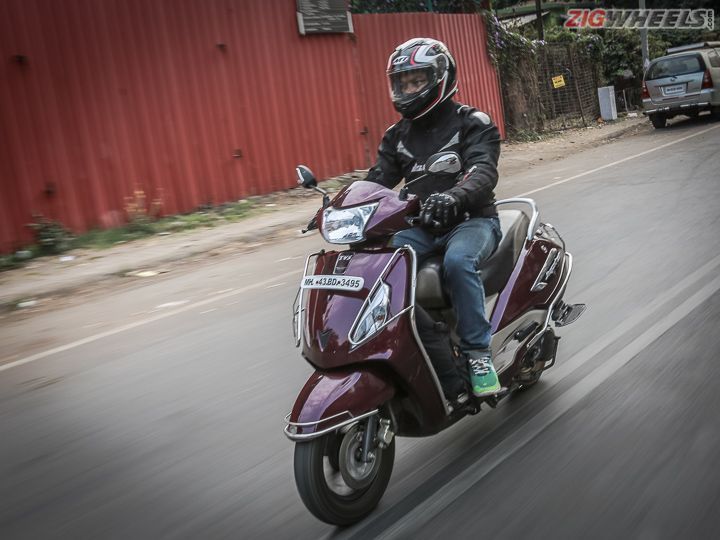 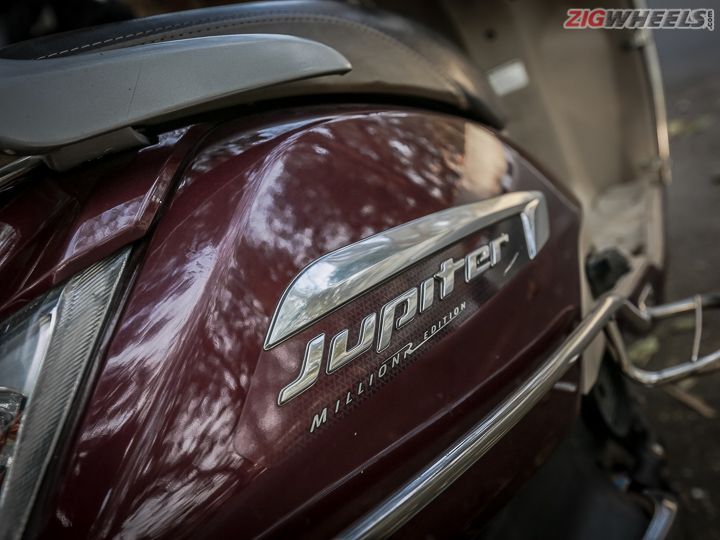 What is the price of TVS Jupiter?

The ex-showroom price of TVS Jupiter is 79,892. Check On Road Price of Jupiter. .

What is the Tyre and Wheel type of TVS Jupiter?

Does the TVS Jupiter have ABS?

No, ABS feature is not available in TVS Jupiter. View full specification of Jupiter.

Which is better TVS Jupiter or Honda Activa 6G?

What is the EMI of TVS Jupiter in Delhi?

What are the colours available in TVS Jupiter?