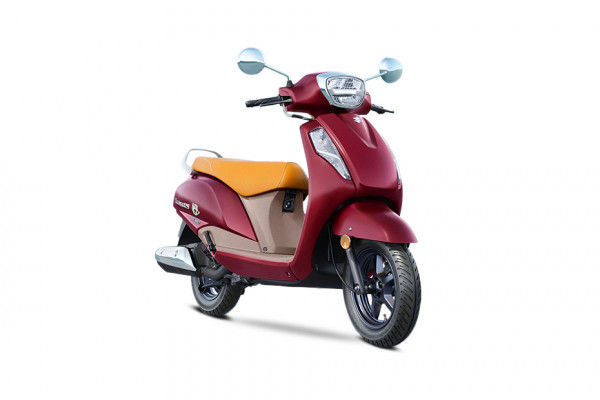 The price of the Suzuki Access 125 has been hiked for the second time since its launch, now starting at Rs 68,800 and going up to Rs 73,400/ The Access is a popular family scooter catering to the 125cc segment. It is by far the best-selling 125cc scooter for years and Suzuki launched BS6-compliant Access 125 in January 2020 and showcased it at the 2020 Auto Expo as well. In March, the Japanese brand hiked its prices of all the BS6 variants for the first time.

The Suzuki Access 125 BS6 comes with a 124cc single-cylinder air-cooled fuel-injected engine which churns out 8.7PS at 6750rpm and 10Nm at 5500rpm. Comparatively, the BS4-compliant Suzuki Access 125 generates the same amount of power but at 250rpm later and 0.2Nm more torque at 500rpm earlier. The engine is paired with a CVT unit. The Suzuki Access 125 BS6 comes with a telescopic front fork and a single shock absorber at the rear. Brakes include a drum brake or a disc up front and a drum unit at the rear, with CBS as standard across all the variants. The 12-inch front and 10-inch rear wheel come either in alloy and steel, depending on the variant. The wheels are wrapped with 90/90 - 12 and 90/100 - 10 front and rear tubeless tyres respectively.

The Suzuki Access 125 BS6 has a very conservative and gender-neutral design language. The Suzuki Access BS6 comes with a new LED headlamp. The rear gets a large single-piece grab rail and the external fuel filler cap is located right below it. The chromed-out exhaust heat shield adds to the premium quotient as well.

The Suzuki Access 125 BS6 comes with an analogue speedometer with a digital inset to display the odometer readings and fuel level. There’s also an Eco Assist Illumination around the speedometer lettering which lights up as per the user’s riding style. This feature gives a fair idea about how one rides efficiently. Another notable feature is the LED headlamp, which is standard across all the variants in the BS6-compliant version. The scooter also comes with the Suzuki Easy Start System which ensures the engine cranks up at a touch of the starter button. For added practicality, there’s an apron-mounted cubby hole that can hold a half-litre water bottle, and an optional USB charger right next to it. The under-seat storage stands at 21.8 litres and for better convenience, it now comes with an external fuel filler instead of a conventional underseat fuel filler cap. As far as safety is concerned, it gets a combined braking system as standard. The scooter is available in both alloy wheels and steel wheels.

Q. Hi is there any issue with Suzuki Access125 BS6 variant headlight focus that focus is slightly not straight in alignment?
Q. Which is the better option to buy Honda Dio and Suzuki Access 125 ?
Q. What is the maximum speed to use for a 125 Bs6 ride up to 1000 km?
Q. Does Suzuki Access 125 Bs6 model have chance water leaking through fuel cap ?
Q. Why is front wheel of Access bigger than rear wheel?
Q. Possible For 100 Speed Bs6 Access
View More Questions
Q. I had a confusion between Ntorq and Activa 125 BS6, which should I buy. I am getting a relevant answer on Internet which is best? View All Answers
Q. I have heard that the fuel caps and seats on the Activa bs6 scooter did not open properly after a few months of use. Is this right or wrong ? I decide to buy a scooter within a budget of 1 lakh. Please suggest me which scooter is the best Activa or Access or Jupiter or Dio or Facino? I hope for your suggestion sir.
Q. Which scooter is best TVS Ntorq 125 or Suzuki Access 125?
Q. Activa 125cc BS6 or Access BS6 125cc, which is better? View All Answers
Q. Which is the best scooter between Honda Activa 125 Deluxe and Suzuki Access 125 Deluxe? View All Answers
Q. Help me to buy between the BS6 Suzuki Access and BS6 Honda Activa 6G in terms of better mileage and maintenance costs. View All Answers
View More Questions
All Access 125 Questions and Answers

While Honda is renowned for its scooter sales and is the undisputed king of the Indian scooter segment, another Japanese two-wheeler manufacturer has followed its footsteps. Suzuki Motorcycle India’s highest selling product is the Access 125 scooter. What made the Suzuki Access 125 click among the masses is the fact that it had a higher displacement 125cc motor as opposed to the 110cc unit on its rivals. Other positives were refinement, reliability and ease of maintenance being a product from the land of the rising sun.

The Suzuki Access maintained its position as among the highest selling 125cc scooter in India but has faced stiff competition since the Honda Activa 125 made its debut which is also our pick as the best 125cc scooter on sale in India. The Suzuki Access was showing its age cosmetically and mechanically while new products also sported better features. Taking note of this situation, the Japanese two-wheeler giant recently launched the new Suzuki Access 125. 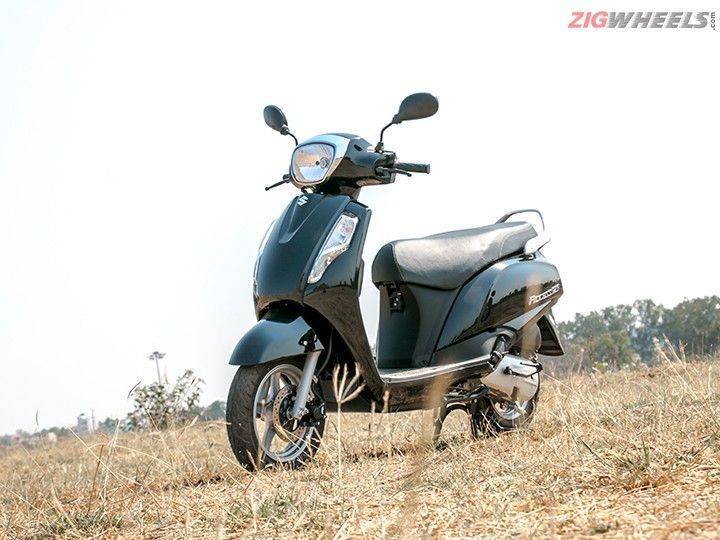 The bland styling was among the biggest drawbacks of the Access 125 and it wasn’t the most appealing scooters on sale. Gladly, Suzuki designers have taken stock of the situation and given the new Access 125 a fresh lease of life with respect to its appearance. The new Suzuki Access 125 gets more angular lines while the handlebar mounted large headlamp with chrome housing and apron mounted turn indicators give the new scooter a dominating face. In profile, the new Access 125 looks like any other run of the mill scooter but the exhaust muffler looks out of place. 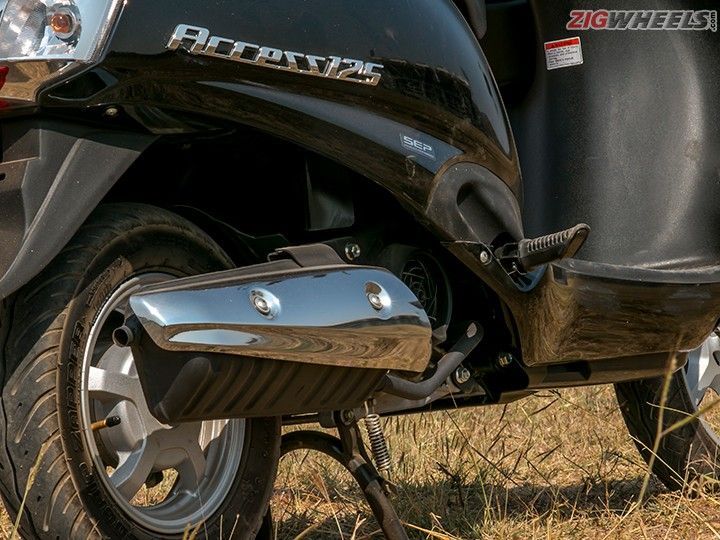 Given the fact that the rear panel is swept back, the horizontal exhaust looks weird but the chrome heat shield will be appreciated by most Indian buyers. The large tail lamp unit with a panel of chrome above it looks unique and so do the optional alloy wheels. The Suzuki Access 125 isn’t a scooter that will garner the eyeballs similar to a Vespa but the overall styling is more appealing than its predecessor. 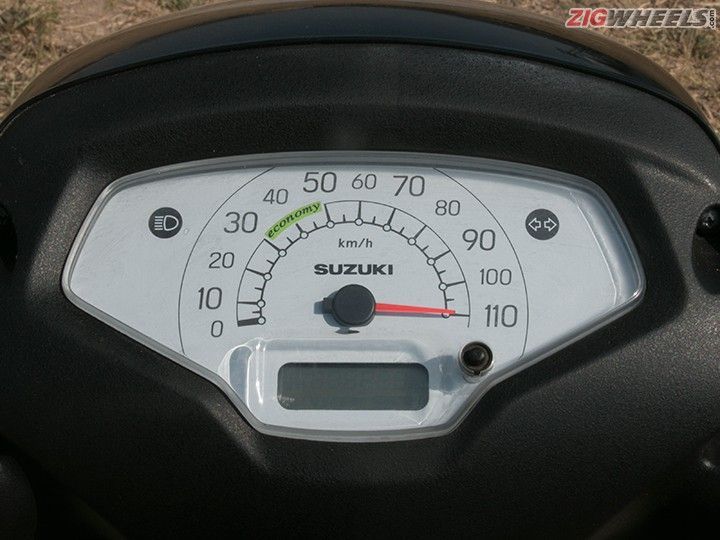 The new Suzuki Access 125 gets a semi-digital unit with a digital display for fuel gauge, odometer, service indicator and two trip meters. The seat can be unlocked conveniently through the ignition keyhole which is a good addition. Also the shutter key has a one push central lock system. There’s also a cubby hole next to the choke knob which is deep enough to hold a 1-litre water bottle. Mobile charger is an optional extra and is located next to the cubby hole unlike the under seat option as in rival scooters. 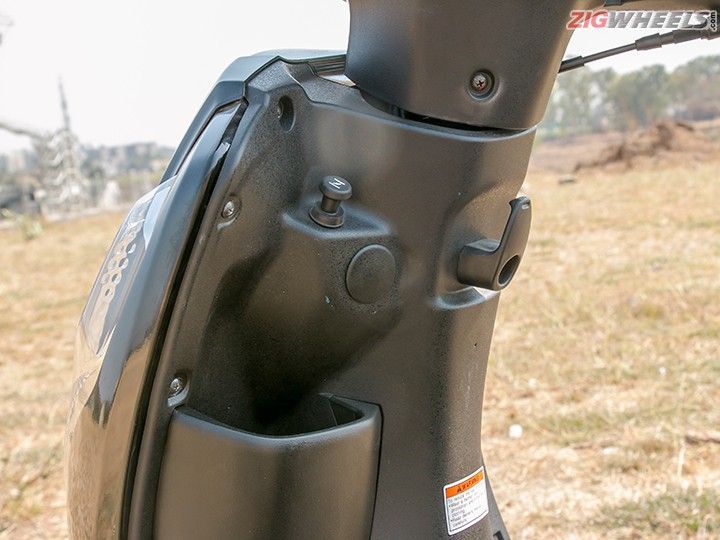 This means that one can place the phone in the cubby hole for charging and see notifications at red lights but we must warn that the phone can “pop out” while going over potholes or large speed breakers. The lack of an external fuel filler cap on the new scooter is a letdown as many 110cc scooters offer the same. Under seat storage is generous and among the best in segment. To make the scooter lighter, metal has been ditched for fibre body panels at the rear while the front apron and mudguard is metal. Switch gear quality is average while overall fit and finish along with build quality is good. 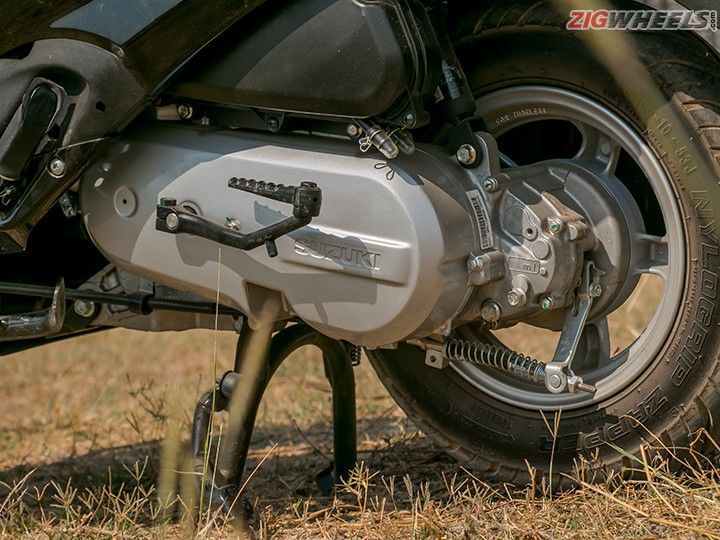 Powering the new Access 125 is an air-cooled motor developing 8.7PS of power and 10.2Nm of torque. While in terms of number, there isn’t much of a difference between the new scooter and its predecessor but Suzuki engineers have focussed their attention to make the scooter more refined and efficient. Acceleration of the scooter is brisk and the new Access 125 darts off the line rather eagerly. Mid-range acceleration is good which is a crucial factor for overtaking and has a strong pull from 40kmph to 70kmph. 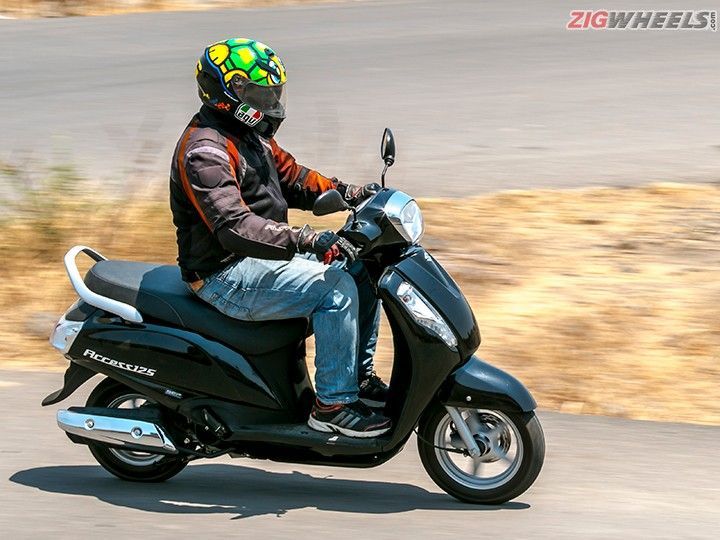 Apart from the performance, a factor that really impressed me was the refinement of the scooter. The Suzuki Access 125’s powerplant is among the smoothest in the segment. Despite riding the scooter at speeds close to 90kmph there wasn’t any vibes from the handlebar or footboard which speaks of its excellent engineering. Suzuki has applied the SEP (Suzuki Eco Performance) tech on the new scooter. SEP basically reduces friction between the mating parts of the engine thereby increasing thermal and fuel efficiency. The Japanese two-wheeler giant claims a mileage figure of 63kmpl which. On our test run, the new Suzuki Access 125 retuned us an overall mileage of 50-53kmpl which is among the highest for a 125cc scooter. 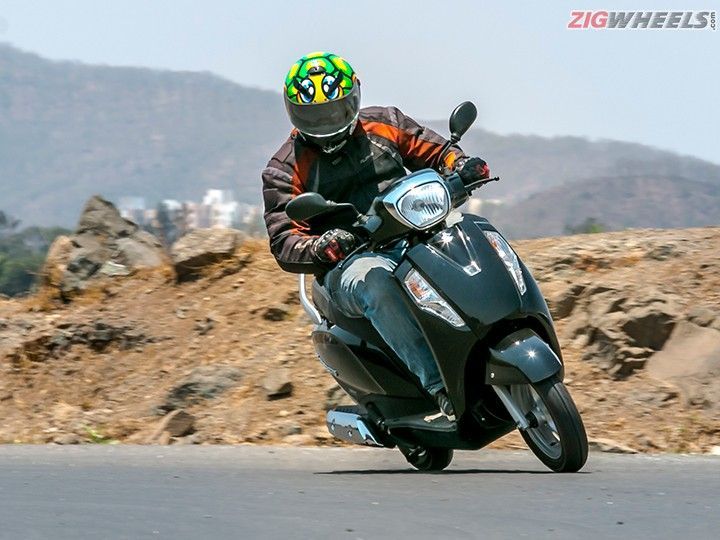 In terms of riding ergonomics, the new Suzuki Access 125 is similar to any other scooter. But what sets it apart is the fact that it has a taller handlebar that makes riding posture a bit more comfortable for tall riders. Also this means that the handlebar doesn’t get locked with the rider’s thigh while negotiating U-turn which is the case with most other scooters. The long seat means that the pillion rider also isn’t cramped for space. Suzuki engineers have also reworked the telescopic front forks and the result is clearly apparent. 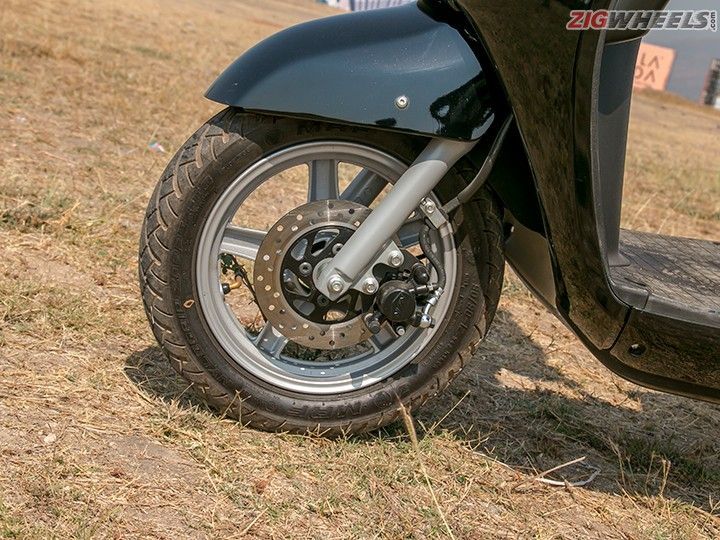 The new Suzuki Access 125 has excellent ride quality as it ironed out bumps and undulations with an authority of a third world dictator. This excellent damping endows the new scooter with the best ride quality in the segment. Our test scooter was equipped with the optional front disc brake which hasn’t been launched yet. They do a good job of shedding speeds with nice bite and progression though the rear tyre has the tendency to lock up under heavy braking. The new Suzuki Access 125 is also will swift on its toes and this can be credited to the 103kg kerb weight which makes it the lightest 125cc scooter on sale in India. The weight savings and the 12-inch dia front wheel make it an enthusiastic scooter to ride through the corners and the agile nature is fun as you squeeze your way past the traffic. 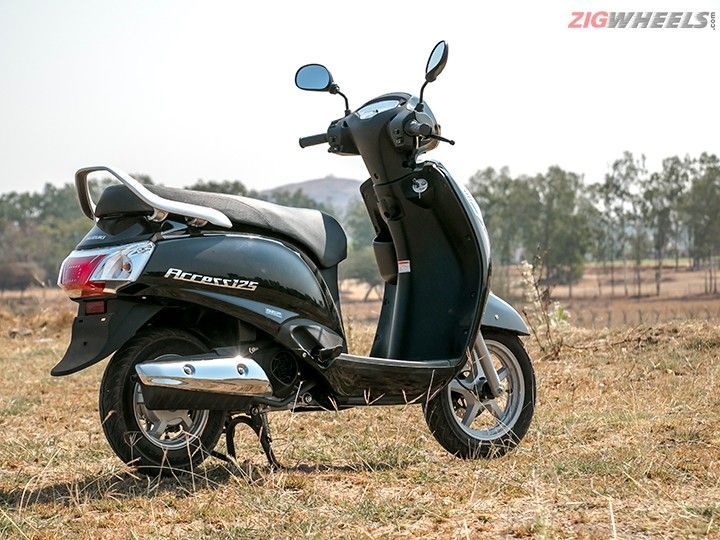 The scooter that we tested was the top-end variant Access 125 with disc brake and alloy wheels that hasn’t been launched in the Indian market yet. The base version of the new Suzuki Access 125 with steel wheels and drum brake has been priced at Rs 53,887 ex-showroom Delhi which makes it almost Rs 2,000 cheaper than the base Activa 125. As a product the new scooter ticks all the right boxes and is a marked improvement over its predecessor along with good mileage. 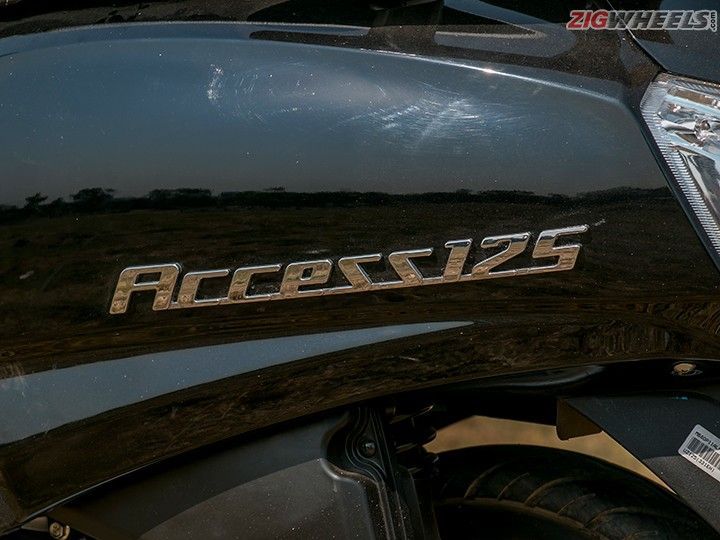 The square headlight and overall new design makes it unique and stand out in a crowd. Engine refinement and performance is the best in segment while lively handling and new list of features adds to its appeal. There are certain drawbacks like the plastic body and Suzuki’s restricted dealership network. But if you’re able to live with the above shortcomings and in the hunt for a powerful, comfortable and fun to ride scooter, the Suzuki Access 125 should be your pick.

The mileage of Suzuki Access 125 is 57.2 2 kmpl. This is the claimed ARAI mileage for all the variants of Access 125.
View User Reported Mileage

What is the Tyre and Wheel type of Suzuki Access 125?

Which is better Suzuki Access 125 or Honda Activa 6G?

What is the EMI of Suzuki Access 125 in Delhi?