Suzuki’s all-new Access has impressed us in a lot of ways, and feels better than the original. But can it reclaim its crown of being the best 125cc scooter? 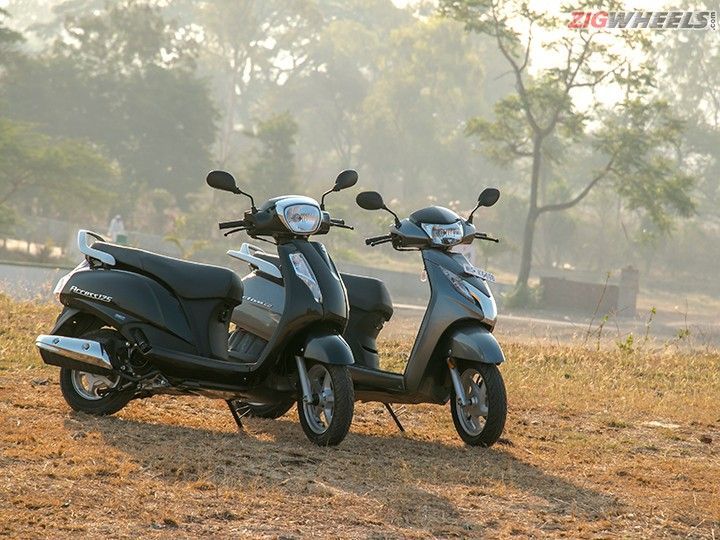 If there’s one scooter that has truly challenged the Honda Activa in terms of popularity, it has to be the Suzuki Access. With its larger 125cc engine, typical Japanese reliability, space and comfort the Access never had trouble becoming the choice of buyers wanting a family scooter. In fact, the Access has been so popular that Honda had to launch a bigger, 125cc version of its ever popular Activa to attract family scooter buyers.

Over the years the Access lost some of its sheen though. Of course, it was launched almost a decade back and has only received minor cosmetic changes since, which helped the Activa 125 do even better. To address the issue, Suzuki has launched the all-new Access 125. The new one has impressed us with its distinctive looks, plush ride quality and feature list. But can it better the Activa 125? A head to head comparison was just what was needed to answer that.

The older Access looked conventional like most others scooters, including the Activa 125. The new one though is a bold step away. It looks a lot more distinctive and retro, especially with the chrome surround for the rectangular headlamp. The stance is taller thanks to the clean front, long indicators and flowing lines. The horizontal angle of its exhaust though is a bit odd looking though, as compared to the sloping line of the side panel. The new Access also gets a 12-inch wheel upfront now as opposed to a 10 incher, along with the option of a front disc brake.  The clocks are extremely simple and easy to read with a white background, while the footboard and seat are flat and wide. Suzuki is saying the new Access has a metal body, though it’s only the front apron that’s made of metal.

The Activa 125 on the other hand looks a lot more conventional, and slightly similar to the Aviator with its Y-shaped, chrome apron in front. The Activa 125 also uses a 12-inch front wheel and gets the option of a disc brake too. Its design on the whole, especially the headlight and tail light are not too different from other scooters, which is good and bad. While on one hand its conventional design gives the Activa 125 a mass appeal on the other it does not look as distinctive as the new Access.

Being the newer product the Access scores better than the Activa 125 in terms of features and equipment. Its speedometer now integrates a small digital display like the Activa 125’s. Common features on both scooters are a digital fuel gauge, odometer and tripmeter but the Access gets two tripmeters and a service indicator too.

The Access also gets an optional mobile phone charger along with a little pocket to place your mobile phone, something the Activa misses out on. The pocket in fact is big enough to hold a one-litre water bottle. The Access also has larger underseat storage area than the Activa, though neither scooter can hold a full-face helmet.

Suzuki and Honda both have employed air-cooled, 125cc single cylinder engines and both scooters offer 8.7PS of power though the Access offers 10.2Nm as compared to the Activa’s 10.12Nm. Both brands are known for refined engines, and the Access 125 and Activa 125 are no exception as their engines feel extremely smooth. The Access also benefits from Suzuki’s SEP (Suzuki Eco Performance) which the brand claims reduces frictional losses, though the Honda is on par in terms of smoothness.

In terms of acceleration, the Suzuki feels wee bit quicker when taking off from standstill. Ride both scooters back to back and the Access feels a smidgen quicker, offering a better throttle response. The quicker acceleration is also courtesy the Access being 8kg lighter than the Activa 125, tipping the scales at 102kg as compared to 110kg for the Activa. The Activa makes up for the lost ground at the top though, boasting better top end performance than the Access.

Both scooters are meant to be full sized scooters and are comfortable with wide, soft seats.. Suzuki claims the seat on the new Access is the largest in class and it does feel bigger than the Activa’s. The Activa 125 is based on the Activa 110 whereas the Access was always meant to be a bigger scooter, and it feels that way, as its footboard is longer too.

The Suzuki’s handlebar is slightly higher than the Activa's which makes it more comfortable for taller riders like me. On the road the Access offers a plusher ride quality. Not that the Activa isn’t comfortable, but the reworked telescopic forks on the Access do a better job of soaking in bumps and undulations.

Both scooters are evenly matched as far as handling is concerned, offering a confident feel thanks to the telescopic forks and 12-inch wheels upfront. The Access and Activa both are never shy of going fast around corners and both slice through city traffic with utmost ease. But while the Honda performs its duties with a clinical precision, the Access feels more enthusiastic and sportier. To give you a perspective, the Activa feels like plain vanilla ice cream, while the Access is more flavourful, like butterscotch.

This is easily the biggest deciding factor for most scooter buyers, as they typically look for value for money and good fuel efficiency. Honda is claiming 59kmpl for the Activa 125 while Suzuki’s claimed figure for the new Access with its reworked engine is higher at 64kmpl. The Access could, in theory, return slightly better efficiency than the Activa 125 in the real world thanks to its lower weight, though it is possible both scooters return similar efficiency as that largely depends a lot on one’s riding style apart from the fact that both engines are on par with each other in terms of refinement and outputs.

Coming to pricing, the fully-loaded version of the Suzuki Access 125 you see here is not on sale yet, and Suzuki is currently offering only the base version with a front drum brake and steel rim which retails at Rs 53,887 ex showroom Delhi. The Activa 125’s base version in comparison retails at Rs 55,689, while its fully loaded version with alloy wheels and a front disc brake costs Rs 61,857. Given the price difference between their base versions, the disc brake version of the Access should cost lower than the Activa, with a price difference of at least a thousand rupees.

The 125cc scooter category has never been crowded with too many options, unlike the 100-110cc scooter segment. While we would have liked to include the new Mahindra Gusto 125 in this test, the manufacturer is yet to offer test scooters, leaving us with just these two products from equalled renowned Japanese brands. Both are equally refined, well-built, comfortable to ride and confident handlers. The new Suzuki Access 125 manages to better the Honda Activa 125 by a small yet discernible margin though with its lower price and longer feature list, sportier feel and peppier bottom end performance.

It isn’t difficult to notice that the new Access has improved a lot not just on its own but in comparison to its arch rival too. The Activa 125 was the newer product in the segment till recently, but Suzuki has upped the game with the new Access. It is the Activa 125 that feels slightly dated now, even though there's absolutely nothing wrong with it. The Access also looks distinctive and likeable with its fresh design while being more comfortable and affordable. Time for Honda to make a move now.