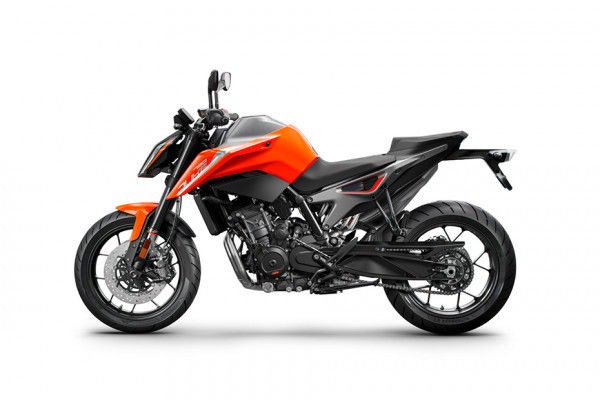 Alert me when launched Ask A Question
790 Duke Colors
rvmp_n_gpopup

The KTM 790 Duke R has been spotted testing overseas and looks near production-ready. Compared to the standard model, the 'R' variant comes equipped with a premium WP Apex Pro suspension setup, adjustable rearset footpegs, updated brakes from Brembo and billet triple clamps. The engine also features additional sensors that hint at a Euro5 compliant engine. It’s likely to be unveiled at the 2019 EICMA motorcycle show.

KTM has launched the 790 Duke in India at Rs 8.64 lakh (ex-showroom India). These are introductory pricing and would increase later. The bike has been brought to India via the CBU route. Bookings for the 790 Duke have officially opened at select KTM dealerships. Booking amount is Rs 5,000 to Rs 25,000 depending on the dealership. The 790 Duke will only be available in 9 cities for now. KTM’s plans for the BS6-compliant 790 Duke have also been revealed and you can read all about it here.

In terms of styling, the 790 Duke is similar to the 390 Duke but has larger dimensions, a different frame, wheels, exhaust and tail-section. It also gets a full-LED headlamp and colour TFT instrument console. The motorcycle comes loaded with features such as lean-sensitive traction control, cornering ABS, multiple power modes, launch control and even wheelie control!

Powering the motorcycle is a newly developed LC8 799cc, liquid-cooled, parallel-twin motor pumping out 105PS at 9500rpm and 86Nm of peak torque at 8000rpm. The DOHC motor is mated to a 6-speed gearbox with a slipper clutch. It gets 43mm open cartridge WP front fork and a 12-stage preload-adjustable WP rear monoshock. Braking is via twin 300mm front discs with radially-mounted J Juan calipers and a 240mm rear disc. Tyres are MAXXIS Supermaxx ST radials.

It competes against four-cylinder rivals such as the Suzuki GSX-S750 and the Kawasaki Z900, which are priced at Rs 7.46 lakh and Rs 7.68 lakh (ex-showroom Delhi) respectively.

KTM has launched the 790 Duke in India at Rs 8.64 lakh (ex-showroom, India). The motorcycle is being brought here via the CKD route all the way from Austria. Official bookings have commenced and the bike will be available in selected dealerships. KTM is also offering a finance option with a tenure of up to 5 years for the bike.

Powering the motorcycle is an LC8c 799cc, liquid-cooled, parallel-twin motor, which churns out 105PS of power and 86Nm of torque, paired to a 6-speed gearbox and a slipper clutch. It is built around a tubular steel frame, which uses the engine as a stressed member. The suspension duties are handled by adjustable WP USD forks at the front and WP monoshock unit at the rear. Braking is taken care of by 300mm disc at the front and a 240mm rear disc.

In terms of design, the 790 Duke follows similar cues seen on the Duke series like the 390 Duke and the range-topper 1290 Duke. It sports the same inverted pitchfork shaped LED headlamps, aggressive bodywork and an sharp overall design. However, unlike the 390 Duke, it gets a stainless steel, high-mounted, upswept exhaust and a slightly longer wheelbase. Features include ride-by-wire throttle control, different riding modes, multi-level traction control with lean angle sensitivity, ABS, launch control and a quick shifter. There's also a similar looking coloured TFT instrument console like the 390 Duke. However, the speedo and the tacho readouts are bigger.

Triumph Street Triple S: Perhaps KTM’s closest competitor, the Triumph Street Triple S offers high-performance numbers across the board. However, its high asking price of Rs 9.19 lakh will be too much of a stretch for some customers, especially considering that the KTM can be had for Rs 55,000 less.

Suzuki GSX-S750: Again, the Suzuki offers more power across the board here. However, if you look at the horsepower per rupee fight, the GSX-S750 has a bit of a disadvantage when compared to the Kawasaki Z900.

Kawasaki Z900 : The Kawasaki Z900 is currently the most value-for-money prospect here. However, the electronics here, or rather lack thereof, hinders its prospect of being the segment leader.

Ducati Monster 797 : While the Ducati may look like a tempting buy, the specs and the pricing tell a different story. It churns out less power, packs comparatively less number of electronics and costs more than its competition.

KTM 790 Duke is going to launch in India with an estimated price of Rs. 8.63 Lakh

Is the 790 Duke’s high asking price and somewhat paltry spec sheet straying away from KTM’s bang-for-buck mantra in India?