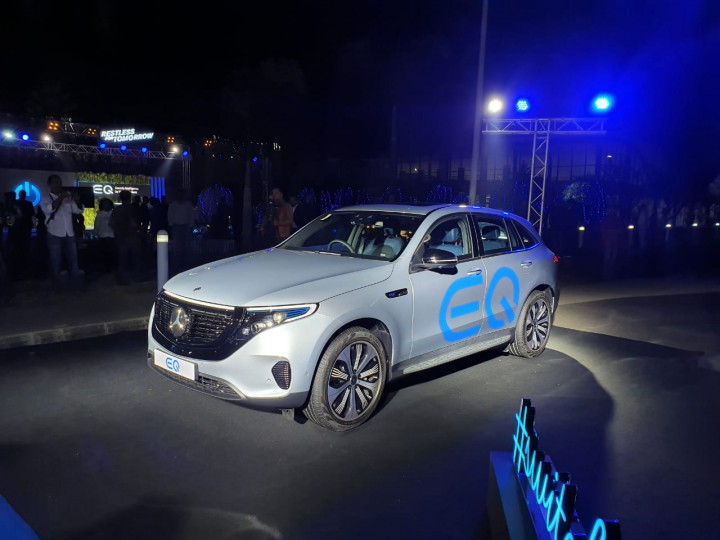 Mercedes-Benz India has revealed the EQC electric SUV in India as part of the EQ all-electric brand launch today. The EQC will be Mercedes’ first electric car for the country and could debut as India’s first luxury EV. The upcoming EV will be showcased at the Auto Expo 2020 ahead of its April 2020 launch. The EQC was unveiled globally in May 2019. Mercedes has unveield the EQC Edition 1886 for India which is available exclusively in metallic high-tech silver shade.

The Mercedes-Benz EQC is powered by twin electric asynchronous motors that sit on either axle and drive all four wheels. They develop a combined output of 408PS of power and 760Nm of twist right from the get-go. The SUV does the 0-100kmph run in 5.1 seconds, which is mighty quick!

The electric motor draws power from a floor-mounted 80kWh battery pack and has an NEDC claimed range of 445-471 km. Further, there is a break regeneration function that recuperates the energy and charges up the battery during deceleration. The battery pack also supports fast charging and is capable of 10-80 per cent in 40 minutes. Further, Mercedes will install a Wallbox charger in your parking lot. The EQC can be charged via a domestic power socket as well.

Visually, the EQC is a smart-looking SUV with a sleek design. The front-end comes with a slatted grille, a large tri-pointed star, and sleek LED headlamps that are connected by a slim DRL. At the side, the EQC comes with a relatively clean no-nonsense design with turbine-style alloy wheels. Moving on to the back, highlights include connected tail lamps and sporty black trims on the bumper. The EQC Edition 1886 also gets high-gloss black badge with ‘EQC Edition 1886’ inscription on the mudguard and 20-inch light-alloy wheels in high-gloss black.

Inside, the EQC’s dashboard layout looks similar to other Mercedes cars. The central console is a straight lift off the updated GLC while the twin-screen setup reminds us of the E-Class. However, the EQC gets its own set of distinguishing design elements. For instance, there is a strip of ambient light that runs around the twin screens, giving it a cool touch. With the EQC Edition 1886, you also get special touches like upholstery in ARTICO man-made leather/ DINAMICA microfibre in indigo blue and black along with 'EQC Edition 1886' embroidered into the seat backrests, centre console and the floor mats.

Prices of the Mercedes-Benz EQC are expected to start from the Rs 1 crore mark. When launched, the electric SUV will lock horns with the upcoming Audi e-tron and Jaguar i-PACE. Stay tuned to ZigWheels for all the updates.