A Closer Look At The Mercedes-Benz EQC In 11 Images

Slated for an April 2020 arrival, this EV was showcased at the launch of the Mercedes-Benz EQ electric brand 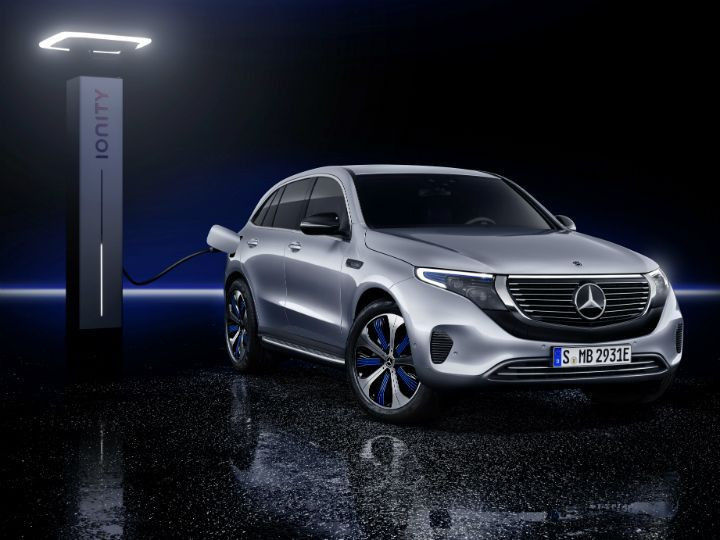 After its global unveil in May 2019, Mercedes-Benz has finally revealed the EQC electric SUV on Indian shores as part of the EQ all-electric brand launch. This is the first Mercedes-Benz EV for India and will make a presence at the upcoming Auto Expo 2020. So, let’s take a closer look at it in detailed images:

The carmaker unveiled the EQC Edition 1886 for India, which exclusively gets a metallic high-tech silver shade.

Design highlights at the front include a slatted out grille with a large trademark tri-pointed star, and sleek LED headlamps connected by a slim DRL.

From the side profile, the EQC gets a relatively clean design with the main talking points being turbine-style alloy wheels.

The clean design continues at the rear of the SUV with wrap-around connected tail lamps and black trims on the bumper.

An interesting addition to the EQC 1886 Edition is a gloss black badge, as well as 20-inch gloss black alloy wheels.

Head inside, and you’ll notice that the EQC’s dashboard design is similar to modern Mercedes-Benz cars, like the central console from the GLC and the twin-screen setup from the E-Class.

The EQC does have some distinct design bits like ambient lighting around the twin-screen setup as well as special tweaks in the EQC Edition 1886. Changes include ARTICO man-made leather/DINAMICA microfibre in indigo blue, black upholstery, and 'EQC Edition 1886' inscription on seat backrests, centre console and floor mats.

It comes loaded with features like an MBUX infotainment system with Apple CarPlay and Android Auto,  Burmester sound system, digital dials, a sunroof, and connected car tech. Safety features include ABS+EBD, ESC and a 360-degree camera.

Under the hood, it is powered by twin electric motors developing 408PS and 760Nm combined and distributing power to all four wheels. All this power makes the SUV pretty quick with a 0-100kmph sprint in 5.1 seconds.

While the EQC is quick, it is also pretty efficient. The electric motors are juiced up by a floor-mounted 80kWh battery pack with an NEDC claimed range of 445-471 km. It also supports fast-charging with a 10 to 80 per cent charge in 40 minutes. The electric SUV also features interesting EV tech in the form of brake regeneration, where energy under braking is utilised to charge up the battery.

Post its Auto Expo 2020 showcase, Mercedes-Benz will launch the EQC in India by April 2020. Expect a price tag starting from Rs 1 crore (ex-showroom). Once launched, it will take on the likes of the Audi e-tron and the Jaguar i-PACE.