Built by Honda’s R&D centre in Rome, the CB4 Interceptor concept is the Japanese manufacturer’s interpretation of what a “retro” café racer of the future might look like 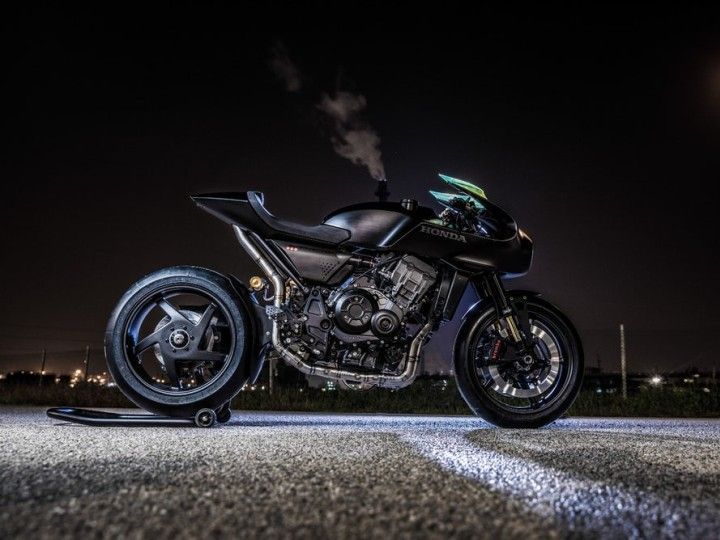 Some of the wildest and most beautiful concepts we have seen from Honda in the recent past have come from the company’s technical centres in Europe. This time round, it is no different as Honda took the wraps off the CB4 Interceptor concept at the ongoing Milan motorcycle show. Designed by Honda’s R&D centre in Rome, the CB4 Interceptor is part of Honda’s ongoing research around the ‘Neo Sports Café’ design theme that we first saw in the CB4 Concept at EICMA in 2015.

With the Interceptor, Honda’s aim was to meld together the café racer style with futuristic design while retaining the classic “retro” look. And going by these pictures, we must say that they’ve succeeded in their pursuit, for the CB4 Interceptor looks stonking hot. Except for the “CB” tag, it bears no relation to the VFR models from the 80’s; rather, it seems to share mechanicals with the CB1000R.

Done up in all black, it appears as if the CB4 has no frame at all; if it has, it is well hidden indeed. Look closely behind the engine block and you will spot the small structural unit on which the subframe, footpegs and single-sided swingarm appear to be mounted. Other than that, the engine itself seems to be handling much of the weight up until the steering head and fuel tank. Things are no less clever at the rear: Where did that snaking exhaust pipe disappear?!

But here’s the real kicker: "The front of the bike features a fan used to convert the motorcycle's kinetic energy to power the touchscreen located on the tank." Go ahead, take another long hard glance at it now, because there’s no way that thing is going to pop up at your local Honda dealership anytime soon. I mean, what’s wrong with powering it off the bike's regular electrical system the good old way?

Honda hasn’t revealed anything about the engine yet, but we’re guessing it is the 4-cylinder 399cc engine from the CB400 – never mind the “1000R” sticker. And of course, this being a concept, there’s no mirrors, indicators, license plate holders or any other kind of encumbrance our nanny states throws at you.

And even if the CB4 Interceptor never sees the light of the day, we can’t help but hope that some of its design touches rubs off on production Hondas of the near future. Hey, it never hurts to dream, right?