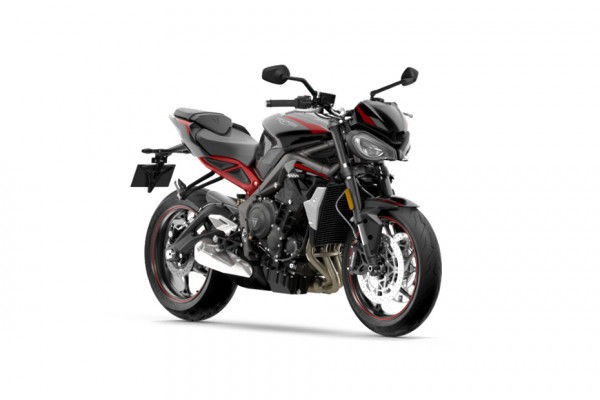 Triumph has launched the new entry-level Street Triple R in India at 8,84,000 (ex-showroom, pan India) -- Rs 2.49 lakh cheaper than the RS (ex-showroom), which makes it the most affordable motorcycle in the Street Triple range. It also puts it squarely against the 2020 Kawasaki Z900, BMW F 900 R the BS4 KTM 790 Duke. Select dealerships have already begun accepting bookings for the bike. It will be the first time the Street Triple R, positioned below the Street Triple RS, is on sale in India.

Recently, the 2020 Street Triple RS received a small price revision, taking the asking price up by Rs 20,000. It is now priced at Rs 11.33 lakh (ex-showroom India). Earlier, the price for the updated RS model was the same as the outgoing BS4 version of the bike. The streetfighter gets design tweaks, more features, and an updated motor for this year. The RS still remains the most expensive mid-displacement streetfighter in India.

The third variant, the Street Triple S, which packs a smaller 660cc inline-triple motor, won't make it to India.

The Street Triple RS and R use the same Euro 5/BS6-compliant 765cc in-line 3-cylinder engine. That said, they've been turned to put out different power outputs. The RS, for instance, makes 123PS at 11,750rpm and 79Nm at 9350rpm. As for the Street Triple R, it produces 118PS at 12000rpm and 77Nm at 9400rpm. Both bikes feature a 6-speed transmission aided by a slipper clutch. Differences extend to the bike's hardware as well. Though both bikes use an upside-down fork from Showa, the RS comes with high performance big piston units (BPF) while the R uses separate function big piston forks (SF-BPF). The same goes for the rear monoshock, where the former makes use of a fully-adjustable Ohlins STX40 shock with piggyback reservoir while the latter makes do with Showa unit, also fully-adjustable.

It's hard to differentiate between the three models except for the colour schemes. The trio come equipped with sleek looking LED headlight and DRLs. The flyscreen and side panels are identical too! What sets the RS apart from the other variants is its belly pan, bar-end mirrors and carbon fibre insert on the exhaust end cap. The top-spec RS variant comes with a full-colour TFT display with Bluetooth connectivity which offers turn-by-turn navigation and phone/music control. It also features GoPro integration, a bi-directional quick-shifter and different riding modes. The 'R' variant, on the other hand, gets a bi-directional quick-shifter.

The Street Triple RS goes up against the KTM 790 Duke which is pretty evenly matched in terms of features and electronic rider aids. But if you were to take price into consideration, it takes on the Yamaha MT-09 and the Ducati Monster 821. The slightly cheaper R variant goes toe-to-toe against the Kawasaki Z900.

What is the price of Triumph Street Triple?

Does the Triumph Street Triple have ABS?

Which is better Triumph Street Triple or Kawasaki Z900?

What is the EMI of Triumph Street Triple in Delhi?

What are the colours available in Triumph Street Triple?