The Triumph Street Triple RS, a brilliant first-time big bike, has been updated for 2020. But how? 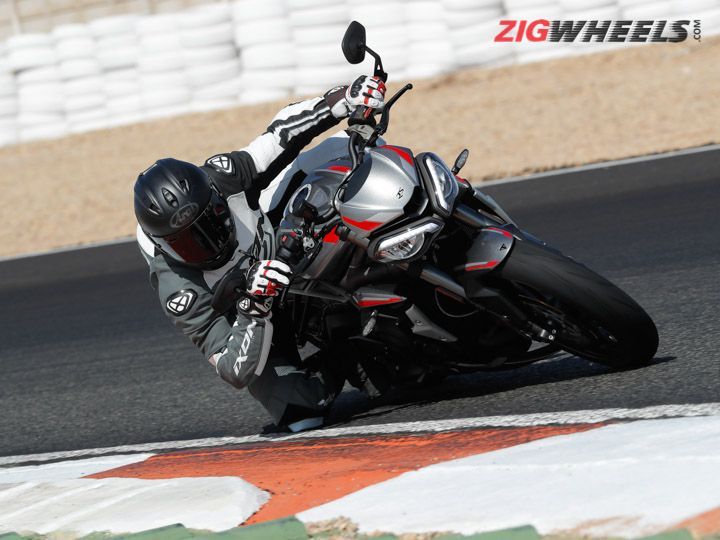 If there was a Sportbike Riding for Dummies, Triumph’s Street Triple would have authored it. Its supersport levels of handling finesse combined with the practicality and comfort of a naked motorcycle have made it the go-to motorcycle for those dabbling with premium wheels. The new generation Street Triple RS launched in 2017 proved to be a riveting ride even for fast riders. But when we compared the Triumph with Yamaha’s MT-09 a few chinks in the RS’ armour were exposed. More recently, KTM’s 790 Duke has pushed the goalposts ahead. So how does the Triumph RS plan to defend its turf? This perfectly timed 2020 Triumph Street Triple RS press ride ought to give us some answers.

Also Read: Triumph Plans To Start 2020 With A Bang!

Paper Games
On paper, there’s no seismic change with the RS. But if you connect all the dots, the RS looks set to spar with its wilder rivals from Japan and Austria with more vigour now. You have 79Nm of torque now (up from 77Nm), which also comes in at a much lower 9350rpm (vs10800rpm) and Triumph says there’s 9% more torque in the mid range. A new intake, new exhaust cam, lighter gear-train with tighter tolerances and a revised exhaust would have something to do with that. Sure, there’s no change in peak power but there are more horses available from lower rpms. This is all the more impressive as it is now Euro 5 emission norms compliant! Triumph say they used a two-way catalytic-converter setup to keep the free revving nature intact. And it should feel even faster down the straights and in the bends because of the shorter gearing for the first two gears and lightened engine internals. Rider modes have also been adapted to make the most of these changes and it also packs an up and down quickshifter as standard. The result?

Class of Cartagena
Also called Circuit Cartagena. Imagine barrelling straight into a closed door, knowing that it would open as you got closer, but not knowing what lies beyond it. Now imagine doing this at 180kmph. Right or left? In or out? Sink or swim? This school demanded the rider and machine come together as one. Double fast.

The first lap was a mess. The rider-made hash made one thing clear: the RS has your back, solid. Grab the mighty Brembo M50s mid-corner in panic, as I did, and then just carry on as if nothing happened. IMU be damned, the incredible Pirelli Supercorsa SP v3s seem to shrug. Slick-like shoulders and reworked design for a bigger footprint means you can lean on them even more. The accomplished Showa forks and Ohlins monoshock reprise their duties on the RS without any revisions -- after all the overall weight and top speed has remained unchanged. As expected the RS turned, stopped, slid and leaned with the grace and flexibility expected of it. The only change is that the RS’ abilities are more elaborate and the safety net is cast wider. However, to keep the top dog status in the increasing competition the RS needed to do more.

What more?
The engine, and it really has stepped up to have a greater say in the RS' magic quotient. The 765cc three-cylinder engine now brings raw grunt without compromising on its sophistication and punchy top-end power. Earlier, entering a slower corner in a higher gear was a strict no-no. Not anymore. Attacking the long uphill right hander, the extra grunt meant you didn’t have to downshift when entering the corner. Steady throttle, you climb up and then drop the bike in for the late apex. As the crest comes nears, you pick up the RS and gas it, letting all 79Nm drive hard into the tarmac. Immensely enjoyable! Greater amount of slip in the Track and Sport modes allows you to enjoy this added performance even more. Clutchless gear changes become second nature thanks to the smoothness and precision of the new up-and-down quickshifter. It is good enough that you could easily use it around town. But you won’t need to, as the new RS is more torquey between 2000-4000rpm too, so you could stick it in one gear for commuting and get away faster than before. Bottomline: the new RS will be faster, nicer and more importantly a lot more fun. So the RS might not laugh raucously like some of its rivals, but it wears a telling smirk now.

Still street-friendly?
Usability is core to the RS experience in every way, and so the seat height at 825mm remains friendly even for shorter riders. The pillion seat has been redesigned to create more room and comfort. As before, the five rider modes will allow you to customise throttle response, traction control and ABS. What's impressive is the span- and ratio-adjustable front brake lever which lets you customise the amount of effort required when braking, which means easier use on the street too. The Pirellis are said to offer more even wear too. The quality remains top notch and the sense of premiumness is unchanged.

Pack much?
You can see there are no major updates, but there are plenty of tweaks. The new LED headlamp with LED DRLs will give it the much needed “new gen” quotient, but calling them pretty is debatable. The new silver finish for the frame and the carbon fibre-tipped chunky exhaust also add to the newness quotient. Apart from the tank, most panels have been changed, like the larger flyscreen, the sharper radiator shrouds and panels for the tail section. The cowl for the pillion seat cements the sporty look and will be offered as standard along with the pillion seat. Riders will clamour for the cool swipe-type turn indicators that are now offered as accessories.

In terms of features, the TFT display has four new themes, each with four colour options. However, the layouts are cluttered and difficult to use on the go. There’s an optional bluetooth module that allows for phone integration to let you manage calls and music. You could also read the text messages on the colour TFT, but only when stopped. Using bluetooth, it is also possible to connect to a GoPro and control it via the switchgear. When paired, key stats of the camera can be seen on the display. Yeah, it had to happen.

Upgrade worthy?
While the 2020 Triumph Street Triple RS is more accomplished, better equipped and more fun, it won’t tempt existing owners terribly. Riders looking to upgrade from smaller motorcycles will find the RS even more appealing, especially since Triumph has indicated that the prices will remain more or less the same. So the Street Triple RS has kitted up to take on the competition and if, like us, you can’t wait to get your hands on it in India, January 2020 couldn’t come soon enough!