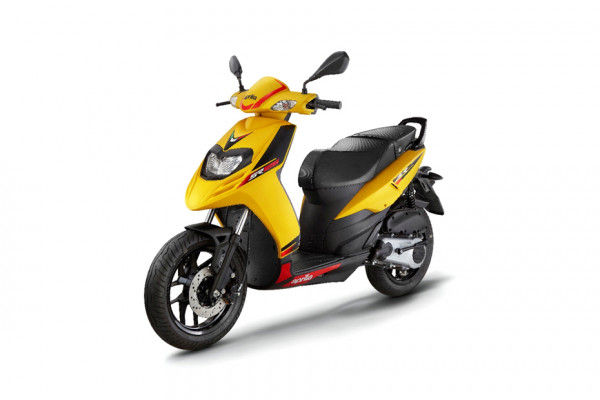 Aprilia has discontinued the SR 125 from the Indian market. The brand intends to keep the ‘SR’ badge premium and its only 125cc scooter offering will be the Storm 125. The SR 125 BS6 will be available on sale until stocks last. The Aprilia SR 125 looks exactly like its bigger sibling, the SR 150, albeit for the redesigned stickers. But surprisingly it doesn't pack the same amount of fun and thrill factor that the SR 150 possesses. For more details, check out our in-depth Road Test comparison with the Suzuki Access 125 and the TVS NTORQ 125.

Powering the scooter is the same engine that is seen on the Vespa 125. This 124.7cc air-cooled, single-cylinder motor churns out 9.52PS of power and 9.9Nm of torque. The telescopic front and rear monoshock is as stiff as seen on the SR 150, while braking is done via a 220mm front disc and a 140mm rear drum setup, which has a strong brite.

There's no denying the fact that the Aprilia SR 125 looks exactly similar to its elder sibling, the SR 150. However, it does gain some subtle changes, such as the 'SR 125' monikers, some stickers as compared to the SR 150 and a new wider rear section. In terms of features, it packs a two-pod analogue console, a higher set grab rail, wider seat and 14-inch wheels.

TVS Ntorq 125 : When it comes to performance, the NTorq 125 feels fairly close to the Aprilia SR 125. However, it excels in terms of practicality by offering a plethora of features such as a digital instrument console with Bluetooth connectivity, navigation assist, a mobile charging socket, a softer suspension setup and more. While offering all this, it also undercuts the SR 125 by a great margin at Rs 58,750 (ex-showroom Delhi).

Honda Grazia: The Grazia offers admirable build quality and typical Honda engine refinement. It isn’t as feature rich as the NTorq though. But it does come with LED headlights and a digital console. Underseat storage is admirable and the floorboard space is also better than the SR and the NTorq. On the downside, the front suspension setup feels a bit too stiff while the rear gets jumpy with a pillion on board. In terms of features, it checks all the boxes when it comes to convenience and practicality. At Rs 63,415 (ex-showroom Delhi), it undercuts the Aprilia marginally but is almost Rs 4,500 costlier than the NTorq. Unfortunately, it doesn’t offer the fun factor of the NTorq or the Aprilia. Neither does it offer the practicality of the Suzuki Access.

Suzuki Access 125 : The Suzuki Access 125 sports the most mature look of the lot. It feels peppy, has decent enough features for a family scooter and is the best of the lot when it comes to suspension setup and ride quality with the NTorq ranking second on these fronts. Braking too feels confident and space is ample, on both the floorboard and under the seat.

What is the Tyre and Wheel type of Aprilia SR 125?

No, ABS feature is not available in Aprilia SR 125. View full specification of SR 125.

Which is better Aprilia SR 125 or TVS NTORQ?

What are the colours available in Aprilia SR 125?