The SR 150 ruled our hearts with its performance and handling capabilities. And now the SR 125 is here, promising us the same kind of character while being lighter on the pocket. So does it live up to our expectations? 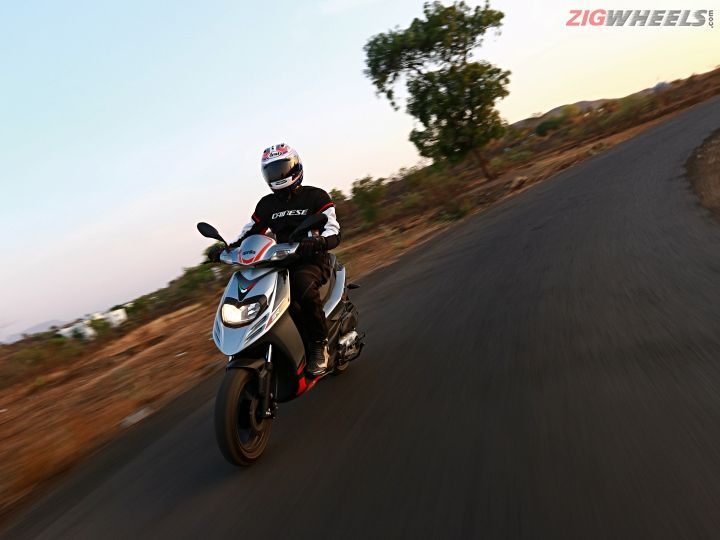 The Aprilia SR 150 brought with it a breath of fresh air for those aching to own and experience a sporty scooter in India. Now though, in a bid to increase its appeal, Aprilia has launched a smaller displacement version, called the SR 125. The new scooter shares its 124.49cc motor with the Vespa 125 but retains the handling dynamics of its larger sibling. It’s time to find out whether it still has the flair to put a grin on our faces or has the drop in performance really taken a toll on its youthful character.

Park the SR 150 and the SR 125 next to each other and there’s almost nothing to differentiate one from the other as they both use the exact same bodywork. However, what the SR 125 gets are new graphics and a seat that’s a bit thicker at the back. There’s also a wider range of colours to opt from. On the features front, the SR 125 seems outdated.

The instrument cluster is an analogue setup and there's no trip meter either. Features like a charging point or even a boot light, which have are now offered as standard in most scooters, are also missing here.

Even the rear view mirrors fail to offer great visibility as the stalks are extremely short with barely any adjustment to reposition them. That aside, the switchgear quality is just about acceptable but could have been better.

The overall fit-and-finish though leaves a bit to be desired as there were noticeable panel gaps on the front apron and the sides - not something you would expect after shelling out a premium over other 125cc scooters present in the Indian market. And although its dual-halogen headlamp looks good, it fails miserably in providing adequate illumination in the dark.

What we do like though is the overall stance of the scooter - slim and tall, thanks to its segment-largest 14-inch alloy wheels and chunky tyres.

The Aprilia SR 150 had thrilled us with its unabashed focus on performance. Shockingly though, the SR 125, even though it makes a segment-leading 9.65PS of power coming in at 7250rpm, manages the 0-60kmph in a dismal 9.71 seconds. This makes the SR 125 the slowest 125cc scooter we have ever tested. This lack of performance can be attributed to its surprisingly heavy kerb weight of 120kg (the highest in the segment) and the large 14-inch wheels which have a lot of inertia getting off the line. And where the SR 150 Race edition set the benchmark for all scooters with its aggressively tuned CVT, the SR 125 disappoints yet again when it comes to overtaking acceleration, posting the slowest 20-80kmph time in its category - a whopping 18.79 seconds. As far as top speed goes, the SR 125 manages a true speed of 98kmph with the speedometer displaying an overly optimistic 120kmph.

But where the SR 125 fails to deliver in terms of performance, it makes up for in terms of efficiency. In our city test, with speeds kept below 50kmph, the scooter managed to deliver 47.6kmpl. And on the highway, with speeds hovering between the 60-65kmph mark, that figure jumped up to 52.5kmpl. These figures are a significant improvement over the SR 150’s fuel economy and easily at par with the rest of the 125cc segment. With a 6.5-litre fuel tank, that’s the highest in the segment, you’re looking at far fewer trips to the petrol pump when compared to any other 125cc scooter.

Seating comfort is always one of the top priorities while opting for a scooter. And on that front the Aprilia SR 125 is kind of a mixed bag. I’m 6 feet tall and I could get my feet flat on the ground without any issues. But the seat is still a bit on the higher side. Riders who’re around 5’5” or so, will have to shuffle as forward as possible on the seat to get both their feet down. The seat too is a bit on the firmer side, so those used to plush scooter seats will find it takes a bit of getting used to. But that said, it isn’t uncomfortable by any means.

Lengthwise, the seat looks small, but surprisingly there’s a decent amount of room for even someone on the heavier side. The overall seating posture is pretty good and while the handlebars don’t quite feel tall, they never interfere with the rider’s knees when taking U-turns. However, pillion riders will miss the grab rails at the back. Aprilia does offer them as an accessory on the SR 125 though.

The SR 125’s floorboard is set a bit on the higher side and also provides the least amount of space in its category. So forget about carrying too much luggage near your feet. And if you, like me have size 10 feet or larger, then you’re going to have absolutely no space on that floorboard. There is a luggage hook though, so you could hang a small shopping bag there if you wanted. But there are no other cubby holes or any other storage pockets anywhere on the scooter.

The underseat storage is also the smallest we’ve seen in this class of scooter. So while it can carry your essentials, large items are simply not going to fit in the boot.

The SR 125 shares its suspension setup with the SR 150 - telescopic front forks and a monoshock at the rear. Just like the 150, the SR 125’s suspension is extremely stiff. So you do get the fantastic handling that made the larger Aprilia scooter such a hoot to ride. However, you also get its absolutely harsh ride quality. So it isn’t just large undulations and rumble strips that will give you grief, you’ll even feel small ripples of tarmac through the handlebars and the seat of your pants.

Show it a couple of corners though (on smooth tarmac of course), and the SR 125 will have you smiling from ear to ear. The larger wheels along with the chunkier 120-section tyres do demand a bit of steering effort to change direction, but those same tyres (made by Vee Rubber) hold beautifully once the bike is leaned over, inspiring plenty of confidence mid-corner.

Even the braking components have been carried over from the SR 150, with a 220mm single disc up front and a 140mm drum brake at the rear. The front brake provides excellent feedback with great bite, and you’ll rarely need more than two fingers to shed speed swiftly and precisely. So while its braking distance of 19.63 metres from 60kmph isn’t the best in class (as it has to haul more mass to a stop), its brakes certainly have the best feel.

Clearly, with the SR 125, Aprilia has tried to give its scooter range more mass appeal. At Rs 66,764 (ex-showroom Delhi), the SR 125 is more affordable than the SR 150 not only in terms of buying cost but running cost as well thanks to its increased fuel efficiency. But in a bid to make it make it lighter on the pocket, it’s lost so much performance that it can’t even keep up with the likes of the family-friendly Suzuki Access. And while the SR 150’s extremely harsh ride quality and lack of practicality were acceptable for the levels of performance it offered, on the SR 125, it’s simply impossible to justify.

To sum it up, if you are looking for a scooter that offers thrills and performance, it makes sense to shell out Rs 4,000 more and go for the SR 150. But if you need the practicality the 125cc segment offers, then you’re better off looking at its competition.