How much SR is the new 125 from Aprilia 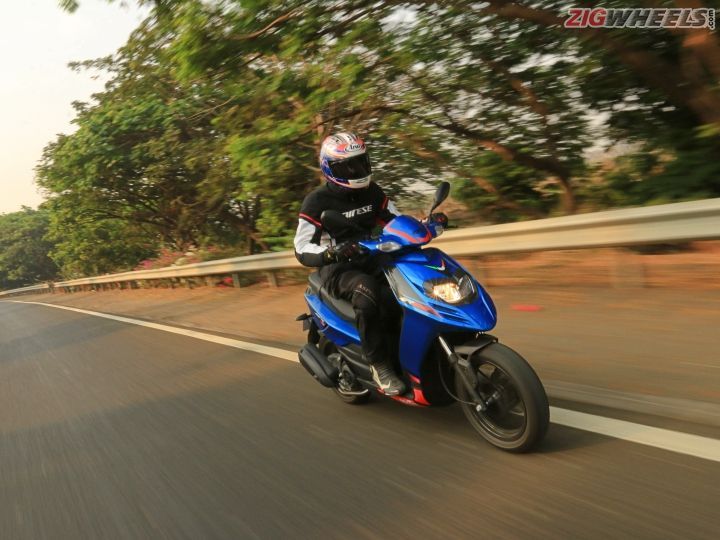 The SR 150 is a moto-scooter in the truest sense. It comes with a powerful 150cc engine and an agile chassis good enough to shame motorcycles. This is enclosed in edgy bodywork that screams sporty. But all that sportiness comes with some compromise as well. More performance led to an extra gruff-sounding motor; sharp handling led to stiff ride; sporty design led to restricted space for both the rider and pillion, not to mention cargo.

The new Aprilia SR 125, then, promises to be more accessible to a larger audience, in terms of price, performance and practicality. The question remains -- how much of the Aprilia DNA does it retain?

The SR 125 looks exactly the same as the SR 150. Minor revisions, though, come in the form of subtle graphic changes. The front apron has the ‘SR 125’ moniker on both sides. The rear gets fewer stickers than the larger SR. But the biggest update here is the new paint schemes, and the metallic blue one we sampled is a real head-turner.

And we believe the reduction in the amount of body graphics allows it to retain its sportiness and still be appealing to a more mature section of the audience. Space remains at a premium though, especially on the front floorboard, which cannot accommodate anything larger than a regular-sized backpack. As before, boot space remains slightly below average. On the plus side, the large 6.5-litre fuel tank has thankfully remained the same too.

One of the major bugbears of the SR 150 is its small pillion seat. The SR 125 corrects it with a new seat that has a longer and wider rear section. While the rider seat profile and stiffness remains the same, the stitch pattern has been revised. It is also a single black colour instead of the two-tone unit on the larger SRs.

We like it as it blends well with the rest of the bodywork. Rear seat comfort has improved a bit thanks to the softer cushioning that feels just right. The extended seat eats into the rear space, forcing Aprilia to drop the split grab handles. You do get a pillion strap across the seat, but Aprilia does offer an optional single-piece grab rail too.

Acceleration is quite good. It reaches 60kmph with ease but slows down a bit thereafter on the run to 80kmph. Performance feels on par with the TVS NTorq, though a proper test is needed to give a definitive verdict on which is faster.

What is impressive is the refinement the new motor offers. While the SR 150 feels more audible and harsh, the SR 125 feels smoother, with minimal vibes filtering in while accelerating from a standstill or at high speeds. The engine and CVT transmission package makes for a smooth yet quick moto-scooter. Given its lesser cubic capacity and relaxed state of tune, expect better fuel efficiency than the SR 150 - 45kmpl as the company claims in real-world conditions (not test conditions).

This is one area where we wish Aprilia would have offered a softer suspension setup. The SR 150’s front telescopic forks and monoshock have been carried over as is. The stiffer front judders over bad road surfaces and transfers ruts and road edges to the rider’s hands via the handlebars. This harshness will put off some prospective buyers.

The stiffer suspension, though, translates to sharp and agile handling similar to the larger SR 150. The rear suspension, though on the stiffer side, does a great job of damping out bumps and potholes. Its large 14-inch wheels fitted with sticky Vee Rubber tubeless tyres grip well and allow for serious lean angles on this scooter. Aprilia seems to have toned down the initial bite of the 220mm front disc and 140mm rear drum setup for a more progressive and confidence-inspiring feel for newer riders, though braking remains strong and progressive. When it comes to ride and handling, the SR 125 feels exactly like the SR 150, and we like it.

How much of an SR is it?

The SR 125 makes Aprilia’s SR moto-scooter more accessible and usable and should appeal to a wider audience. The sporty chassis and bodywork now gets a smaller, more refined motor that won’t scare newer riders and should be easier to live with. A larger pillion seat should keep the better half happy as well. Compromise comes in the form of missing pillion grab rails and stiffer suspension.

Handling, though, is its major highlight, probably making it the sportiest 125cc scooter around and the best to attack twisties with.

At Rs 65,310 (ex-showroom Delhi) the Aprilia SR 125 undercuts the larger Aprilia SR 150 by a substantial Rs 5,000. For that, what you miss out on is a little bit of horsepower. As for the Aprilia SR DNA, it remains intact and in the process gets more usable, and, dare we say, more appealing.