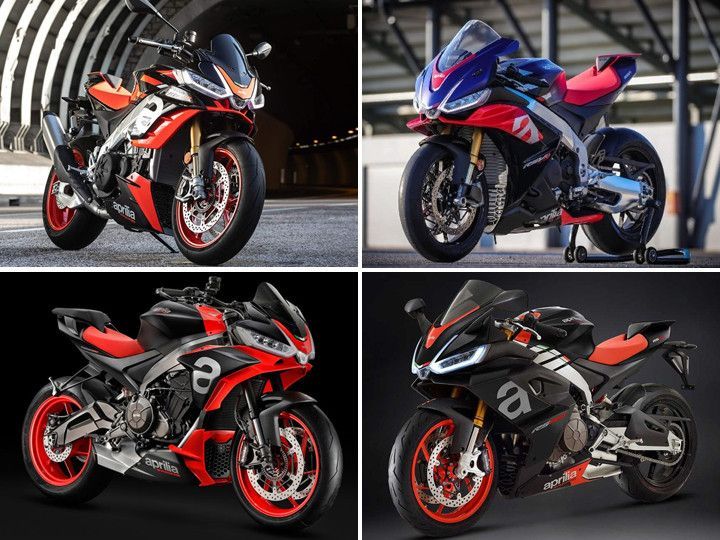 Aprilia has finally launched its 2021 big bike model range in India. This includes the new RS 660, Tuono 660, Aprilia RSV4, and the Tuono V4. This doesn’t come as a surprise since the first shipment of the bikes had already made it to the Baramati plant a few weeks ago.

This is the first time that the mid-displacement supersport has been launched in India. It’s developed on Aprilia’s all-new 660cc parallel-twin platform that also supports the Tuono 660. The bike features a new aggressive design, a host of electronics, and some potent hardware. You also get a pretty explosive 660cc parallel-twin motor churning out 101PS. That makes the RS 660 even more powerful than the Honda CBR650R, which is an inline-4. Read about it here.

You could think that the 2021 Tuono 660 is basically an RS sans the fairing, but there’s more to the Tuono than meets the eye. The engineers at Aprilia have tweaked the frame, subframe, and rider touchpoints to make the Tuono more adept at street-riding. No clip-on bars here, obviously, but thanks to the changes to the subframe, you sit a bit higher with a more upright riding stance.

As for the engine, it uses the same RSV4-derived 660cc parallel-twin motor that makes 6PS less than the RS 660. However, the Tuono’s 95PS peak power rating is still significantly higher than that of the Triumph Trident 660 and even the Kawasaki Z650. Mode details here.

The new design language has been adopted on Aprilia’s flagships models as well. In a bid to comply with strict emission norms, Aprilia has added a few more cubic inches to the engine. The result is 1,099cc as opposed to the previous 1,077cc motor. This allows the motor to put out 217PS at 13,000rpm and 125Nm at 10,500rpm -- 3Nm more than the previous model.

The bike’s electronics have been substantially reworked as well. So, you have a six-axis IMU and an 11MP Marelli ECU. The bike gets three riding modes for the track (two of which are fully customisable) and three modes for the road (one is fully customisable). It also gets multi-level engine brake control, launch control, cruise control, traction control, speed-limiter, ABS, and wheelie control. Click here for more details.

The Tuono V4 takes its design cues from the smaller Tuono 660. The outcome is a sleeker-looking Tuono with a new fairing and in-built winglets for better aerodynamics. The age-old halogen headlights make way for sleeker LED units, and this reduces the mass of the bike up front.

The Tuono's 1,077cc V4 engine remains largely unchanged except that it now complies with Euro 5/BS6 emission regulations. And despite all of that, the bike still puts out the same 175PS at 11350rpm and 121Nm at 9000rpm.

The only change, so to speak, is the new Magneti Marelli 11MP ECU and the lighter exhaust that claim to deliver better power throughout the rev range. Its 6-speed transmission gets a bi-directional quickshifter. It competes agaisnt the Ducati Streetfighter V4 and the Triumph Speed Triple 1200 in India. More about the 2021 Tuono here.

The mid-capacity ADV is also available on sale in India for those enthusiasts willing to go off the beaten path and into unknown territories. It’s powered by a 853cc Transversal 90° V-twin that makes 76PS at 7500rpm and 82Nm at 5000rpm. In typical ADV fashion, the V85 TT comes equipped with long-travel suspension, spoked wheels with dual-purpose tyres, a tall windscreen, and provisions to mount panniers.

The bikes have already started arriving at dealerships across India, so you can go ahead and book one for yourself. All five bikes seem quite intriguing on paper. But do they really justify their high asking price? Let us know in the comments below.