Aprilia May Launch The RS 660 In India Next Week

A picture of the Aprilia RS 660 with CEO and MD, Diego Graffi on board was released via his personal social media handle 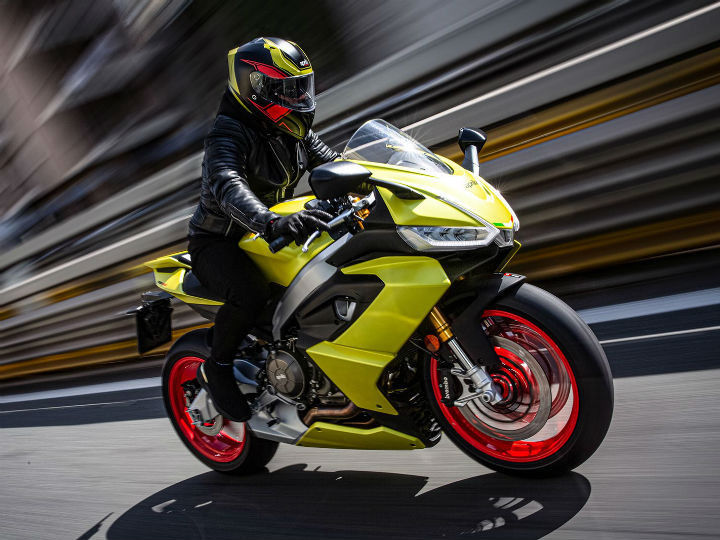 Aprilia’s known for its performance motorcycles, despite starting its journey in India with scooters. But all that’s about to change. The Italian two-wheeler manufacturer has been mulling over the thought of entering the Indian market for the past five years. And it’s finally being realised with the first batch of the Aprilia RS 660's arriving at the manufacturers Baramati plant.

We think the bike could be launched alongside the 75th edition Vespa, slated to be unveiled on 19 August, by none other than Diego Graffi, CEO and MD of Piaggio vehicles.

The fact that the India price for the RS 660 has leaked online cements this speculation. You can read about it here. It will be imported via the CBU route with three possible colour options: Lava Red, Black Apex, and Acid Gold.

Powering the bike is a pretty explosive 660cc parallel-twin motor churning out 101PS and 67Nm. This makes the RS 660 even more powerful than the Honda CBR650R, despite having two cylinders less.

It also gets a comprehensive suite of electronic nannies in the form of an APRC (Aprilia Performance Ride Control) package. This includes traction control, wheelie control, engine brake control, cruise control and five power maps, all of which are assisted by a 6-axis IMU. Aprilia has even thrown in a quickshifter, and all these aids are controlled via a fully digital colour TFT display.

On the hardware side of things you have a 41-mm Kayaba USD fork and a monoshock, both of which get preload and rebound adjustability. Anchoring the RS are twin 320mm discs up front mated to radially mounted Brembo calipers and a single 220mm disc at the rear.

While the Aprilia RS 660 doesn’t have any direct competition,  it will face some heat from the Honda CBR650R which, at 92PS, is well equipped to take on the Aprilia. Besides, you can also get the Triumph Street Triple RS, which puts out a lot more power, at about the same price. Ultimately, though, the question of whether the Italian’s  worth the premium it demands, can only be answered once we’ve had a chance to ride it.