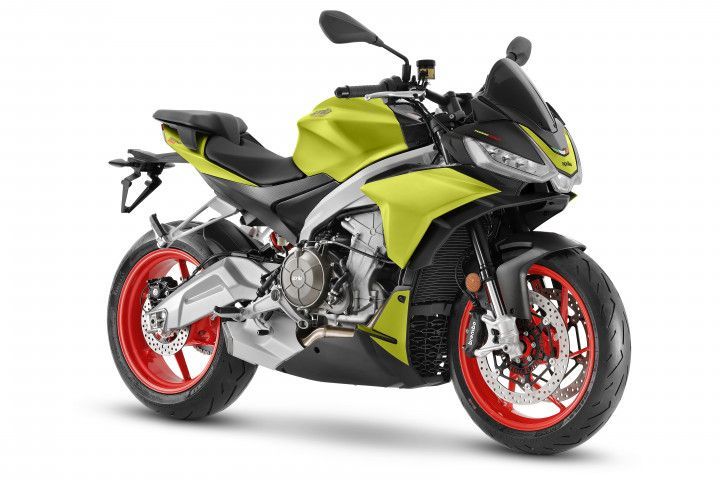 In the world of litre-class nakeds, there aren’t many bikes that can hold a candle to the Aprilia Tuono 1100. It might not be the most powerful bike out there but it surely is one of the most exciting bikes to ride in its segment. As thrilling as it is, the Tuono 1100 requires an experienced hand. Thus, Aprilia went about making a similar motorcycle for riders graduating into the big bike world. The end result: the Tuono 660.

It could be said the Tuono 660 is merely a RS 660 sans fairing, but that would be a bit harsh. While the majority of the elements are shared between the two mid-displacement motorcycles, the engineers at Noale have made sure the bikes stay true to their Tuono and RS identities. Thus, the tweaks to the frame, subframe, and rider touchpoints make the Tuono more adept to street riding.

The new three-LED insect face has been lifted off the RS 660, with a short cowl surrounding the lights. Much like the Tuono 1100, this small Tuono too gets a half fairing with a belly pan. The bike has undergone rigorous wind tunnel testing to make it as aerodynamically efficient as possible.

No clip-on bars here, obviously, but thanks to the changes to the subframe, the rider sits a bit higher, lending a more upright riding stance. It gets the same colour TFT dash displaying various electronic aids and ride-related data.

The RSV4-derived 660cc parallel-twin engine makes 6PS less on the Tuono than the RS 660. Still, when compared to its competition, the Tuono’s 95PS peak power rating is significantly higher than that of the Triumph Trident 660 or even the Kawasaki Z650. Aprilia engineers have also given the Tuono a shorter final drive for better acceleration and responsiveness, which should translate into a wheelie-happy motorcycle.

The Tuono 660 gets an exhaustive set of electronic rider aids. There‘s multi-level traction control, anti-wheelie control, cruise control, engine brake, and selectable engine maps. To make it slightly simple, Aprilia has five predetermined riding modes: three for the road and two for track. Each one of these modes gets its own dedicated ABS intervention setting as well.

Piaggio India top boss Diego Graffi has confirmed that both the RS 660 and Tuono 660 will arrive in India by July this year. Since there are no current plans to assemble the bikes in India, the pricing of these mid-displacement motorcycles is going to be quite high. We expect the Tuono 660 to be priced at around Rs 12 lakh while the RS 660 might be a lakh dearer.

These are steep prices when you consider the Kawasaki Z650’s Rs 6.04 lakh pricing and Triumph Trident’s expected sticker price of around Rs 7.10 lakh. While the RS 660 wouldn’t have any direct rivals, the Tuono 660 will compete with the likes of the Triumph Street Triple R, BMW F 900 R and the Kawasaki Z900, all three being cheaper than the Tuono’s expected price. Will its brilliant handling, vast electronics suite, and accessible performance be enough to sway customers its way? July 2021 couldn’t come much sooner.