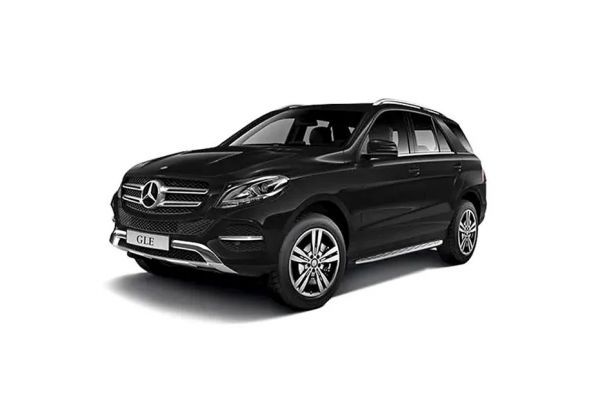 Mercedes Benz GLE retails in India in the price range of Rs 64.06 - 89.65 lakh (ex- showroom, Delhi). Upfront, the design theme of GLE is dominated by a large, dominating blacked out grill housing single slat with three-pointed star in the middle. The detailing is Crisp on the profile and the Coupe-like roofline really steals the show over the competitors. The rear of the car is equally muscular and sure to leave a lasting impression on you. The interior highlights include multifunction steering wheel, large touchscreen infotainment system, and spacious and comfortable seats. Under the Hood, the GLE comes powered by a set of two diesel engines - a 2.2-liter and a 3.0-liter and a 3.0-liter petrol engine, all mated to automatic transmissions for smooth and seamless gear shifts. In the Indian market, the Mercedes Benz GLE is competing against the likes of BMW X5, Audi Q7, and Jaguar F-pace among others.
Read More

The new Mercedes-Benz GLE is a facelift of the ML-Class and carries the new Mercedes nomenclature that the entire range of SUVs has received. The GLE takes the fight to the BMW X5, Volvo XC90 and the upcoming new Audi Q7. The SUV will be available with only with diesel engine options and will be assembled in India at the Mercedes facility in Chakan.

On the exterior front, the GLE features a new set of headlamps and a larger more angular grille than before. It now looks much like the new C- and S-Class when viewed up front. The grille with its twin slat design and centrally mounted three-pointed-star though still is reminiscent of the older ML’s striking design elements. The trademark angular C-pillar and large tail lamps still remain although the tail lamps have been reworked to make them look more modern and up to date. The GLE also gets LED headlamps for the first time further improving its appeal.

The interior gets updated too with an even larger screen than before which is without a doubt the centre of attraction. The air vents too have been encased with a classy silver surround, which in turn is set into the gloss black dashboard itself. The levels of quality and luxury in the interior have improved to a large extent.

On the mechanical front, the GLE in India will be available with a choice of two diesel engines : the GLE 250d and the GLE 350d. The GLE 250d gets an output of 204Ps of peak power and 500Nm of torque while the GLE 350d makes 258PS of peak power and 620Nm of peak torque. Also new is the 9-speed automatic replacing the seven speeder, that promises to increase efficiency and response. All variants of the GLE come with the 4Matic all-wheel drive system.

Has Mercedes-Benz ventured into uncharted territory with the GLE450 AMG coupe? And does it deserve an AMG sport badge? We find out if the new coupe SUV from the German automaker is worth your money!

With an impressive nine-speed automatic and a new badge at the back, this Mercedes middleweight tries to find its place in the luxury SUV space