Ask your question from XUV500 owners and experts
Your Question should contain at least 5 characters Submit Cancel
Available EMI Options
Rs. 32,521 per month @ 10.5% Apply for Loan

With the recent unveiling of the upcoming Mahindra XUV700 brand name for the upcoming W601 SUV, the existing XUV500 will be discontinued. That said, the XUV500 nameplate will return in the next-gen model which is expected to launch a year after the XUV700’s debut. It will rekindle its rivalry with the Creta, Seltos and Harrier. The upcoming model is likely to utilise the same 2.2-litre diesel and 2.0-litre petrol engine as now, albeit with less power than the XUV700. It’s likely to be offered with a front wheel drivetrain only.

The upcoming XUV500 could be priced from Rs 12 lakh (ex-showroom) and will renew its rivalry with the Tata Harrier, Hyundai Creta, Kia Setlos, Volkswagen Taigun, and the Skoda Kushaq.

The XUV500 is exclusively available with a 2.2-litre mHawk diesel engine which produces 155PS of power and 360Nm of torque. It is paired with a 6-speed manual transmission. The XUV500 is no longer available with an all-wheel-drive system. The SUV has an integrated starter-generator which features brake regeneration and idle start-stop tech. The Mahindra XUV500 has an ARAI-claimed fuel economy of 15kmpl. The 2.2-litre petrol engine has not been revised in any way and still develops 140PS of maximum power and 320Nm of peak torque. The petrol motor is available with a 6-speed automatic transmission only.

Mahindra currently offers the XUV500 in three trims: W7, W9, and W11 (O). All three variants are provided with manual and automatic transmissions. The base-spec variant, W5, has been put on hold indefinitely.

The XUV500 competes with mid-sizers like the Hyundai Creta, Kia Seltos, and MG Hector. Its three-row rivals are the Tata Safari and Toyota Innova Crysta.

A few years ago, at a point when no one would have believed that an ingenious SUV made in India and positioned at a premium spot above the Mahindra Scorpio, would manage to do so well in terms of sales. Mahindra went ahead and proved everyone wrong with the XUV500 and in just 33 months of its inception, the SUV sold one lakh units. Impressive!

To keep up with changing times, the Cheeta inspired SUV has evolved and looks more attractive than before. Being the first major makeover since its launch in September 2011, Mahindra is betting big on the 2015 Mahindra XUV500, but then the changes are more cosmetic than mechanical. 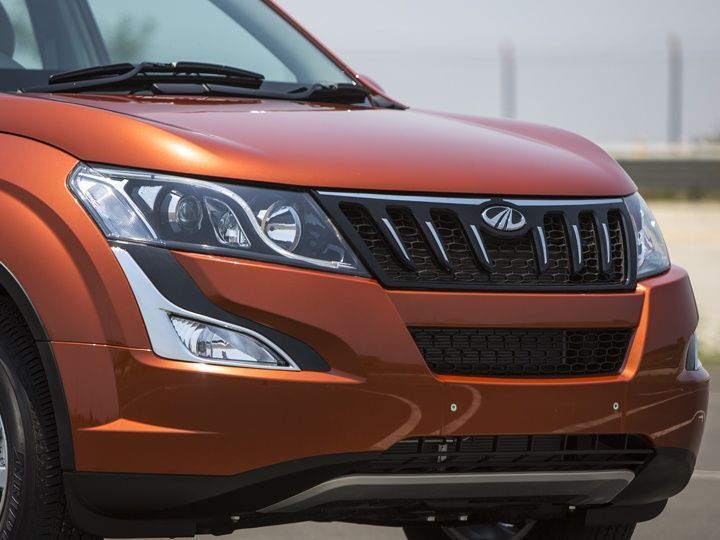 Like in most facelifts, the 2015 Mahindra XUV500 retains its original silhouette which most Mahindra loyalists will be glad about. The major exterior changes are done to enhance its face. Replacing the old body coloured grille is a new black one with chrome inserts, similar to the New Scorpio. And though the headlight shape is unchanged, it gets a re-profiled cluster with a distinct S-shaped LED guide light which imitates day time running lights. But the big change here is the inclusion of cornering light which ensures there’s no surprise around a corner.

Also new is a bolder bonnet with rounded corners and fewer creases, and a muscular new front bumper. Replacing the old round shaped fog lamps are these new L-shaped ones, which have been positioned higher than before. There’s plenty of chrome too, like around the fog lamps and on the new skid plate at the bottom of the front bumper. 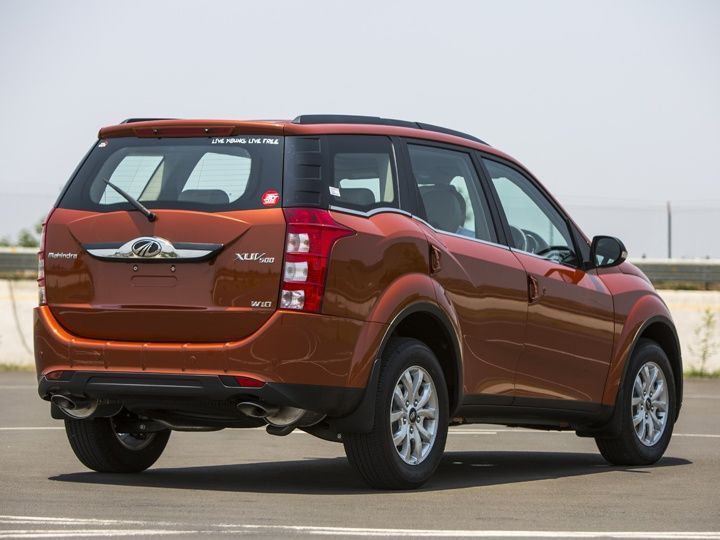 Look at the 2015 Mahindra XUV500 facelift from the side and you’ll notice a chrome strip highlighting the SUV’s entire shoulder line. Also new are fresh alloy wheels to complete the sporty theme. The only change at the back is a bolder chrome garnish on the registration plate, which completes the exterior design update.

Mahindra has also introduced two new body colours for the 2015 XUV500, Sunset Orange (which our test car sports) and Pearl White, apart from the usual five other shade offered before. The design has evolved with time and the changing demands of the customers, and overall it’s not over-the-top and nor does it try too hard to look fresh. 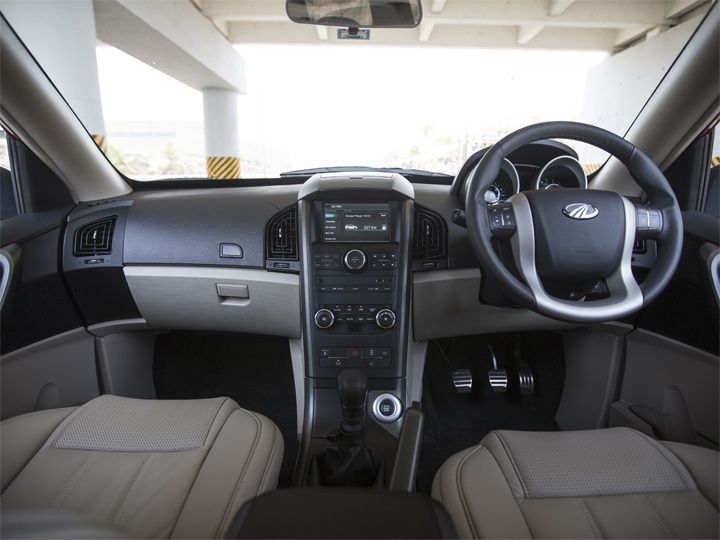 Interior: rating_3.5_rating
I wasn’t fond of the outgoing SUV’s black-and-purple or the walnut-and-beige interior. Thankfully they have been dumped to make way for a classier black-and-beige combination, which makes the cabin appear more airy than before. There clearly is better use of materials and the overall finish has improved too.

The basic layout is the same, but there are a few cosmetic tweaks, like the silver accents on the centre console have been replaced with better looking matt grey ones with metallic finish. The gear knob gets the same matt grey treatment, which gives the cabin a slightly more premium feel. 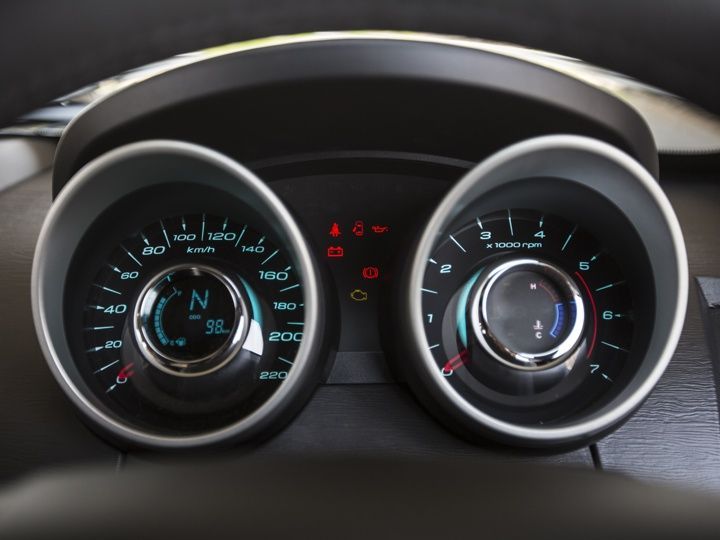 Another good change is the use of icy blue backlit colour instead of the previous red, making it easier on the eye. So the twin-cluster driver’s display gets backlight with the new icy blue lighting and which gives it an ambience or lounge lighting on the ceiling of the same colour.

The last two additions in the cabin are illuminated scuff plates on the door sill with XUV500 branding and sporty aluminium pedals. Besides these, the cabin is pretty much the same. The seats are large and comfortable, and the top-end variants get better beige leather upholstery. The second row of seat offers enough knee room, and even the third row is quite useable. 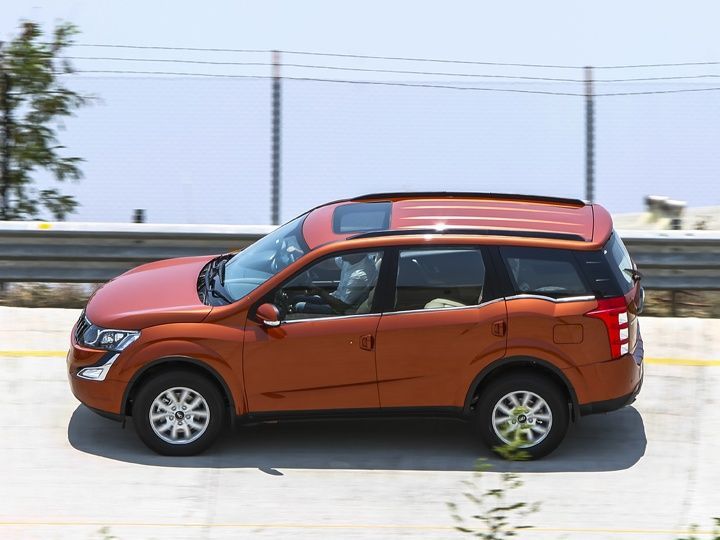 For an SUV priced between Rs 11-14 lakh, the last generation XUV500 came with plenty of kit. Mahindra has gone and bettered that with the 2015 XUV500 facelift and also introduced an all-new W10 top of the line variant.

Obviously, we got to drive the top spec version which came with features like an electric sunroof with anti pinch, and a 6-way adjustable driver’s seat. 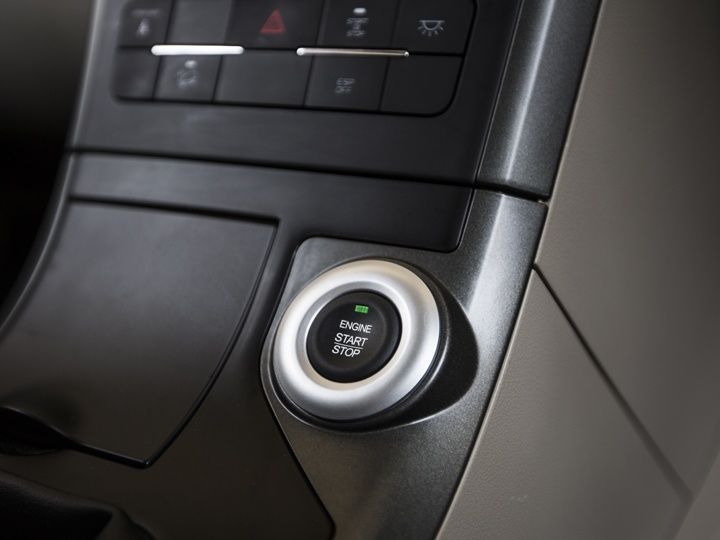 Now you also get key-less entry, push button start and a much needed (for a car of this size) rear camera with guide lines to assist while parking. There’s a new 7-inch touch screen replacing the older 6.2-inch display, along with an updated infotainment loaded with 3D maps, Mahindra’s Blue Sense app and improved UI. The W10 version is also equipped with logo projection on the OVRM, just in case you misplace the 2510kg SUV. For its price and size, the new Mahindra XUV500 facelift has plenty to offer. 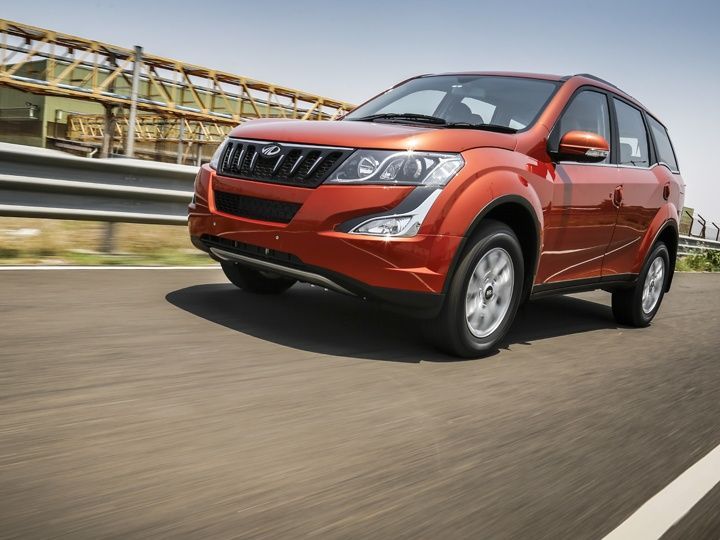 The powertrain on the 2015 Mahindra XUV500 remains unchanged. The 4-cylinder 2.2-litre m-Hawk diesel motor continues to churn out a healthy 141PS of power and 330Nm of torque and comes mated to the same 6-speed gearbox. Though Mahindra hasn’t mentioned it, but the throws of the gearbox feel crisper now.

But what the company did say is that it has been tweaked to improve final drive ratio. This calibration not only enhances performance but fuel economy too. The strong power-to-weight ratio makes the new XUV500 unlike most bulky SUVs and more premium saloon-like to drive. It’s neither lethargic nor does it have the usual diesel clatter, even when maintaining three digit speeds. 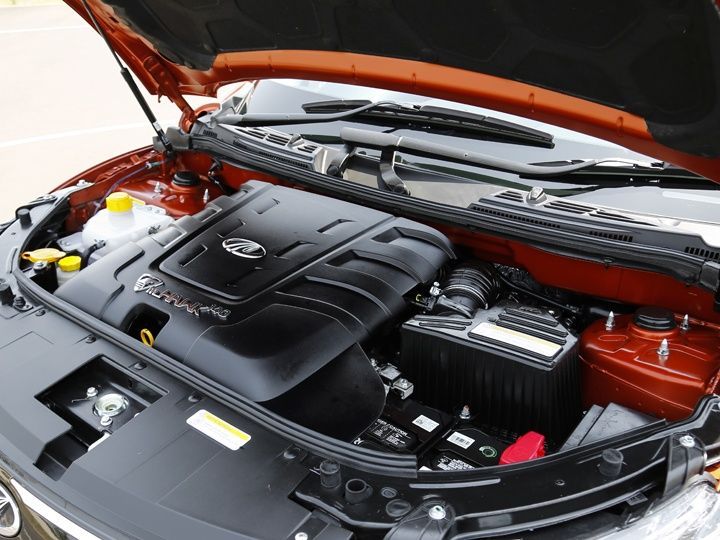 There was hardly any lag to overcome and response to my right foot was prompt. The engine felt more eager, as the hefty torque kicks in as early as 1,600rpm offering strong low and mid-range making the SUV quick off its feet. It won’t be breaking any speed records but is fast enough to keep things interesting. 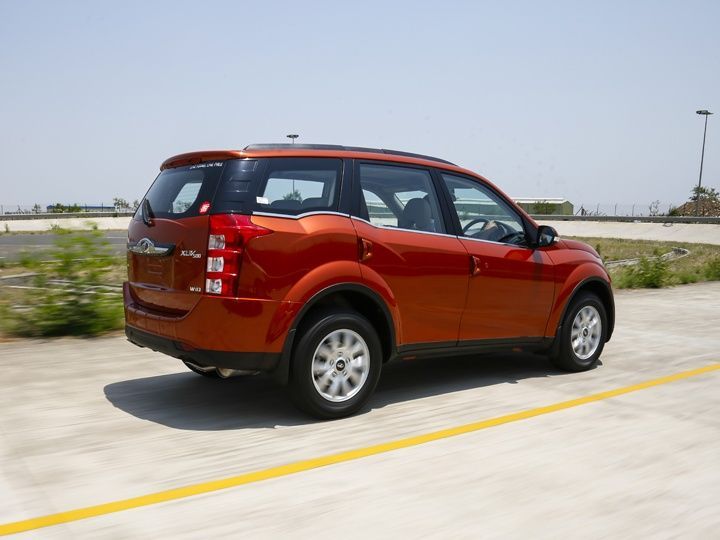 Being a monocoque is another reason why the XUV500 does not wallow like usual SUVs. Now being sprung on new springs and tweaked shock absorbers the ride and handling is said to have also gone up a notch. Since the test ride was restricted to Mahindra’s test track in Chakan we could not test the XUV500’s handling dynamic to the limit, but it seems fairly firm and flat through the corners of the track.

The suspension felt slightly firmer than the older model, and we expect it to have less body-roll than before, but we’ll need to drive it on our usual roads to confirm that. The steering had the right weight but could have been more direct. 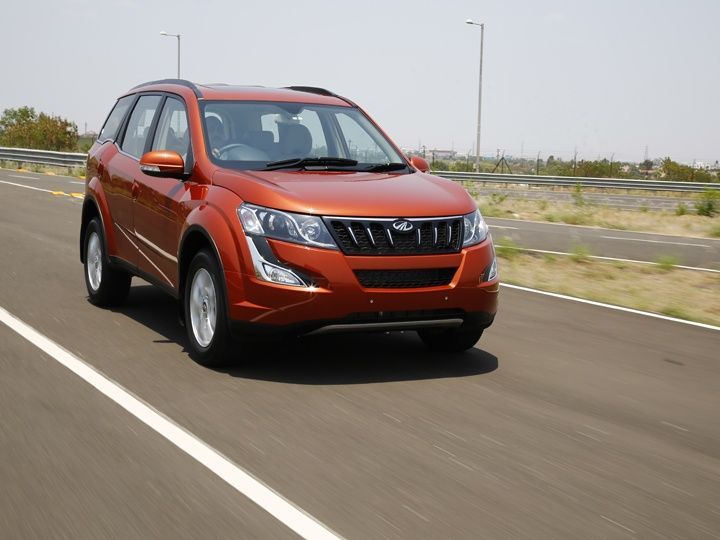 The 2015 Mahindra XUV500 comes equipped with the latest generation ESP from Bosch (ESP 9) which offers better control under severe braking condition. This along with disc brakes on all four wheels gives the two and a half tonne SUV the desired stopping power.

While the new Brake Energy Regenerator improves fuel economy and also lowers CO2 emissions. Mahindra boasts of improving the fuel economy from 15.1kmpl to an ARAI certified 16kmpl. But with the summer sun in all its glory, the air-conditioning on and after some enthusiastic runs, the XUV500 onboard computer didn’t cross the 10kmpl mark. 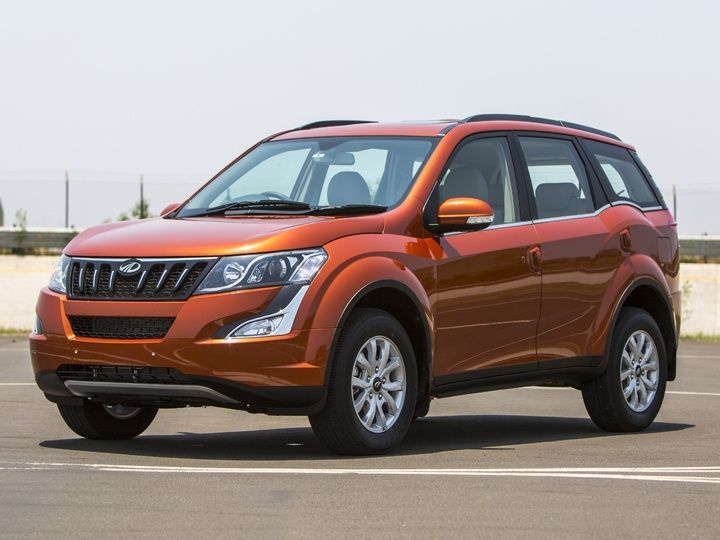 Now there are fewer reasons not to buy the 2015 Mahindra XUV500. It has improved in terms of styling, interior quality, features and fuel economy. Moreover the XUV500 has an attractive price starting from Rs 11.21 lakh for the base two-wheel drive W4 variant, while the new top-of-the-line W10 all-wheel drive comes at a tempting price of 15.99 lakh (ex-showroom Delhi).

What is the price of Mahindra XUV500 Top Variant?

What is the mileage of Mahindra XUV500?

What is the EMI of Mahindra XUV500 in Delhi?

What are the top competitors of Mahindra XUV500?

What is the ground clearance of Mahindra XUV500?

The ground clearance of Mahindra XUV500 is 200 mm.

What are the best financing options for Mahindra XUV500?

Save Big on Used XUV500
View all Used Mahindra XUV500