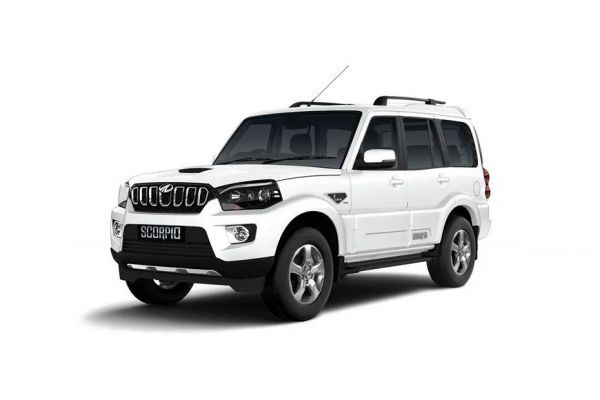 Mahindra Scorpio is a 7 seater SUV car launched at a base price of Rs. 10.20 lakh in November 2017 by Mahindra in India. Scorpio is available in diesel engine only . Scorpio diesel is powered by 2523cc and 2179cc engine claiming mileage of 16.36kmpl. Mahindra Scorpio has a wheel size of 17 inch and ground clearance of 180mm. It is available in 6 variants and 4 colours.

The BS6-compliant Mahindra Scorpio has been spotted testing in India. The current Scorpio could get a BS6 upgrade before its successor arrives in the country. It could be launched before the March 31 deadline.

The Mahindra Scorpio doesn’t have any direct rivals in India. In terms of pricing, the Scorpio’s rivals include the Hyundai Creta 2020, Kia Seltos and the MG Hector.

This is where Mahindra has played its Joker. In essence, the updated SUV can be had with two diesel engines - the 2.5-litre m2DICR and the 2.2-litre mHAWK. The former unit is reserved only for the entry-level variant and produces 75PS/200Nm. Yes, that’s not impressive at all. However, the smaller engine is available in two states of tune - 120PS/280Nm and 140PS/320Nm. The higher tune comes with a new 6-speed manual transmission, while other units continue to be offered with a 5-speed manual transmission. The micro hybrid technology and the low-range 4x4 system continue to be the Scorpio’s standout features. It still doesn’t get an automatic transmission. However, Mahindra is expected to equip the Scorpio with the torque converter from the XUV500. Mahindra hasn’t officially revealed the mileage figures of the updated Scorpio. Are they worse than before? Well, only a comprehensive road test can answer that question.

This time around, Mahindra has simplified the variant list. Only six remain now - S3, S5, S7, S7 (140PS), S11, S11 4x4. Don’t ask us what happened to the S9. Probably the fear of a smaller suffix after the ‘S’ would have created the wrong impression with those who knew that its predecessor had an S10 variant. The S3 is the only variant that comes with m2DICR engine and should be ignored. Less than a hundred horses to power a 2.5-tonne SUV is just cruel. Moreover, with its black bumpers, black cladding and exposed steel wheels, it screams out that you are a cheapskate. The 120PS/280Nm mHAWK powerplant is available in the S5 and the S7 variants. However, the latter is also available with the 140PS/320Nm tune. It goes without saying that the range-topper, the S11, comes with the most powerful engine.

Going by the looks of the refreshed Scorpio, it seems like Mahindra hasn’t put enough effort into giving it a fresher fascia. Sure, there are a few cosmetic updates but one really needs to be a car geek to spot them. The seven-slot front grille seems like it has been taken off of a Jeep Compass! The redesigned front bumper houses bigger fog lamps with chrome surrounds and is accompanied by a redesigned skid plate too. On the side, the ORVMs get integrated turn indicators and the refreshed Scorpio also gets newly designed 17-inch alloy wheels. The design of the air extractors for third row windows have been tweaked as well. The plastic cladding around the rear number plate has been ditched and the tail lamps now get a red-lens treatment. All in all, we won’t blame you for mistaking the updated Scorpio for its predecessor.

The Scorpio’s interior was never high on practicality or quality. With the facelift, Mahindra has tried to add a dash of both. The seven-seater’s all-fabric upholstery has been replaced by faux-leather for the seats, steering wheel and the gear lever. The darker dual-tone theme, however, seems a bit dull. On the practicality front, Mahindra has bolted a sunglasses holder on the roof and added bigger cubbyholes for your knick-knacks, including a holder for your smartphone. The feature-list has been updated with a reverse camera (featuring dynamic assist), one-touch lane change indicators and auto window roll-up. Basic safety features like ABS and dual airbags are still missing in the base variant, which is a bit of a letdown when you consider its price.

Tata Safari Storme : Tata’s smug mobile has started to feel dated. But there is no getting away from the fact that it is still just as imposing and just as capable off-road as ever. The 4x4 variant is slightly more affordable than the Scorpio’s. That said, the Scorpio is a more rounded product.

Honda BR-V: Honda's offering in the segment is essentially a jacked up Mobilio with some mechanical changes to compensate for the raised stance. It is the only crossover here which can seat seven people.

Nissan Terrano : : The Duster's better-looking cousin (yes, looks are subjective), the Terrano suffers from being too overpriced for its own good. It does get a diesel AMT variant, which is a good option for those looking for a convenient urban SUV.

Renault Duster : The car that started it all, the Renault Duster is the only modern crossover in the segment to feature an AWD system. Its butch design, adequate space, CVT transmission (petrol), AMT (diesel) and all-weather ability make it score a lot of brownie points in the segment. However, its interior quality and limited service network make it less appealing.