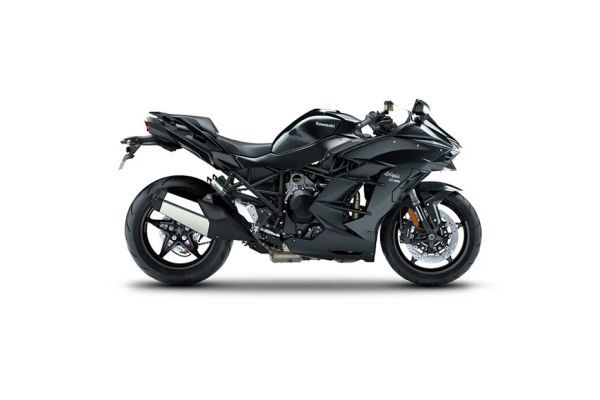 Kawasaki launched the H2 SX sports tourer along with the higher specced H2 SX SE at the Auto Expo 2018. They are priced at Rs 21.80 lakh and Rs 26.8 lakh (ex-showroom) respectively. Both bikes will come to our shores via the CBU route.

Designwise, the H2 SX looks similar to the H2 but has got some changes that sets them apart. The H2 SX gets a large engine covering, bigger fuel tank and a windscreen which is more upright for better air deflection. The rear has also been redesigned to enhance pillion comfort and to make room for panniers.

The H2 SX is powered by a supercharged, inline four-cylinder engine that generates 200PS of power at 11,000rpm. Kawasaki claims that the engine has been tuned to offer smooth power delivery and better low to mid range tractability.

The Kawasaki H2 SX doesn’t really have a rival in the sports tourer segment. However, if you look elsewhere, the closest competition for the Kawasaki would be the Honda Goldwing and the BMW K1600B.

Powering the Ninja H2 SX is the same supercharged engine that is found on the Kawasaki Ninja H2. This 998cc, liquid-cooled, inline-four, supercharged engine produces 200PS of power at 11000rpm and 137.3Nm of torque at 9500rpm. However, unlike the H2, the motor here has been tuned to deliver power in a more linear manner for better low and mid-range performance. Kawasaki has equipped the HS SX with dual 320mm discs at the front and a single 250mm disc at the rear. Suspension duties are handled by 43mm USD forks at the front and a gas-charged shock at the back, both adjustable. The H2 SX tips the scale at 256kg (kerb).

Kawasaki’s first supercharged tourer borrows many design cues from its sibling, the Kawasaki Ninja H2. However, the Kawasaki Ninja H2 SX differentiates itself in terms of design by adding a full fairing that covers the engine, and a more conventional rear end for pillion passengers and pannier mounts. It is no chump when it comes to electronic wizardry either. It comes loaded with features like electronic cruise control, Kawasaki’s cornering management function, two-way quickshifter, engine braking control, launch control, traction control, lean-sensing cornering headlamps, two display modes and a TFT instrument cluster.

Honda Goldwing: The Honda Goldwing can be best described as an icon of hyper-functionality and luxury long distance touring. It might not be an outright competitor to go up against the supercharged sports tourer from Kawasaki but it has certainly cemented its position as a very capable modern day sports tourer.

Kawasaki Ninja H2 SX is going to launch in India with an estimated price of Rs. 22.89 Lakh