The KTM 200 Duke now comes with the safety net of single-channel ABS. Priced at Rs 1.6 lakh (ex-showroom, Delhi) it commands a premium of around Rs 8,200 over the standard variant. Apart from its performance, the styling of the 200 Duke played a vital part in the bike gaining prominence among Indian bikers. Unlike most bikes in the segment which ar e heavily loaded on the styling front for better on-road presence, the 200 Duke adopts a slim and minimalistic approach which helps it stand apart from its rivals. The sharp headlight, exposed trellis frame, angular tank and orange 17-inch wheels make the KTM 200 Duke a visually arresting motorcycle. Talking about features, the 200cc motorcycle features an all-digital instrument console, which displays details like speedometer, tachometer, fuel gauge, real-time mileage, average fuel consumption, average speed and more. The KTM 200 Duke is available in three colour options - white, orange and black. 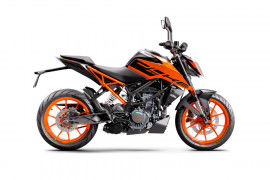