All The Juicy Details About The Kawasaki Z H2 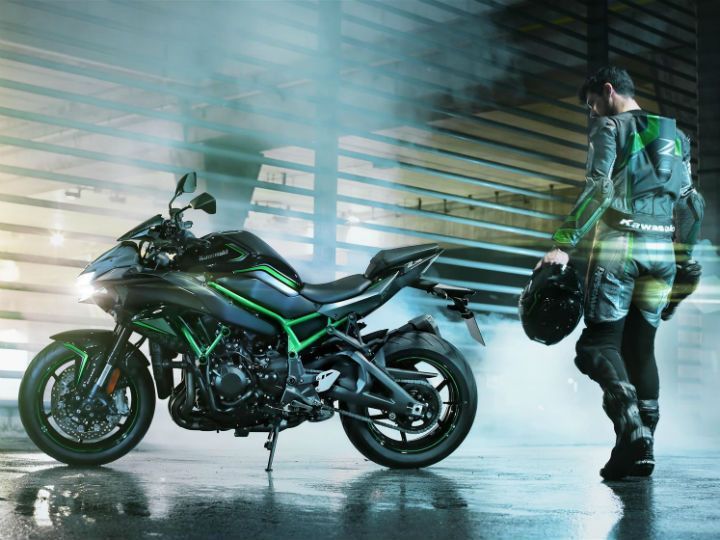 At this year’s Tokyo Motor Show, one of the most awaited motorcycles apart from the Ninja ZX-25R was the Z H2. This supercharged supernaked stood as a beacon of hope and a symbol of rebellion amidst boring electric scooters from the other Japanese brands. Even among the geeks, this motorcycle is really interesting because of the amount of technology Kawasaki has implemented in this mad machine. As an enthusiast, here’s everything you need to know about the motorcycle:

Kawasaki hasn’t revealed the price yet, but considering the Ninja H2 starts from GBP 26,499 (around Rs 24.16 lakh), expect the supernaked to cost around Rs 22 lakh. The motorcycle is likely to be Euro 5 compliant, which is equivalent to the upcoming BS6 norms. So, expect the bike to be launched either by early- or mid-2020. It will enter our country via the CBU route from Japan, and Kawasaki is likely to price the bike at around Rs 30 lakh to Rs 33 lakh considering the H2’s pricing of Rs 34.99 lakh (ex-showroom India).

Kawasaki is a huge conglomerate with a presence in heavy machinery, marine and even aerospace manufacturing. So, to make the supercharger for the engine, Kawasaki got help from the Gas Turbine & Machinery Company, Aerospace Company and Corporate Technology Division. The supercharger has been developed completely in house and the bike maker claims it is so efficient— across a wide range of pressure ratios and flow rates (read engine rpm and motorcycle speed)—that an intercooler has been deemed unnecessary! The absence of an intercooler means a more compact engine design and more importantly, lighter weight.

In the Z H2, the engine has been tuned to be more rider-friendly and despite that, it produces a dizzying 200PS of power at 11,000rpm and an equally impressive 137Nm of torque at 8500rpm. In comparison, the manic H2 produces 231PS and 141.7Nm. The engine works in conjunction with a 6-speed transmission with assist and slipper clutch and a standard bidirectional quickshifter.

Plus, there are two power modes on offer, which work alongside the traction control. For lazy cruising down the highway, it also gets electronic cruise control. Not that it matters, but Kawasaki has also equipped the bike with an economical riding indicator, which lights up when ridden with a sensitive wrist.

On the saner side of the electronics package, the bike gets smartphone compatibility, which pairs up with the TFT instrument cluster. This helps the rider to see call/mail notifications and fiddle around with the display settings.

The engine nestles inside a high-tensile steel trellis frame, which, in turn, is suspended on Showa SFF-BP (Separate Function front Fork - Big Piston) up front. It offers preload, rebound and damping adjustability, whereas the rear features a Showa monoshock, which is also likely to be fully adjustable.

Interestingly, despite the absence of a full fairing, this motorcycle tips the scales at 239kg kerb, which is 1kg more than the H2. Bringing all that mass to a halt are the dual 290mm discs with Brembo M4.32 4-piston radial monobloc calipers up front and a 250mm disc with a 2-piston caliper at the rear. The 17-inch alloys ride on grippy Pirelli Diablo Rosso III rubber measuring 120-section up front and 190-section at the rear.

All the motorcycles under the Z range are known for their Sugomi design philosophy. As usual, the bike is riddled with numerous sharp and angular lines. The most interesting aspect of the bike’s design is its asymmetric styling up front. The supercharger intake is only on the left side and Kawasaki has tempered the unique styling with a nice touch by adding green coloured mesh on the intake.

Also, in a first for the Z range, the Z H2 comes with a frame-mounted headlight. Sure, the low-slung headlight looks aggressive, but it just feels a little too bloated and its design doesn’t feel as coherent as the Z1000, in our opinion. While the rear comes with a stubby high-set tail section, the large exhaust canister plays spoilsport to an otherwise sporty design. As expected from a modern motorcycle, the lighting system is all LED. The bike gets a generous 19-litre fuel tank and the seat is 5mm taller than the H2, at 830mm.

All in all, the Z H2 may not be the most powerful naked out there, but it certainly stands apart with all its supercharged madness.