All that supercharged Kawasaki goodness, now available in naked form with the Z H2 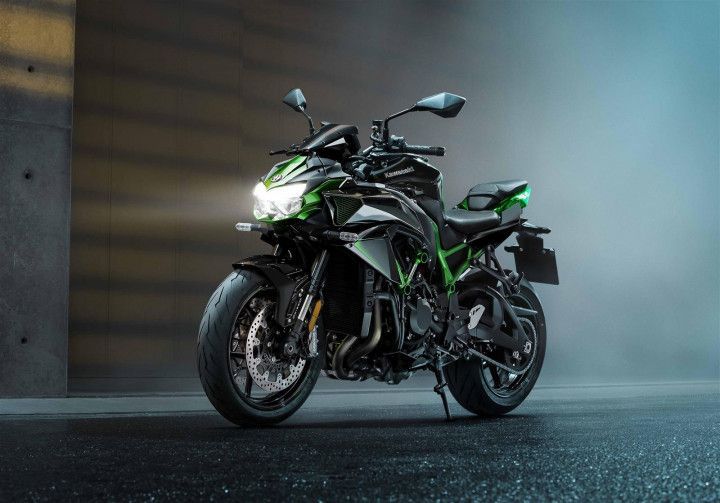 In the business of being absolutely bonkers, there’s not too many modern bikes that can hold a candle to Kawasaki’s ludicrous supercharged H2 range. That range has just grown in India, with the launch of the 2021 Z H2 - Team Green’s flagship naked streetfighter. Here are all the tasty details about the new bike:

The poor man’s Z H2 is the base variant, suspended on old-fashioned purely mechanical springers from Showa. There’s a separate function big piston fork up front assisted by a monoshock at the rear, and stopping power comes from Brembo M4.32 monoblock calipers.

If the best is a must for you, then the higher-spec SE variant should be your pick. The suspension is still from Showa, but there are no compromises here - this is the fully electronic Skyhook system; brakes are still Brembo monoblocks, but once again, these are the range-topping Stylema units. And yes, Mr. Wayne, it does come in black. Only in black, actually: both variants are available only in a single Metallic Diablo Black/Golden Blazed Green livery.

At the heart of this monster is that demonic 998cc liquid-cooled inline-four motor belting out 200PS and 137Nm. That’s way more torque than even a BMW M 1000 RR or Ducati Panigale V4. In fact, until the Ducati Streetfighter V4 arrives on the scene later this year, the Z H2 will remain the most powerful naked bike on sale in India.

Also Read: Tear Through The Speed Of Light With Kawasaki's 2021 Z H2

To help ensure that you don’t wrap your bike around a tree with all that firepower, Kawasaki has been kind enough to throw in a whole suite of IMU-assisted electronic rider aids. This includes three ride modes (Sport,Road,Rain), power modes (Full/Middle/Low), traction control, cornering ABS, launch control, cruise control and a bi-directional quickshifter, all assisted by a Bosch 6-axis IMU and controlled via a 4.3” full-colour TFT display with smartphone connectivity.

We have accused Kawasaki of styling its bikes a little too similarly in recent times, and while the Z H2 does feature the same Sugomi design language as the rest of the ‘Z’ lineup, it still has a very distinct and unique appearance. Mostly because of its bulk. That radiator looks like it could double up as a picnic table, and the engine seems like it’s been shoehorned into the bike using nothing but sheer bloody-mindedness. Kawasaki has also taken a leaf out of BMW’s playbook and given the Z H2 an asymmetric look, thanks to a ginormous ram air intake present only on the left side of the bike.

Cough Up The Cash

The term ‘entry-level’ probably doesn’t translate very well into Japanese, because the “base spec” Z H2 will still set you back by an eye-watering Rs 21.9 lakh. How much for the SE? Well, if you have to ask….. It’s Rs 25.90 lakh. And you can forget about test rides. These bikes will be made-to-order only once you complete a full payment up front.