The Kawasaki Z H2 Is Guaranteed To Blow You Away

This supercharged monster puts out 200PS! 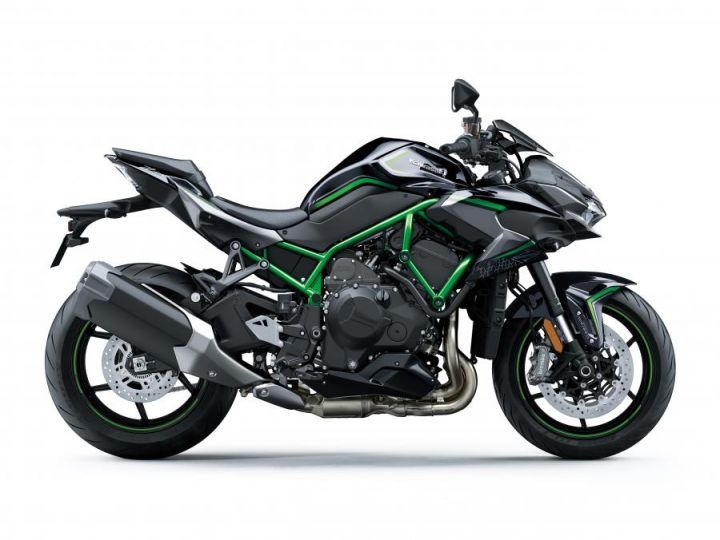 After all the teasing and spy shots, we’ve finally been able to lay our eyes on the Kawasaki Z H2 at the Tokyo Motor Show. The latest in Kawasaki’s line of ludicrous supercharged motorcycles, this one is a naked streetfighter putting out 200PS and 137Nm! While it does come close, this still isn’t enough to make it the most powerful production naked motorcycle in the world. That honour still lies with the MV Agusta Brutale 1000 Serie Oro which packs a 211PS motor. However, another Italian manufacturer might have something to say about that, as we shall find out later today.

Coming back to the Z H2, we see the 998cc supercharged engine nestled in a green trellis frame that has become a signature mark of the H2 range. Interestingly, despite being based on the fully-faired Ninja H2, the Z H2 is actually 1kg heavier, with a kerb weight of 239kg.

The intake for the supercharger is present only on the left side of the motorcycle, giving the Z H2 an asymmetric design. Flat handlebars, a low-mounted and mean looking LED headlight, a meaty fuel tank and the exposed trellis frame sections make this a handsome looking streetfighter. The bulk of the engine is apparent and the Z H2 has a muscular appearance overall, but the large exhaust system looks a little ungainly. Damn you, emission norms.

All this performance would be impossible to tame without electronic assistance, so Kawasaki has equipped the Z H2 with integrated riding modes. These combine with the KRTC traction control system and various power modes to help you not fling yourself over the bars every time you open the throttle. All these settings can be controlled via the fully-digital colour TFT LCD instrument cluster that also features Bluetooth connectivity.

The rest of Kawasaki’s supercharged range has made its way to India, including the bonkers 310PS track-only H2R. So we have our fingers crossed hoping that the green team treats us with the Z H2 as well.

Though a little smaller and not one bit less exciting than the Z H2, Kawasaki unveiled another very exciting motorcycle alongside the supercharged beast - the Ninja ZX-25R. This little bike is proof of how good things come in small packages, squeezing a 250cc in-line four-cylinder motor into a tiny entry-level sportbike form. While no figures have been revealed yet, rumours suggest that this motor could have some serious firepower, putting out close to 60PS. We’ll bring you more about this bike soon.