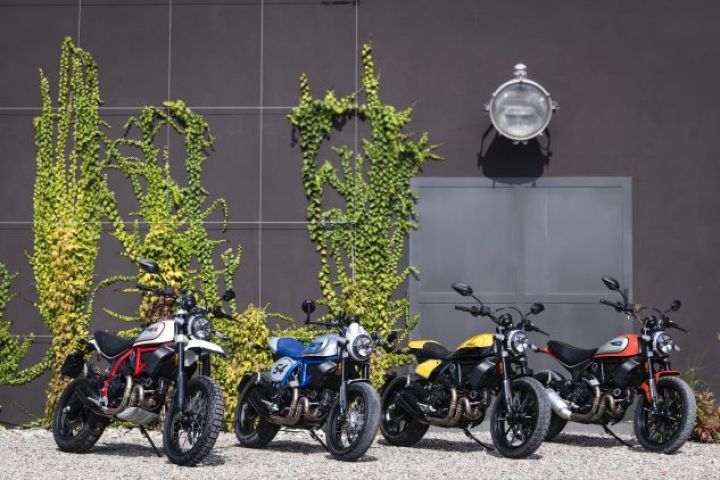 After unveiling the 2019 Scrambler Icon in September this year, Ducati has now showcased the updated versions of the Scrambler’s other variants - the Full Throttle, Cafe Racer and Desert Sled - at the ongoing Intermot exhibition in Cologne, Germany. Like the Icon, the 2019 versions of the new Scrambler variants get a host of new safety tech and mild cosmetic enhancements. All three bikes feature the new circular headlamp with X-shaped inset DRLs, larger aluminium tank panels, Bosch cornering ABS, a new multimedia system and a new instrument cluster menu that now displays fuel level. So let’s take a closer look at the three variants.

2019 Scrambler Full Throttle:
The new Scrambler Full Throttle gets its eye-catching livery from the flat track Scrambler ridden by Californian racer Frankie Garcia in the 2018 American Super Hooligan Championship. The bike also gets a new side panel, which is basically a number plate holder like the ones seen on competition bikes. It gets a flatter handlebar, a flat tracker seat with a rear seat cowl, painted tank side panels to match the livery and twin stacked exhaust end cans.

2019 Scrambler Cafe Racer:
For 2019, the Scrambler Cafe Racer gets a retro silver paint job with the frame painted in a contrasting sky blue shade. The fuel tank gets painted side panels. Other retro changes include new 17-inch spoked wheels fitted with stickier Pirelli Diablo Rosso III tyres. It gets a small bikini fairing and a rear seat cowl for that sporty look. The handlebars are aluminium clip-on units with bar-mounted mirrors, while the twin stacked exhaust cans get an aluminium cover.

2019 Scrambler Desert Sled:
Following its retro designed predecessor, the 2019 Desert Sled gets a red painted frame. It also swaps the gold spoked wheels of its predecessor for a more subtle black coloured unit. The white paint job adds contrasts while staying true to the 70s theme. The seat gets a new lining that puts seat height at 860mm for that tall riding stance, while the tyres are 19-inch front and 17-inch rear Pirelli Scorpion Rally STR on-off road units.

Ducati India is expected to launch the 2019 Scramber Icon by the end of this year or early next year. Expect the other variants to follow soon after.