On A Hunt For A Maxi-Scooter? Take A Look At This

Aprilia SXR 160 and the Suzuki Burgman Street compared in images 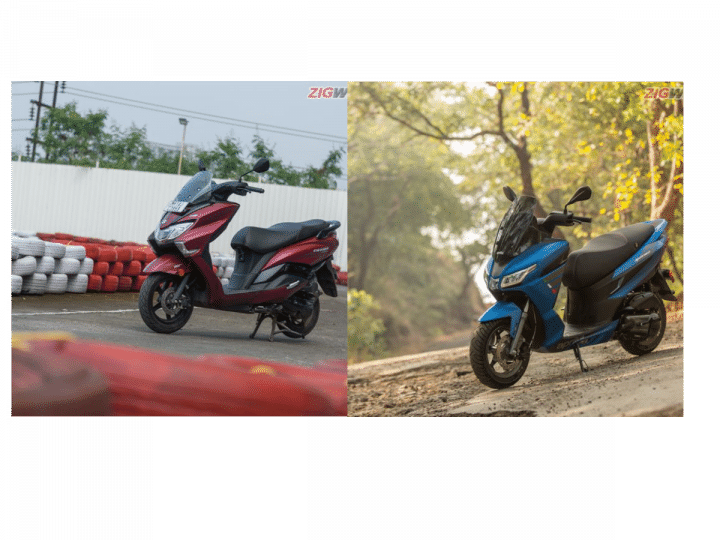 The Indian scooter segment now has two maxi-styled scooters on sale: Aprilia SXR 160 and Suzuki Burgman Street. Both the scooters have that maxi-appearance but possess a lot of contrasting attributes. Here’s how the two scooters compare in pictures:

While the Aprilia SXR 160 has sharp body lines, the Suzuki Burgman Street features more curvaceous lines. The rear-end of the SXR 160 appears smaller compared to the front-end whereas the punny 10-inch rear wheel makes the Burgman Street look disproportionate.

The Aprilia SXR 160 flaunts a three-piece LED headlight with DRLs which gives it a much more distinctive look than the Suzuki Burgman Street’s LED headlight.

Both the scooters have large aprons and tall windscreens, but the SXR 160’s smoked windscreen complements the overall look better than the clear windscreen does on the Burgman Street.

The SXR 160 gets a mode button to toggle through the data on the go while the Burgman Street gets the engine kill switch.

The suspension units on both scooters are similar with a telescopic fork at the front and monoshock at the rear. That being said, the suspension on the SXR 160 is stiffer than that on the Burgman Street.

Braking setup on the Aprilia SXR 160 comprises a front disc and a rear drum brake, similar to the Suzuki Burgman Street. However, the Aprilia scooter sports a single-channel ABS as standard.

On both the maxi-scooters, the rider and pillion have enough room to move on the seat. However, the Burgman Street has a more spacious underseat storage than the Aprilia SXR 160.

Last but not least, Aprilia has priced the SXR 160 at Rs 1.26 lakh whereas the Suzuki Burgman Street retails for Rs 82,956 (all prices, ex-showroom Pune).