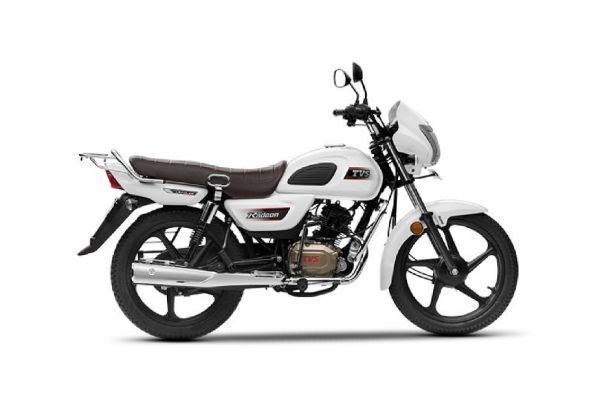 TVS Radeon is a commuter bike launched at a base price of Rs. 52,360 in August 2018 by TVS in India. Radeon is powered by 109cc engine claiming mileage of 69.3kmpl. Radeon has a 4 stroke duralife engine and a 4 speed gear box. TVS Radeon comes with drum breaks in front and rear. It is available in 6 variants and 7 colours.

The TVS Radeon BS6 price list has been revealed. It costs Rs 58,992 for the standard drum variant, Rs 61,992 for the Commuter Bike Of The Year drum brake version and Rs 64,992 for the disc brake-equipped special edition version. All prices are ex-showroom Delhi. The TVS Radeon BS6 is costlier than the TVS Radeon BS4 by around Rs 6,600 to Rs 8,600, depending on the variant. Expect TVS to launch the bike in a few weeks.

The TVS Radeon BS6 will feature a fuel-injected engine. It is expected to make slightly less power and/ or torque compared to the carburetted, BS4-compliant 109.7cc motor, which produces 8.4PS and 8.7Nm. It is expected to come with an all-LED headlamp and refreshed graphics.

Other aspects of the bike including a telescopic front fork, twin rear shock absorbers, 130mm front and 110mm rear drum are expected to remain untouched. The TVS Radeon BS6’s primary rival will be the Hero Splendor iSmart 110 BS6.

Design & Features: In a bid to refresh its ageing commuter portfolio, TVS launched the 110cc Radeon in India. The design is just like any other commuter (read Splendor), but the Radeon stands apart because of the LED DRLs placed below the headlamp, a plush seat and tank grips on the sides. It gets some premium touches too - the engine casing gets gold treatment, and the exhaust system is finished in chrome. TVS offers a USB port as an option, which is located just behind the headlight nacelle. The bike is available in four colours: white, beige, purple and black. Its black 18-inch alloy wheels are shod with Duragrip tubeless tyres for optimum grip on bad roads. Engine & Specifications: The Radeon gets the tried-and-tested 109.7cc Dura-Life engine from the Star City Plus, albeit it is tuned for better low-end torque, which would be ideal in city commutes. The motor produces 8.4PS at 7000rpm and 8.7Nm at 5000rpm while working in conjunction with a 4-speed transmission. TVS claims the engine returns a fuel efficiency of 69.3kmpl. This, coupled with a 10-litre fuel tank should easily result in over 500km of range. True to its positioning as a premium commuter for rural areas, it gets a ground clearance of 180mm. The tubular steel frame is suspended on telescopic front forks and twin rear shock absorbers with 5-step adjustability. Braking is managed by 130mm front and 110mm rear drum units, but it features Sync Braking Technology for newbies which comes in handy during emergency braking.

The 2018 Discover 110 has a relatively fresh styling in the segment, thanks to the inverted horn-shaped LED DRL. The design of the motorcycle is in line with the Discover lineup. It not only has a bigger 115.5cc motor, but churns out slightly more power and torque as well (8.6PS & 9.81Nm). It retails for Rs 51,674 (ex-showroom Delhi).

The 110cc iSmart variant of the Splendor has a more contemporary design. It also enjoys the benefit of iSmart technology, which switches off the engine when it idles for too long, thus conserving fuel. This commuter also makes slightly more power and torque than the TVS Radeon - 9.5PS and 9Nm respectively.

The TVS Radeon should be an ideal buy for customers looking for a no-nonsense, functional commuter that’s built to last. The large seat should make the motorcycle more comfortable on those traffic-laden urban streets as well as on pothole-ridden rural roads. Its competitive pricing should also appeal to price-conscious buyers who are looking for something new.