rvmp_similar_cars_slider,rvmp_launch_alert_popup,rvmp_qna,rvmp_forum_ask_car_owner,rvmp_model_wise_user_review,rvmp_model,rvmp_variant_widget
×
×
Listening... Didn't get that
To Search
Say a Car or a Bike Name 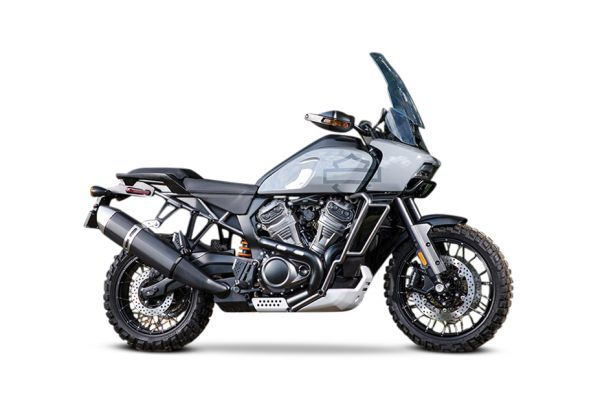 Harley-Davidson’s first adventure motorcycle, the Pan America, has been showcased at the 2019 EICMA. It is powered by an all-new Revolution Max 1250cc V-twin motor, which aims to produce over 147PS and 122Nm. The brand has teamed up with Brembo to make 4-piston monoblock calipers, and for tyres, it has collaborated with Michelin. The tubeless knobby tyres are shod on spoke wheels. The motorcycle is suspended on inverted fork and a rear monoshock. Harley says the bike is slated for a launch in the international markets in late-2020. So, expect the American bikemaker to launch the ADV in our shores in 2021. Once launched, it will compete against KTM 1290 Super Adventure R, BMW R 1250 GS Adventure, Triumph Tiger 1200 XCx and Ducati Multistrada 1260 Enduro.

A massive 45 degree, 1250cc, V-twin, liquid-cooled engine acts as a stressed member and aids the newly developed trellis frame on the Pan America. The engine is mated to a six-speed gearbox that will transfer power to the rear via a chain drive. Keeping with the nature of the bike, the Pan America gets long-travel upside-down forks up front and a monoshock at the rear, which may get some sort of adjustability to keep up with its competition. A Brembo configuration with radially mounted calipers for braking duties paired with the off-road oriented Michelin Anakee Will tubeless types to complete the setup. The front and rear alloy rims with stainless steel spokes seem to be of 19 and 17 inches, respectively.

Striking out from its traditional cruiser roots, Harley-Davidson has managed to design a thoroughbred adventure tourer. Although it may look rough-and-tough, it still features quintessential Harley elements. The boxy design language, which flows from the front fairing to the tail, is reminiscent of the Road Glide Special. Staying true to the adventure nature, the Pan America seems to have a tank developed from the ground up with plenty of fuel holding capacity. The tank also features an integrated instrument console, which is something we’ve seen on most cruisers from the company. Expect to see a massive TFT screen loaded with all rider focused information, including sat-nav, behind the front visor. As one would expect from a Harley, touring comfort is essential. So the split seats offered are elongated, wide and well cushioned. As the name suggests, the bike is an adventure tourer and it doesn't come short of ADV touring elements. The bike features handguards with integrated turn signals, an adjustable windscreen, a beefy aluminium skid plate, engine crash bars and a huge upswept end can.

Triumph Tiger 1200 : All the updates on the Tiger 1200 have been made in the right direction to make this big adventure-tourer more appealing both on the road and off it. If you need a motorcycle that'll take you across the globe, we highly recommend getting the Tiger.

BMW R 1200 GS: The sheer size of the GS is intimidating to say the least, but the bike is a brilliant all-rounder, be it on or off the tarmac.

When Harley-Davidson announced the Pan America 1250, it blew our socks off. Given the company’s vast experience in flat track racing, we expect the Pan America to be a hoot to ride off the beaten track.

Harley Davidson Pan America 1250 is going to launch in India with an estimated price of Rs. 16.00 lakh