The Pulsar 150 was a smashing looking bike when it made its debut many moons back. But with the passage of time, Bajaj hasn’t updated the bike and the new model, which was launched earlier this year, looks similar to the older bike. While the older bike featured a dual-tone finish which looked good, the new Pulsar 150 gets revised graphics that m akes it a look more like a commuter bike. The new motorcycle is BS-IV-compliant and gets AHO (automatic headlamp on). It also gets reflective tape on the wheels. The instrument console remains a semi-digital unit, but gets a faux carbon fibre finish that looks nice. 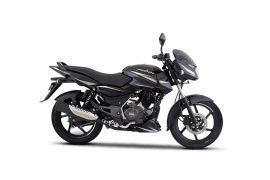