Can the Suzuki Gixxer be the product that can finally beat the Yamaha FZ FI in the 150cc space? And to make things interesting we have also brought along the similarly priced TVS Apache RTR 180 to the games.. 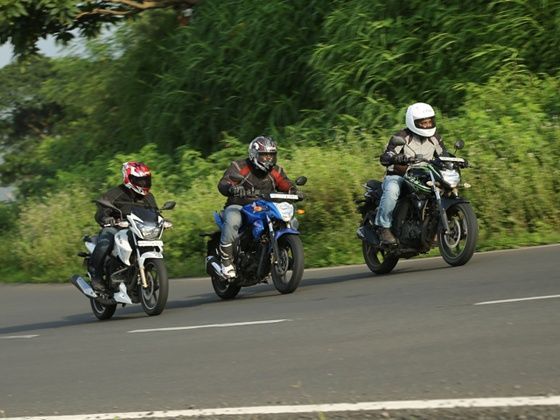 Carving a niche for oneself in the Indian two-wheeler market isn’t easy. Many have tried but only a few have succeeded. Suzuki tried to make its presence felt with the Hayate and the GS 150R but we won’t term these models as runaway successes. That hasn’t stopped Suzuki from trying. And its latest, the Suzuki Gixxer, is the Japanese company’s best yet. But, is it better than our current champion the new Yamaha FZ Version 2.0? Also, what if you weren’t looking for a 150 but the best you can have for this price… To answer that, we have the most performance packed motorcycle you can buy for this money, the TVS Apache RTR 180 locking horns with the Suzuki Gixxer and the Yamaha FZ-S v2.0.

One of the main reasons for the Yamaha FZ’s success was its brute street bike styling. Yamaha designers haven’t fiddled much with the basic design of the new FZ FI and have added subtle details to make it more visually appealing. Design highlights on the new offering include sharper headlamp, petite tail section, split seats, redesigned muffler and restyled full digital instrument cluster. The only grouse I personally found with the bike is the rear tyre hugger which doesn’t gel with the overall design. It’s no secret that the Suzuki Gixxer’s design has been inspired from the Yamaha FZ.  Design elements that help the Gixxer stand out include a chiseled fuel tank with tank shrouds, beefy chrome tipped muffler, Y-spoke wheels, chunky 140 section rear tyre and a LED tail lamp that is neatly integrated into the rear section.

The styling of the Gixxer is in sync with modern street bikes from around the globe with a mass forward design and one can appreciate the design best in profile. The only disappointing bit on the bike is its plain looking headlamp which looks out of place among the various cuts and creases of the Gixxer. The Suzuki Gixxer employs an all-digital instrument cluster that displays a plethora of information along with a shift light indicator. But owing to the huge amount of information on offer it becomes a little difficult to read when in motion.

The TVS Apache RTR 180 shows its age in company of these modern offerings. The DRL’s is the only detail that makes the bike a bit visually striking but it begs for a design update. In terms of styling, it’s a tie between the Yamaha FZ and the Gixxer with the Apache bringing up the rear.

Powering the Yamaha FZ v2.0 is a new engine. It has slightly lesser capacity and lesser power figures compared to the older FZ. But the new motor now gets electronic fuel injection instead of a carb. The air-cooled motor generates 13.1PS of peak power and 12.8Nm of torque. The engine feels refined and composed but the drop in power has affected the bikes performance and it doesn’t feel as eager as its rivals. The Yamaha FZ FI is happy cruising between speeds of 80 to 90kmph but starts to struggle once you hit a ton. Power is transmitted via a 5-speed gearbox that works effortlessly.

The Suzuki Gixxer gets a larger 155cc heart. It develops more power and a higher peak torque that are rated at 14.8PS and 14Nm, respectively. Not surprisingly, the Gixxer feels quick on its feet and the air-cooled motor is an easy revving one too. It sounds better as well and compared to the FZ is almost devoid of vibrations. The Suzuki Gixxer performs better when it comes to ride-ability, out right acceleration and cruising ability. Where the FZ struggles at ton up speeds, the Gixxer feels relaxed as if it still has some more go in store.

The TVS Apache RTR 180 meanwhile has the go as well. Its capacity and power advantage come to the fore particularly at higher speeds. It definitely is the fastest bike here but then with the Apache’s motor pushing out 17PS of maximum power and a healthy 15.5Nm of torque, it was expected. But the engine isn’t as refined as the Japanese competition and the vibrations dull the performance advantage to a certain extent.

In terms of riding ergonomics both the Suzuki Gixxer and Yamaha FZ have similar seating position with wide handlebar, slightly rear biased footpegs that result in an upright and comfortable riding position. Personally I felt the Gixxer was a bit more comfortable owing to its slightly raised handlebar but the FZ has more space to move around. The TVS Apache RTR 180 feels cramped in comparison. The clip-on handle bars and rear-set footpegs don’t help either.

The Yamaha FZ FI employs the tried and tested layout. It uses a diamond type frame that sits on meaty front forks and a monoshock at the rear. The setup (including the steering geometry) gives the FZ an unparalleled level of stability, be it in a straight line or when leaned over in a corner. It feels planted, reassuring and fun. It’s not the quickest tipping into corners but nothing a slightly more forceful push on the handlebar can’t overcome. It’s equally stable and feedback rich when it comes to braking with its disc brake upfront offering good bite and progression. The biggest shortcoming of the FZ here is its stiff and at times uncomfortable ride quality.

The Suzuki Gixxer rides much well. One can’t term it as plush, but it remains comfortable over almost all surfaces. But what helps the Gixxer take the lead here is its handling. It’s almost as well sorted and intuitive as the FZ but unlike the Yamaha needs less effort when it comes to changing direction. We would have liked better brakes though. These aren’t low on bite or feel, but the front disc setup could do with better progression. It feels a bit soft initially and begins biting a little late for our liking. Not surprisingly, the Suzuki Gixxer cycle parts are pretty similar to the FZ from meaty front forks to a monoshock rear and even the tyre sizes are identical on the two motorcycles.

The TVS Apache RTR 180 is the quickest handling bike here. And one with great braking ability too; it is after all the only bike here to get a disc brake at the front and the rear. The TVS Apache changes directions at the drop of a hat and feels lively and involving. Flicking the Apache from corner to corner is a joy but is less forgiving compared to its rivals. Get it right though and it rewards you. Surprisingly for a motorcycle that handles so well, the ride is supple too. But its front does tend to bottom out at places uncomfortably; something the FZ and the Gixxer resist very well.

With a sticker price of Rs 78,300 the Yamaha FZ FI is the costliest bike among the trio. Although the changes made on the FZ FI are appreciable, the almost Rs 6,000 premium over its rivals doesn’t make it a value for money proposition. Fuel efficiency has always been the Achilles heel for the older FZ but the fuel injection and Blue Core technology has certainly helped improve the fuel efficiency. At Rs 72,199, the Suzuki Gixxer is the most affordable and the most fuel efficient. Priced at Rs Rs.72,590, the TVS Apache RTR 180 offers the most bang for the buck given the higher output and a rear disc brake. It is the least efficient here however.

The TVS Apache RTR 180 is still a fun to ride, quick motorcycle that gives you a lot of bang for your buck – it is the only bike with a rear disc option here. But compared to these new motorcycles it falls short on design, ergonomics and most importantly refinement. It also falls short on fuel economy.

The Yamaha FZ v2.0 even though great on dynamics, looks and aspiration is not our champion anymore. And the biggest reason for that is its pricing. For what it delivers compared to the Suzuki Gixxer, a premium of Rs 6,000 over the Suzuki is just too much to ask for. The Gixxer then with its looks, refinement and lovely engine performance wins this test. It’s also comfortable, well built and fun to ride. Did we mention it is also the most affordable here?