Can the new Honda CB Hornet 160R displace the Suzuki Gixxer as our choice as the best executive 150cc offering and how does it fare against the genesis of the segment, the Yamaha FZ-S FI? We put these machines through a vigorous test to get you the answer 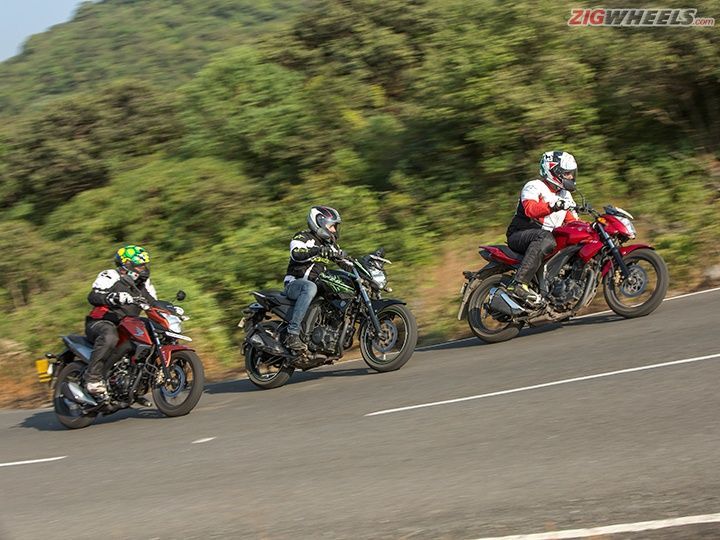 The 150cc segment isn’t the volume churner for bikemakers in our market as it’s the 110cc and 125cc offerings that lead the charge, but slowly and steadily its market share is increasing. The Yamaha FZ set the standard in the executive 150cc segment with its butch styling, engaging handling dynamics and a well-engineered powerplant. It continues to dominate the sector in terms of sales numbers and last year the Japanese two-wheeler giant gave its popular motorcycle a mechanical and cosmetic update in the form of the Yamaha FZ-S FI. Suzuki also realised the potential of this segment and introduced the Gixxer, a motorcycle that clearly had the Yamaha FZ as its template and inspiration.

The Gixxer went on to prove that a single good product is enough to change the tides of a manufacturer, similar to what the iPod did for Apple many ages ago. Honda was feeling a bit left out among all this action, but they now have got a new product in the form of the Honda CB Hornet 160R to take on its Japanese rivals. Can the Hornet 160R replace the Suzuki Gixxer as our pick as the best premium 150cc motorcycle on sale in India? We head to the twisties of Amby Valley to find that out.

Yamaha’s designers gave the FZ-S FI a minor design tweak instead of a complete overhaul last year and it seems to have worked. The chiselled fuel tank, V-shaped headlamp, stubby exhaust muffler and split seats combine to give the Yamaha motorcycle an aggressive stance. The Suzuki Gixxer is also an impressive looking motorcycle and the sculpted lines of the motorcycle add a dose of muscle at the correct places. The styling of the Gixxer is in sync with modern street bikes with a mass forward design and one can appreciate the bike best in profile.

The chrome tipped exhaust with twin outlets gives the bike a unique visual appeal while the rear section is quite basic with a petite LED tail lamp. With the CB Hornet 160R, it seems that Honda designers have went full hog to make it an attractive looking motorcycle. The motorcycle adopts an edgy design language with a sharp looking fuel tank which has the shrouds integrated into it while the faux carbon fibre centre panel on it makes the bike standout further. The stout exhaust muffler and the chunky tyre make the rear section of the motorcycle look appealing while the X-shaped LED taillight unit is eye catchy.

All the three motorcycles employ an all-digital instrument console. The unit on the Hornet 160R is a straight lift from the Unicorn 160. In terms of data, the Suzuki Gixxer’s console is the most loaded as it displays gear position and shift light indicator other than the usual fuel gauge, speedometer, tachometer, odometer and trip meter. On the go, the Yamaha’s console feels the easiest to read followed by the Hornet 160R while the Gixxer’s cluster takes time getting used to.

The Honda offering doesn’t get engine kill switch which at this price point is unacceptable while the switch gear also feels a generation old in front of its Japanese competitors. Fit and finish levels along with paint quality on all the three bikes is impressive with the Gixxer feeling a bit more premium than its rivals.

All the three bikes use a similar formula in terms of powerplant: an air-cooled single cylinder unit mated to a 5-speed gearbox. The Yamaha FZ-S FI is the least powerful at 13.2PS and 12.8Nm of torque. Unsurprisingly it is also the slowest motorcycle in the comparo with respect to acceleration and top speed. The bike doesn’t feel as eager as its rivals and one has to wind open the throttle to maintain speeds above 80kmph. That said, the bike has good mid-range punch and the fuel injection has endowed the motorcycle with crisp throttle response while the powerplant feels the most refined.

The Hornet 160R is the most powerful motorcycle among the trio as the 163cc motor delivers 15.9PS and 14.8Nm of torque. But numbers never tell you the real story as on the road it feels a bit underpowered for its specifications. Acceleration is decent but the engine needs to be fed lots of revs to extract punch out of the motor and bottom end of the engine is very weak. Refinement levels is also poor with respect to its rivals but the bike does manage to hold speeds around 90kmph without much effort. The gearbox also feels clunky in comparison to its rivals especially from 1st to 2nd but the gear ratios have been well distributed especially for city riding.

The Suzuki Gixxer slots between its rivals in terms of power output numbers at 14.8PS and 14Nm of peak torque. The Suzuki offering easily feels the fastest of the lot with brisk acceleration and power is on tap throughout the rev band with a throaty exhaust note adding to the fun quotient. The motorcycle never feels out of breath and one can cruise at close to triple digit speeds rather readily, something that its rivals can’t. Refinement levels on the powerplant are good while the 5-speed gearbox offered crisp and precise gear shifts.

The motorcycle trio employs a single-piece flat handlebar and mildly rear-set footpegs which is the norm with any modern streetbike. Riding position on the Yamaha FZ-S FI and Honda CB-Hornet 160R is similar as the handlebars feel a bit stretched out which results in an upright posture. The Honda motorcycle’s tank has been designed in such a way that the rider can lock his thighs firmly around it. Riding position of the Suzuki Gixxer just feels spot on with the rider leaning forward mildly while the fuel tank contours allows the rider to snugly hold the bike and it definitely feels the most supreme in terms of riding ergonomics.

The seats cushioning on the Yamaha FZ-S FI was the best and spending long hours on the saddle doesn’t make the rider fatigued which isn’t the case with the Hornet 160R as the padding is very shallow and on long rides the riders bum does get sore as we found out on our return journey from Goa to Mumbai. The Gixxer’s seat is a bit too soft for our liking but is better than the Honda.

All three bikes have a similar diamond type frame and have the same tyre specs too, a 100-section front and 140-section rear tyre, while the wheelbase is almost same too. In terms of handling, it’s the Suzuki Gixxer that leads the charge as the bike takes corners with great enthusiasm and even an average rider will be able to push the bike to its limits because of its friendly handling dynamics. It’s a close contest between the Yamaha and the Honda motorcycles when it comes to corner carving but the FZ-S FI holds a marginal edge over the Hornet 160R owing to the fact that it weighs 7kg less. In terms of agility in city traffic conditions, the Honda and Suzuki offerings are evenly matched as both the bikes allows the rider to squeeze through the tightest of gaps whereas the larger turning radius of the FZ-S FI somewhat restricts its movement.

The suspension recipe is also similar - telescopic front forks and monoshock unit at the rear. The Honda CB Hornet 160R offers the plushest ride quality as it absorbed the undulations easily despite being a bit on the firmer side. The Gixxer is a close second but it will send some painful signals to the rider’s back while going through large potholes, and the stiff setup of the FZ-S FI means it’s the least comfortable among the trio.

The Honda CB Hornet 160R that we tested was the CBS variant with petal disc brake on both ends while its rivals came fitted with disc/drum setup. Braking performance of the Honda and Suzuki are evenly matched in second place and we would have preferred more bite from the Hornet 160R, while the Gixxer has good bite but lacks feedback through the levers. The Yamaha FZ-S FI is the winner with respect to providing anchorage as it offered a progressive bite and fine feedback.

The Suzuki Gixxer is the cheapest motorcycle with a sticker price of Rs 77,166 while the Yamaha FZ-S FI is priced at Rs 82,159. The Honda CB Hornet 160R comes in two variants with the base variant being priced at Rs 79,900 and the CBS variant carrying a price tag of Rs 84,400 (the one we tested). So in terms of value for money it is the Suzuki Gixxer that would burn a smaller hole in your wallet. Fuel efficiency is among the most vital criteria for two-wheeler buyers. The Blue Core technology doesn’t seem to have done the trick for the FZ-S FI as it comes last with an overall figure of 42kmpl. The Suzuki Gixxer faired marginally better with an overall mileage of 45kmpl whereas the Hornet 160R is the most fuel efficient at 49kmpl. All the three motorcycles have a 12 litre fuel tank capacity which means the motorcycles will have a real world range of around 550km on a full tank of fuel. Note: All prices ex-showroom Delhi

The Yamaha FZ-SI FI might be the yardstick of this segment but it is clear that the new update hasn’t worked in favour of the Japanese bikemaker. By reducing the power output for more efficiency, they have somewhat lost out on the fun factor that was associated with the bike. What makes life even more difficult is the fact that mileage numbers are still disappointing and the fuel injection system has jacked up the pricing too. Still, it remains among the highest selling bikes in the executive bike segment and enjoys a cult following. The Honda CB Hornet 160R looks the part and it is definitely the most striking looking bike among the trio. Added benefits include stupendous ride quality, decent mileage, good handling dynamics, reliability factor of Honda and the humungous dealer network. But we would have preferred better performance and features, and the pricing is on the higher side for what’s on offer.

This brings us to the Suzuki Gixxer - it presents brilliant handling dynamics, entertaining performance, is feature rich and of course is the cheapest as well. Owing to the above points we have no hesitation in stating that the Suzuki offering still remains our pick as the best executive 150cc motorcycle on sale in the Indian market and it clings on to its crown at least for now.