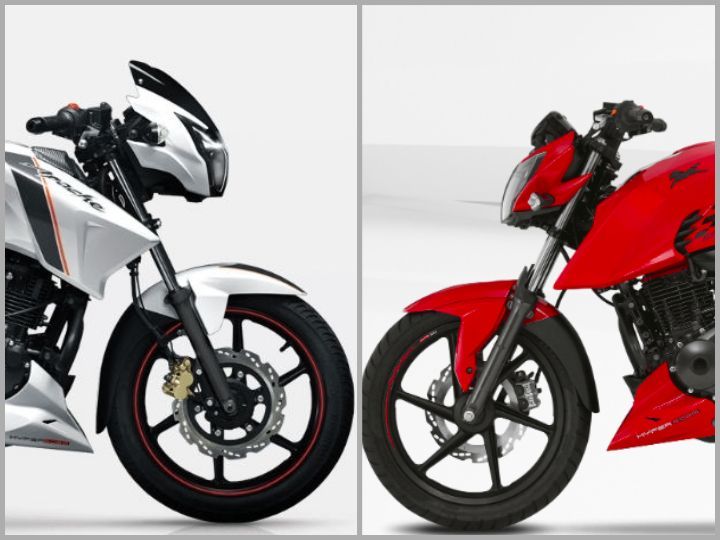 Way back in 2006, the Indian motorcycle market was just waking up to the possibilities of fun-to-ride motorcycles, which offered a bit more than point A to B commute. Born in that year, the TVS Apache RTR 160 took the fight to the popular Pulsar, and boy did it make a mark in the market! In 2008, the Apache racked up sales of over 2,50,000 units. The Apache family received a number of updates in the subsequent years, but its core ethos remained the same: a no-nonsense commuter packed with power. However, with the advent of multiple modern competitors like the Hornet and the Gixxer, the Apache RTR 160 had started to show its age. In a bid to renew its rivalry with the more modern 160cc rivals, TVS launched the all-new TVS Apache RTR 160 4V in March 2018. Let’s look at what’s changed in the new motorcycle when compared to the older generation bike.

Looking at the TVS Apache RTR 160 4V, it is apparent that the bike’s design has been inspired from the Apache RTR 200 4V. However, there are some elements like the single-piece seat and the single-piece handlebar, which make the bike a bit more sober. The sleek headlamp, the muscular tank, the twin-barrel exhaust are reminiscent of its big brother, while maintaining the sporty look. The carb variant comes with an amber backlit console while the fuel injected version sports a white backlight. The latter also features gear-position indicator, lap and acceleration timer, top-speed recorder and low fuel trip meter. On the other hand, the carb model displays only the regular trove of information like speedo, tacho readouts and trip meter among others.

The Apache RTR 160 has a relatively conservative yet aggressive design, thanks to the LED eyebrow-shaped DRLs, muscular tank extensions and a belly pan. In a bid to keep the ageing RTR 160 relevant, the Hosur-based manufacturer launched the Race Edition in April this year. It features minor visual updates like paint-scheme, rim stickers and the likes.

The Apache RTR 160 4V’s engine is based on the RTR 200, but has been heavily reworked to suit the character of this motorcycle. TVS claims that the oil-cooled chamber with ram-air assist reduces the engine heatmap by 10-degree Celsius. The ‘Nano friKS’ coating on the piston makes the engine free-revving, as per the bikemaker.

The Apache RTR 160’s short-stroke engine helps the bike rev and accelerate faster. Both the bikes’ engines work in conjunction with a 5-speed transmission.

For the RTR 160 4V, TVS has used a split-cradle synchro stiff frame a la the RTR 200. The auto major says that the chassis improves the stability by 25 per cent. The older RTR 160 uses a conventional twin-shock setup at the rear, coupled with a rectangular swingarm. Unfortunately, none of these motorcycles get ABS, even as an option.

Prices for the RTR 160 4V start from Rs 81,490 for the carburetted rear drum variant. The rear disc variant of the carbureted bike will set you back by Rs 84,490, which is Rs 3,000 more than the base model. The range-topping FI version costs Rs 90,490. For this premium of Rs 6,000, you get a more informative instrument console and crisper throttle response, thanks to fuel injection.