The Honda Hornet 160R is the latest premium 150cc offering from the Japanese two-wheeler giant. We do a spec compare between the new Honda motorcycle against the Suzuki Gixxer and the Yamaha FZ-S FI 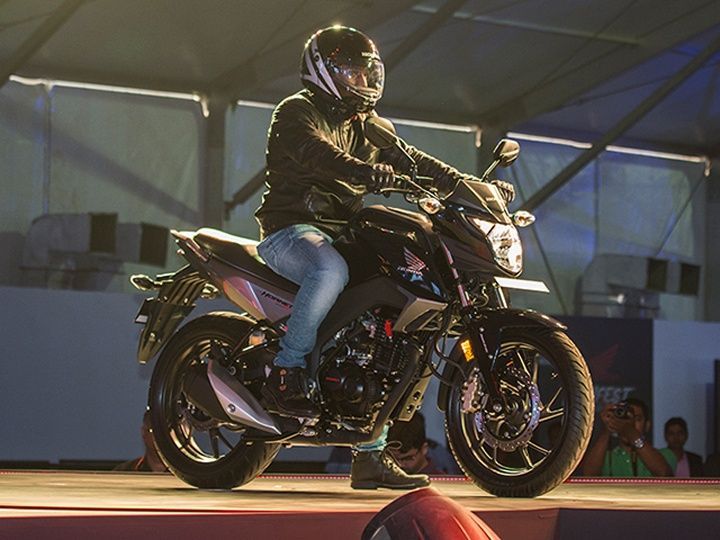 All the three bikes employ a diamond type frame, having ridden the Suzuki Gixxer and Yamaha FZ-S FI we have to say that the Gixxer has an upper hand on the handling front but the Honda Hornet 160R with its 140mm section rear tyre should make life difficult for the Suzuki offering. It’s the same case with suspension as well; all the three bikes ride on telescopic front forks and a monoshock unit at the back.  Talking about braking, the Suzuki Gixxer and the Yamaha FZ-S FI employ disc brake at front and drum brake at rear. The Honda Unicorn 160R will feature disc brake at front and rear while CBS will be an optional extra. The wheelbase of the Yamaha FZ-S FI and Suzuki Gixxer is similar at 1,330mm, Honda hasn’t given the figures for the Hornet 160R but we expect it to be similar to the Unicorn 160 at 1,324mm. Ground clearance of the Yamaha and Suzuki is also same at 160mm while expect the Honda Hornet 160R to have 150mm. The Yamaha FZ-S FI is the lightest at 132kg while the Gixxer comes second at 135kg expect the Honda Hornet 160R to tip the scale around 136-140kg.

Honda officials haven’t revealed specification of the Hornet 160R yet. But we have a feeling it will be the same powerplant as seen on the Honda Unicorn 160 that was launched earlier this year. The 163.7cc, air-cooled motor churns out 14.5PS of max power and peak torque rating of 14.6Nm. It definitely has the displacement advantage and for this purpose is also the most powerful motorcycle with respect to its rivals. The Suzuki Gixxer comes second with a 155cc mill producing 14.8PS at 8,000rpm and 14Nm of peak torque at 6,000rpm. The Yamaha FZ-S FI is the least powerful among the trio as the 149cc motor pumps out 13.1PS of power and 12.8Nm of maximum torque. All the motorcycles employ a 5-speed gearbox. The Yamaha FZ-S Version 2.0 is the only motorcycle to feature fuel injection.

To improve fuel efficiency all the three motorcycles takes use of technology. Yamaha calls it Blue Core; Hornet 160R goes for Honda Eco Technology while the Gixxer makes use of Suzuki Eco Performance. Talking about fuel efficiency the Yamaha FZ-S and Suzuki Gixxer return around 44kmpl, having ridden the Unicorn 160 it is safe to assume that the Honda Hornet 160R will have a mileage figure of around 47kmpl. Also from past experience we can say that the Yamaha FZ-S is definitely the most refined motor among the trio with the Suzuki and Honda offering coming a close second. Talking about pricing the Suzuki Gixxer has been priced at Rs 75,040 while the Yamaha FZ-S FI has been priced at a premium owing to the fuel injection tech and carries a sticker price of Rs 82,659. The Honda Hornet 160R is expected to be priced around Rs 77,000 to 80,000. Note: All prices mentioned are ex-showroom Delhi.