On, paper, where does the newly launched Honda CB Hornet 160R stand against the Suzuki Gixxer and the Yamaha FZ-S FI? 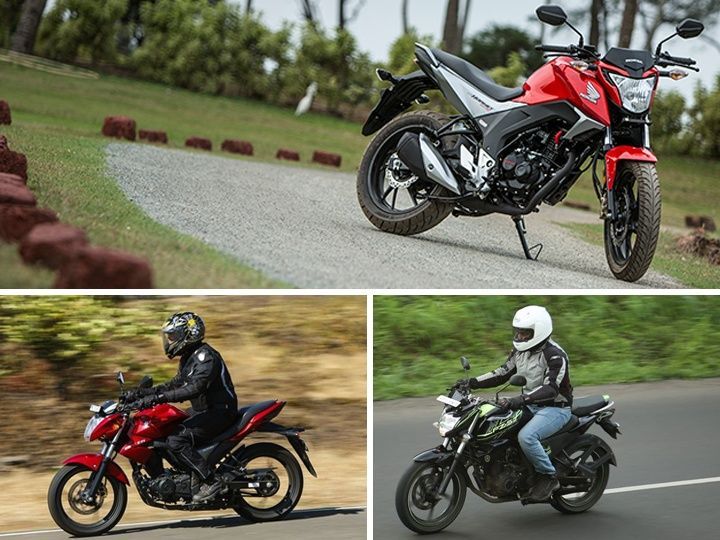 In the last year or so, the premium 150cc space of motorcycles has seen a lot of movement. Yamaha first brought in the updated FZ version 2.0 with some cosmetic updates and fuel injection. Suzuki soon followed with the launch of the Gixxer. While Honda did bring in the Unicorn 160, it was essentially a replacement to the aging Unicorn. Now they have launched their new premium product in the CB Hornet 160R, and this one too looks pretty promising.

Features and equipment: Consider the features that each of these motorcycles come with and the competition starts to get even more intense. Let’s start with the newest kid on the block, the CB Hornet 160R. The feature that tops the list of importance is undoubtedly the Combi Braking System (CBS). Thanks to this system, hit the rear brake and equal force is applied on the front as well. Other features on the CB Hornet 160R include a full digital instrument cluster and a disc brake option at the back.

Moving on to the Suzuki Gixxer, while it doesn’t get the CBS or an optional disc brake at the back, it does get a fully digital instrumentation with 2 trip meters and a clock. One feature that is really missed on the Hornet 160R but is present on the Gixxer is the engine kill switch.

Like the Honda and the Suzuki, the Yamaha FZ-S FI too gets digital clocks. The tuning fork brand offering is the only one to come with fuel injection; the other two in discussion being carburetted. The FZ-S v2.0 is also the only motorcycle among the three to get split seats. All the three motorcycles come with telescopic forks up front and a monoshock setup at the back.

Price and Fuel Efficiency: One thing that the CB Hornet 160R is expected to score really well in is efficiency. Considering it makes slightly more power and torque than the Unicorn 160, the CB Hornet is expected to return around 52-53kmpl, which is still higher than the Gixxer’s 49kmpl and FZ-S Fi’s 45kmpl.

As far as pricing is concerned, the Yamaha FZ-S FI is the most expensive of the lot at Rs 82,159 while the Suzuki Gixxer is the cheapest at Rs 77,166. Honda has smartly placed the CB Hornet 160R exactly between these two offerings with a sticker price of Rs 79,900. All prices ex-showroom Delhi.