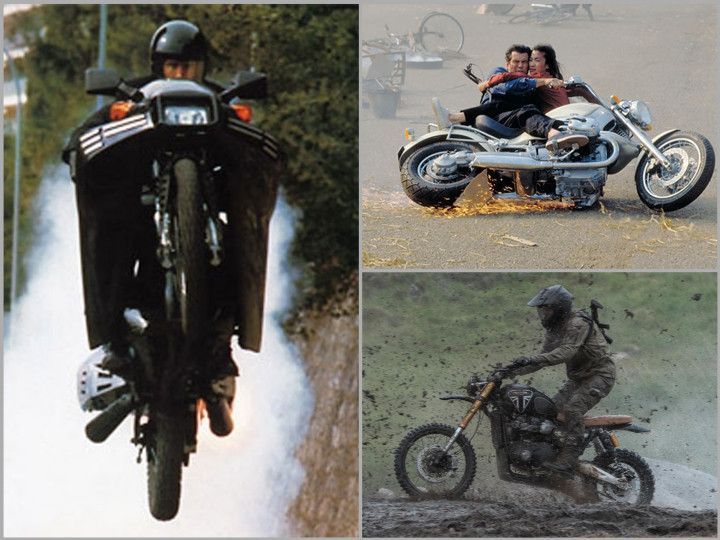 Most of us often associate James Bond movies with a suave, smooth-talking spy taking on bad guys in exotic, gadget-loaded cars. But eagle-eyed motorcycle enthusiasts would know that some of the movies are as much about motorcycles as about cars. Take a look at our top 5 best bikes from the iconic film series:

The Yamaha XJ650 Turbo was Yamaha’s showcase of turbocharged marvel in the 1980s when motorcycles with forced induction engines were the newest fad. Even in its stock form, the Yammie looked every bit a futuristic Bond Bike, thanks to the sharp fairing with integrated square headlamp, large windshield, and a boxy yet angular tail section. The fairing had a massive cut on the sides to allow the air-cooled 653cc inline four-cylinder engine to breathe. It churned out a respectable 91.2PS and 81.6Nm.

Sean Connery handles the bike with such ease, its visual bulk belies its agility, going up and down through the stairways chasing an equally agile Renault 5 Turbo. True to Bond’s spirit, the bike had wheel guards, afterburners (What’s a turbocharged bike without some turbo-boost huh?), and of course, rocket launchers.

The opening chase sequence starring Daniel Craig astride the humble Honda CRF250R shows you don’t need a powerful motorcycle to intercept your target in the busy streets of Istanbul. The massive ground clearance, light kerb weight, and the long travel suspension makes the Honda CRF250R feel as if it's gliding over the tiled rooftops. Since Daniel Craig ‘borrows’ the bike from a crowded market place, it does not have fancy gadgets, but Craig almost manages to accomplish the mission with the bike’s agility alone. We’re saying ‘almost’ because, unfortunately he has to crash the bike to get onto a train where he continues the pursuit on foot.

Oh, and Bond's stunt was carried out by none other than the iconic Australian stunt rider, Robbie Maddison. Remember the absolutely mind-boggling motorcycle surfing in the middle of a gosh darned ocean that went viral a few years ago? Yep, that’s him.

A tight Bond chase scene is the last place where you’ll see a big burly cruiser, but the BMW R 1200 C (the new BMW R 18’s forefather) holds on its own rather well. Piloted and umm, co-piloted by Pierce Brosnan and Michelle Yeoh, the two stars’ chemistry is palpable as they try to escape while being literally cuffed together. And yes, this one too does not have any fancy gadgets but Bond and his femme fatale spy Wai Lin rely on their wits to get rid of their pursuers with whatever’s available on the route. Reminds us of the ‘Pursuit Breakers’ in the OG videogame Need For Speed: Most Wanted.

The chase scene is one of the most entertaining ones in the Bond movie series. Riding over rooftops, popping wheelies (it’s 1170cc boxer engine offers 98Nm on tap at just 3000rpm), and even jumping over a freaking helicopter, it shows that a skilled MI6 agent can even morph a 255kg cruiser into a dirt bike!

Triumph Tiger 900 Rally Pro In No Time To Die

Triumph Motorcycles being the official partner in the new No Time To Die movie is as British as it can get. And for its chase sequences, the British marque has offered two of its very best: the Scrambler 1200 XE, and the Triumph Tiger 900 Rally Pro. In fact, the movie makers received prototypes of the Tiger 900 Rally Pro before it was unveiled to the general public.

Stunt coordinator Lee Morrison said; “Triumph gave us early Tiger 900 prototypes before launch so we could film in 3 key locations well before the bike’s official reveal. I have to say that we have literally thrown everything at them. Big craggy sharp rocks, deep boggy mud, high speeds, big jumps and huge climbs and descents across a variety of conditions. The Tigers really have stood up to the task incredibly well, with no mechanical issues, and to me this really proves their go-anywhere credentials.”

Armed with fully-adjustable long-travel suspension, engine guards, Arrow exhaust, the Tiger 900 Rally Pro handled massive jumps across the plains in chase scenes with such grace and poise! To appeal to the Bond fans, Triumph also launched the 250-unit limited Tiger 900 Bond Edition abroad with a whole host of accessories, exclusive livery and a signed certificate - all for a hefty USD 20,100 (around Rs 15.10 lakh).

Triumph Scrambler 1200 XE In No Time To Die

The Triumph Scrambler 1200 XE is massively capable off the road, and is nimble enough to be a venerable machine both in the hands of Bond and the villain. In the initial part of the movie, the iconic jump over a wall through an impossibly steep incline really shows the mechanical and dynamic prowess of the Scrambler. Daniel Craig’s stunt double for this impressive feat was the four-time World Enduro Champion, Paul Edmondson from the UK.

Even this motorcycle received a special Bond Edition iteration for the masses. It was launched at USD 18,500, which is around Rs 13.89 lakh. You can read all about it in our report here.