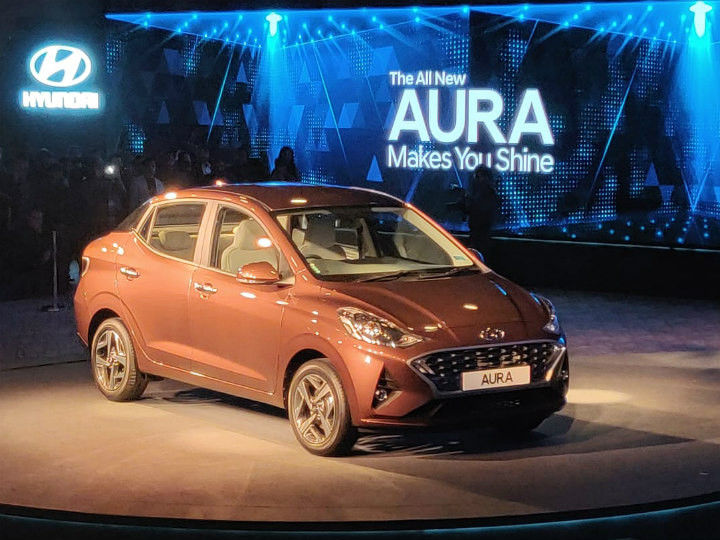 After its unveil in December 2019, Hyundai has finally launched the Aura compact sedan with introductory prices ranging from Rs 5.80 lakh to Rs 9.23 lakh (ex-showroom India). Unlike the Xcent/Grand i10, the Aura is based on a new platform. It is codenamed AI3, which is the same platform that underpins the Grand i10 Nios hatchback. Here’s a closer look at Hyundai’s new compact sedan in detailed images.

Since it is based on the same platform as the Grand i10 Nios, the Aura takes a variety of design cues from the hatchback, including the front end consisting of a cascading grille and projector headlamps.

Other carryover features at the front include twin boomerang-shaped DRLs. There are some differentiating bits like a black plastic or silver accent surrounding the honeycomb grille. Another difference is the lower portion of the grille that extends towards the aero lip on the front bumper.

The Aura’s boot seems well integrated. However, it does look a little stubby from certain angles. It measures 3995mm in length, 1680mm in width, 1520mm in height and gets a 2450mm-long wheelbase.

The Aura also features a different set of 15-inch diamond-cut alloy wheels when compared to its hatchback sibling.

The rear of the Aura features a tailgate with an upward angle that meets with the roofline. It also features a Ford Aspire like license plate housing on the bumper.

A closer look at the rear reveals the presence of wraparound LED tail lights connected by a chrome bar ont the boot lid.

Head inside the Aura and you’ll see a cabin that’s almost identical to that of the Grand i10 Nios. However, the sedan gets brown inserts around the cabin. It also features more steering-mounted controls than the Grand i10 Nios. The Aura Turbo variant features red inserts for a more sporty finish.

In terms of features on offer, the Aura is almost identical to the Grand i10 Nios. Some of them include an 8-inch infotainment system with Android Auto and Apple CarPlay, climate control, steering-mounted audio controls, push-button start/stop, and a wireless phone charger. It also features cruise control, which isn’t found on the Grand i10 Nios.

Under the hood, the Aura is powered by four BS6 compliant engine options. The first petrol engine is a 1.2-litre MPI engine good for 83PS and 114Nm. It is also offered in CNG trim, delivering 69PS and 95Nm. The second and most powerful petrol option is a 1.0-litre turbo engine making 100PS and 172Nm of torque. The diesel option is a 1.2-litre Ecotorq turbo engine delivering 75PS and 190Nm. All engines are paired to a 5-speed manual gearbox as standard. The AMT option is limited to the 1.2-litre petrol and diesel engines.

The Aura sedan is offered in a total of seven variants and 12 different trims. Its rivals include the Maruti Suzuki Dzire, Honda Amaze, Ford Aspire, and Volkswagen Ameo.