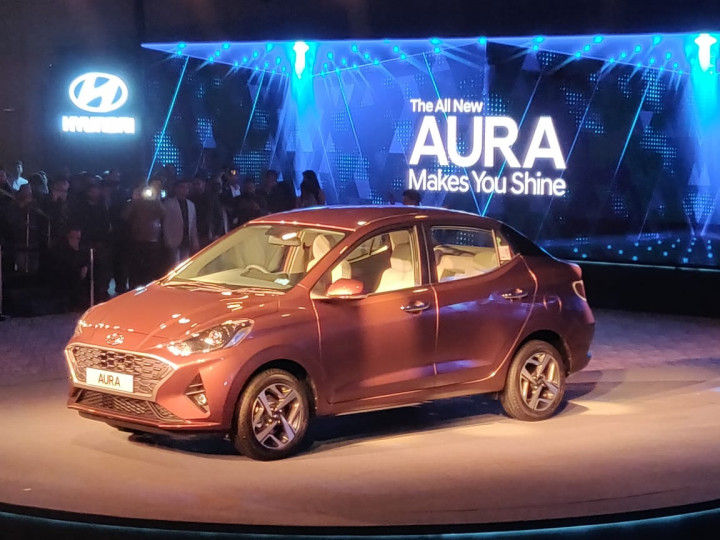 Hyundai India has launched the Aura sub-4 metre sedan at prices starting from Rs 5.80 lakh. Based on the Grand i10 Nios hatchback, it is available in 12 trim levels with four BS6-compliant engine options. Here’s a look at the detailed prices of each variant:

The Aura’s fascia is almost the same as the Grand i10 Nios. Keen eyes will notice the revised detailing in the grille and the twin Boomerang DRLs on both ends. In profile, Hyundai has done a decent job of integrating the boot to the Grand i10 Nios’ body. The roof doesn’t sharply cut down as seen in the VW Ameo. That said, it does look stubby when viewed from certain angles. At the rear, the Aura comes with split LED tail lamps connected by a chrome trim.

Inside, the Aura’s dashboard is similar to the Grand i10 Nios except the sedan comes with brown trim inserts. Meanwhile, the Aura Turbo variant comes with red inserts denoting its sporty intentions. The feature list between the Aura and Grand i10 Nios is nearly identical. Highlights include an 8-inch infotainment system, Android Auto and Apple CarPlay, climate control, steering-mounted audio controls, a wireless phone charger, semi-digital instrument panel, a multi-info display as well as keyless entry with push-button start. It also comes with cruise control, a feature absent in the Grand i10 Nios.

Under the hood, the Aura comes with four BS6-compliant engine options: one diesel and two petrol units. The 1.2-litre Kappa petrol engine is offered with a CNG variant as well. Here are the detailed specifications of each engine:

Its primary rivals include the Maruti Suzuki Dzire, Honda Amaze, Ford Aspire and Volkswagen Ameo. You can read our detailed on-paper specification comparison of the Aura and its rivals right here. Meanwhile, we’ll be driving the Aura soon. So stay tuned to ZigWheels for our detailed first drive review.