Does Ducati’s devil have the edge over the brash Americans? 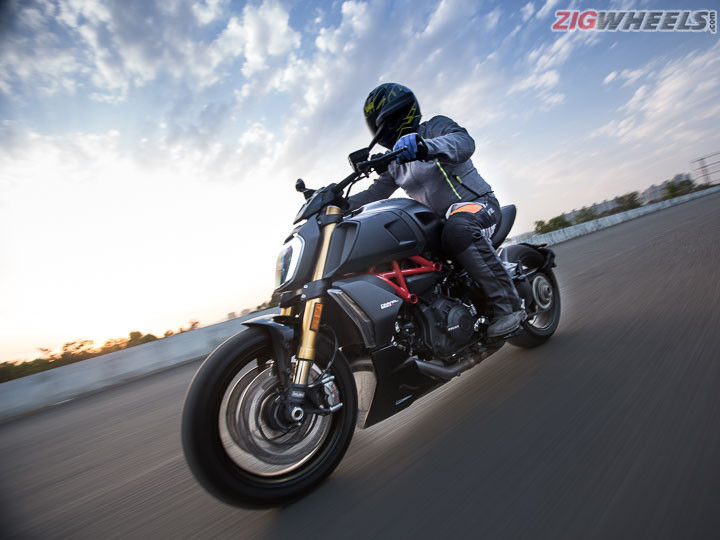 The Ducati Diavel 1260 is a bike that defies the laws of physics. It looks big, packs a large engine and has got a rear tyre wider than a Mahindra Scorpio. You are bound to think that such a motorcycle will feel heavy, will show its weight in the bends and is only great for going blisteringly fast in a straight line. But you will be astounded by the Diavel 1260, given how versatile it is despite retaining a wild side. And while it might be one of the craziest motorcycles from Europe, across the Atlantic, you have similarly wild machines in the form of the Indian FTR 1200 S and the Harley-Davidson Fat Bob.

While this has all the makings of an epic comparison test, the sad bit is that in less than a month’s time, we are not going to have any of these three on sale in India. The Euro 5 emission norms might have kicked in from January 1, 2020, for new models but for existing models like these three bikes, the EU has granted a 12-month grace period. Hence, the earliest that we would see Ducati or Indian bringing BS6-compliant versions of these bikes in India is 2021. And Harley, well, will be selling the BS6-compliant Softails in India from April 1 but the Fat Bob isn’t going to be one of them. This brute too shall arrive in 2021 with a larger 114ci (1,868cc) engine. Thus, there is no point of a comparison test currently. However, we do have the performance figures of the bikes. Which one has the bragging rights amongst the three?

It is quite neck and neck between the Diavel 1260 and the FTR 1200. The Ducati does have a wider powerband than the Indian, helping its cause in a straight line. Once you start creeping beyond the 100kmph mark, the Diavel starts to show its power advantage as it has 159PS on tap, nearly 34PS more than the FTR.

Ducati does offer three levels of Launch Control as part of the Diavel’s electronics package. We did try the lowest and intermediate levels of the aid and found that while it does make for less fussy starts, no wheelspin or sidestepping drama, the acceleration times weren’t better than what we had with traction control switched off.

For a Harley to boast a 5-second 0-100kmph acceleration time is pretty impressive but it fails to stick around in this fast company. The Fat Bob runs out of steam quickly and the short gearing forces you to shift up earlier than what you would have done on the other two bikes.

Even though all of these V-twins have phenomenal mid-range performance, the FTR’s rorty engine jumps at the slightest increase in throttle input. The urgency in power delivery from the new 1200cc 60-degree V-twin is mind-boggling as you can experience small power wheelies even in the third cog.

The Diavel isn’t far behind. It rumbles happily in third as well as fourth gear while doing moderately quick city speeds. The quickshifter works flawlessly on the Diavel but you are greeted with a thunk at every downshift. Given the size of the engine, the sound shouldn’t be that much of a concern.

Riding slowly in higher gears is not what the Harley likes. The Milwaukee-Eight 107 shudders at revs lower than 1000rpm but they settle down post 1250-1350rpm.

Grippy Pirelli rubber and better performing Brembo M50 monobloc calipers are the sole reason the Diavel 1260 S manages to shed speed so much quicker than the Americans. Brake lever feedback is incredible. The brake bite is fierce. Braking progression is linear but quick. Even the ABS system rarely kicks in during panic braking situations.

The older-gen Brembo M4.32 monoblocs on the Indian are not as fierce as the Diavel’s M50s. Plus, the flat-track racing-inspired Dunlop rubber aren’t as grippy as the Pirelli Diablo Rosso IIIs.

The Harley is running on a conventional fixed-caliper setup. It gets smaller 275mm discs at the front, the other two running 320mm discs. It certainly doesn’t help its case by being the heaviest of the lot, weighing 74kg heavier than the Indian.

Verdict:
Each one of these three motorcycles is the wild child of its manufacturer. While all three have very different personas, each one of them does manage to put a wide grin inside your helmet. However, the crux of the story is, does the Ducati have the edge? Over the Harley-Davidson Fat Bob, definitely. It is quicker, more sophisticated, feature laden and looks mental. Personally, the Fat Bob’s menacing LED headlight is one of the best design elements I have seen on a motorcycle but it cannot rival the exotic appeal of the Diavel.

The case isn’t as clear cut with the Indian FTR 1200 S. These two motorcycles are insanely quick. The Ducati might be a big fast blur on the highway but the Indian is a sleek rocket right on its tail. Where the Diavel edges out is with the electronic aids which make your life oh so easy. You could ride clutchless for nearly the entire day without breaking a sweat. Wish the Indian’s electronics were a bit more sophisticated rather than just being an on/off switch. The scary bit is that the ABS intervention as well as the traction control are linked. If you want to kill the traction control, you lose out on ABS, which is not what anybody would want to try out on a Rs 16 lakh motorcycle.