Does a larger engine just make the new Diavel a better muscle cruiser? Or is there more to the new bike under all that brawn? 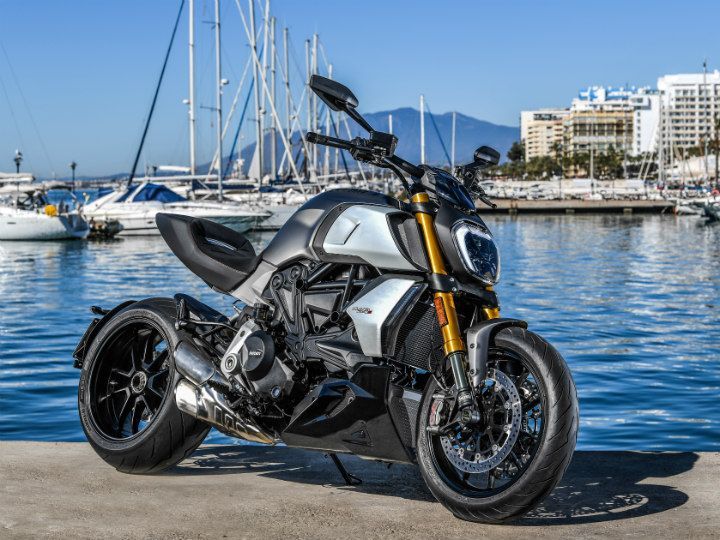 The Ducati Diavel has always been a bit of an oddball. It’s supposed to be the muscle cruiser in the same vein as a Yamaha V-Max or Suzuki Intruder M1800, but that wouldn’t be a fair thing to say as its riding position leans towards a sports naked. While Ducati did address this with the XDiavel (making it more of a cruiser that is), the regular Diavel has ended up getting an unfortunate, but undeserved, reputation as a “show-off motorcycle,” at least in the company of “serious” bikers. So eight years on, this all-new second generation Diavel that you see here has a serious image issue to rectify.

Bigger and better
First things first, the engine. It’s the larger 1262cc L-twin from the XDiavel that has found its way into this new Diavel. Now it wasn’t as if the earlier Diavel’s motor was lacking oomph in any form, but this updated motor is not just about additional grunt. That’s there of course - 7PS and 6Nm extra, bringing the total to a whopping 159PS of power and an equally ridiculous 129Nm of torque. But before you scoff at the somewhat minor gain in peak figures brought about by the 64cc gain in cubic capacity, know that now there is well over 100Nm of torque available from 3500rpm onwards. Thank the DVT (Desmodromic Variable Timing) system for this, as it significantly improves bottom-end performance as well.

To ride, the experience is just as mental as ever. Crack open the throttle hard, and you’re shoved forward relentlessly as the L-twin bellows its way to the redline, with the front wheel desperately trying to claw its way into the air. It’s almost like being hit in the back by a freight train, nay, like straddling a Saturn V rocket making its way to the moon! The acceleration simply belies its massive 244kg heft! Slow things down, though, and there’s a complete personality change. Sure, there’s only so much tractability that a gigantic L-twin can manage, but compared to the previous Diavel, this one feels a lot smoother at city speeds. There’s a significant reduction in that typical jerkiness associated with the larger Ducati motors when pottering around in traffic. And the throttle is easier to modulate too, especially when you switch to the Urban riding mode. Speaking of which...

Majorly overhauled electronics
You do have all the riding modes that are now standard with all modern Ducatis - Sport, Touring and Urban - the last of which not only reduces throttle sensitivity but also cuts down max power to make the bike more usable in urban, or even wet conditions. The big change here is a new 6-axis IMU (Inertial Measurement Unit) designed to measure the bike’s pitch, yaw and roll orientation. With the IMU comes Ducati’s EVO set of electronic rider aids - eight levels of Ducati Traction Control EVO, eight levels of Ducati Wheelie Control EVO and three levels of Bosch Cornering ABS EVO. These are competent enough that even we were comfortable riding on the slippery, rain-soaked tarmac of Marbella with these aids dialled back quite a bit. The Diavel’s electronic brain handled traction with finesse, with barely perceptible intervention.

To top things off, there’s even Ducati Power Launch EVO, the company’s two-wheel equivalent of launch control, which when activated provides enough explosive acceleration from a standstill to scare the most hardened of bikers silly. The S model that we were riding also came standard with Ducati Quick Shifter, which provided flawless clutch-free up and down shifts for the 6-speed gearbox. And one thing that really does deserve mention here is that for a bike, and engine, of this size, the gearbox felt surprisingly slick shifting.

It’s not just about straight-line performance
At first thought, the continuously snaking road from Marbella to Ronda shouldn’t be the best place to experience a Diavel. I mean, a bike that looks like a proper muscle cruiser would be best enjoyed on arrow-straight roads, right? Wrong! This new Diavel flows from corner to corner in a manner completely unlike what you’d expect from a power cruiser. In fact, the handling is almost reminiscent of a big sports-naked.

For this, the engineers at Ducati have moved the radiator from the side of the motor to the front (where it should be). This has allowed the engine to be shifted back by a whole 60mm, improving the bike’s centre of gravity. The single-sided swingarm had to be shortened to make room for the engine but the overall wheelbase is slightly longer now, at 1600mm. Then there’s a new frame too, which just like on the Monster or Panigale, mounts directly to the front cylinder head, making the engine an integral stressed member of the chassis. In order to compensate for the longer wheelbase, the steering head has been steepened to 27 degrees, with a tighter 120mm trail.

While it’s no Monster, the Diavel tips into corners with a fluidity that’s wholly remarkable given its bulk. Quicker turn-ins means you can be more aggressive while changing directions, and the Diavel is eager to respond to any inputs to the wide handlebars. And there’s a massive 41 degrees of cornering clearance on either side, so we found ourselves carrying crazy leans without grounding the footpeg feelers. That said, once cranked over, you do get a bit of that rear-end wallow common to most bikes with gigantic rear tyres. But the 240-section Pirelli Diablo Rosso III is an absolute game changer. Compared to the last-gen Diavel, this one gives you a huge amount of confidence when leaned over. So even though it rained on our ride back from the lunch stop, we didn’t feel the slightest need to rein in our pace.

Now, this S model that we were riding also came equipped with some top spec suspension - a fully adjustable 48mm Ohlins fork (2mm skinnier than the standard Marzocchi) and an equally adjustable Ohlins rear monoshock. These of course play a vital role in keeping the Diavel rubber side down when throwing it from corner to corner, and we’re told that Ducati engineers have fettled with them enough to make an improvement in the way the bike rides. The monoshock, for example, has now been mounted laterally to afford the rear wheel more travel. But with nary a bump or pothole on our entire ride, we would be hard pressed to confirm the veracity of those claims. What we can verify is just how well the new brakes on this Diavel 1260S work. Sturdy Brembo M50 monoblocks at the front bite down on a pair of dinner plate-sized 320mm rotors, help bring this behemoth down from speed surprisingly quickly, though initial bite does feel a little soft.

Goes like the Devil, looks like one too
There’s no doubt that the Diavel always had an intimidating appearance, and that doesn’t change even with this 1260. The overall shape is still unmistakably Diavel - broad shoulders, the pulled back stance of a muscle car, the gigantic rear tyre mounted to a gorgeous single-sided swingarm - it’s all still there. But the new bike doesn’t share a single panel with the older one. Some of the major mechanical changes like the radiator moving to the front, having more of the engine exposed and the exhaust headers and box getting tucked under the bike, terminating into small twin pipes from side, have given the Diavel a slimmer, more athletic profile. It’s gone from a weightlifter to a heavyweight boxer, with the more angled air ducts and new “lightblade” indicators making for a chiseled appearance. The flatter, sharper headlight design adds to this more aggressive aesthetic as well, which, from the front, along with the S model’s DRL setup looks like the maw of a cobra with its fangs out.

The view from the saddle is great too, with the tank stretching out a mile ahead of you, culminating into a tiny full-colour TFT screen which, while looking like it might belong on a supermoto, serves to accentuate the Diavel’s beefy character. The 3.5 inch display is almost a replica of the larger one from the Panigale, and even offers Bluetooth connectivity to your smartphone for music as well as control of the bike’s various electronic systems like DTC, DWC, DQS, et al.

Aggressive, yet welcoming
And speaking of the saddle, this new Diavel maintains the same rider’s triangle as before, with its high handlebar, low seat (at 780mm) and mid-set footpegs. The only real difference here is that the handlebar ends have been pulled a little closer to the rider to make it that much easier when maneuvering at slow speeds. The seat is deeply scalloped and comfy too. When you’re tackling twisty bits though, a seat that’s closer to the front of the bike and footpegs that are more rear set would’ve really done the trick. But hey, if you want an upright, sporty posture, you’ve got the Monster for that. The Diavel is happiest blasting down the highway at high speeds, although you do feel the need for better wind protection in that case. You could take a pillion along as well on its wide rear seat, and you do have a pillion grab handle that pops out from under the seat to make that easier. But with such madness coursing through the Diavel’s veins, your pillion better have ice water flowing through theirs.

Deadly, dynamic and delightful
Quite simply put, the Diavel isn’t just a muscle cruiser anymore. It still has the appearance of one, sure, and it’s got the firepower as well. But it’s now friendlier to manage and has actually got the handling prowess to rival some of the larger roadsters. It’s not just fun in a straight line… it’s fun… full stop! So now, the Diavel finally lives up to what Ducati calls it - a Mega Monster!