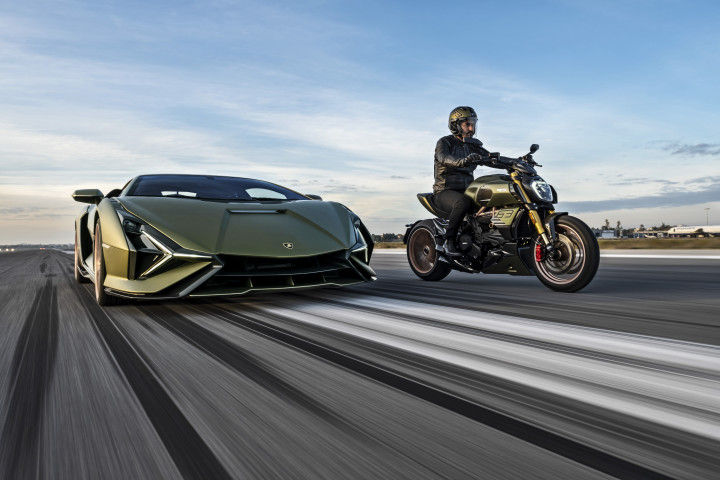 It was no secret that Ducati and Lamborghini were working closely on a special edition Diavel. The two Italian brands had earlier even collaborated in making a one-off Diavel for the Milan Design Show 2019. As evocative and bonkers that Diavel was, it can’t hold a candle to this new devilish power cruiser: the Diavel 1260 Lamborghini.

Both the Centro Stile Ducati and the Centro Stile Lamborghini have worked closely in making this the beast that it is. Work began on a Diavel 1260 S with the aim of honouring the legacy of the Sant’Agata manufacturer. There’s not much change to the overall silhouette of the Diavel 1260. The difference arises in the materials used as well as the choice of colour selected. Majority of the body panels like the front and rear mudguard, the central tank cover, the silencer cover, radiator covers and air intake, are made from carbon fibre.

Then, there are signature Lamborghini elements woven into the Diavel. Take the exhaust tips, for instance, the hexagonal shape is oh-so-Lambo. Those flurry of Y-shaped details that you see on the seat of this Diavel, those too are must-have elements on anything Lamborghini. Ducati used the exact same paints as the ones from the Sian FKP 37 supercar for this bike. The body panels arrive in the “Gea Green” shade with the frame, forged wheels and the tail finished in “Electrum Gold.” It wouldn’t be a Ducati if there was no red element, the Brembo M50 monoblocs here arrive in the Ducati Red shade.

The 1,262cc L-twin Testastretta DVT motor is now EU5-compliant, putting out 163PS and 129Nm, that's 4PS more than the EU4 bike. Aiding the riding experience is Ducati’s safety electronics suite. The cornering ABS, traction control, wheelie control and launch control settings all bear the EVO suffix, which means they are finely tuned to work in conjunction with a six-axis IMU. Cruise control is standard.

One of the distinct features of the Diavel remains its 240mm wide rear tyre wrapped in a specially built 17-inch forged wheel. The single-sided swingarm allows Ducati to flaunt the new rear wheel now shaped just like the wheels of the Sian FKP 37. Even the front wheel has the same design, but the wheel assembly and stuff obstruct the view. No changes in hardware from the Diavel 1260 S here, so you have the fully-adjustable Ohlins suspension and Brembo braking units.

The resulting dry weight of all of the changes is 220kg, which is a whopping saving of 24 kilos over the regular Diavel 1260 S. Ducati will build only 630 units of the Diavel 1260 Lamborghini. The reasoning behind arriving at the 630 number is simple: Lamborghini was founded in 1963 and only 63 units of the Sian FKP 37 were ever made. Each one of these 630 units will receive a special identification number, which will be etched onto an aluminium plate and stamped on to the bike’s frame. Will we ever get to see one of these Diavel Lambos in India? Considering there are a couple of Panigale V4 Rs in the country, even though there are only 500 worldwide, there is a good chance Ducati will want to sell a few units in the country.

For those who might miss out on the Lambo edition, the Diavel 1260 and 1260 S are also EU5-compliant now. This should mean that we will see both of these bikes back at Ducati dealerships soon enough.