Ducati And Lamborghini Concocting A Devil 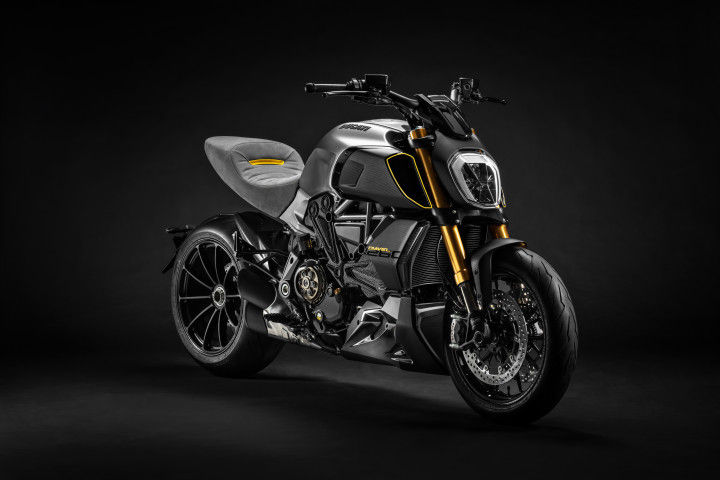 Ducati and Lamborghini have provided us with countless beautiful creations over decades, many of which have been perfect pin-up posters, or mobile wallpapers if you are on the younger side. The two Italian brands have been at the top of the performance game. Now, both of them are pooling resources to build a limited edition version of Ducati’s power cruiser: the Diavel 1260.

This isn’t the first time the two marquees have joined hands. The top designers of the both companies as well as Walter de Silva (former VW designer), Piero Misani (R&D boss at Pirelli) and other top designers had created a one-off custom Diavel 1260 S. The bike was shown off at the Milan Design Week last year.

While there were no changes to the styling of the bike, certain elements of the bike received fancy treatment. The side panels and radiator guards were made out of carbon fibre. The belly pan got this lovely jet black glossy finish. You got a lot of yellow accents on the bike that complemented the golden USD fork well. And even the under-tail panel arrived in a similar yellow shade to the one matching the one you find on the Lamborghini Urus.

Mechanically, we don’t expect Ducati to make many changes to the Diavel 1260 S. It will be powered by the same 1,262cc Testastretta L-twin motor as before. The Euro 5 updates should be arriving on the bike soon enough but we don’t think it will lose out on any performance. It made close to 160PS and 129Nm and was one of the quickest motorcycles we have ever tested. The custom-built Diavel 1260 might have been running a dry clutch but we don’t think that feature will make it on to the production bike.

Suspension duties will continue to be handled by premium Ohlins units which are fully-adjustable while Italian braking specialists Brembo will continue to provide the necessary braking equipment. Not to forget Pirelli’s contribution as the Diavel 1260 Lamborghini will most likely stick with the same grippy Diablo Rosso 3 tyres, of which the rear 240/45-section was specially developed for this bike.

This isn’t the first time Ducati has created special editions of the Diavel either. The older model had two unique editions built: Carbon (which as you might have guessed it had carbon fibre body panels) and Diesel. No, it didn’t run on diesel but much rather had design inputs from premium apparel brand Diesel. Both of these models were built in limited quantities and came bearing a certain premium over the regular bike.

The same is likely to be the case with the Diavel 1260 Lamborghini. We think the standard 1260 will retail for Rs 18 lakh while the S trim will arrive at around Rs 19.50 lakh. Hence, expect the Lambo edition to be slightly upwards of Rs 20 lakh, ex-showroom India.