Billed as India’s first ‘speed biking festival,’ the Festival of Speed was an adrenaline filled evening for one of India’s most popular motorcycles, the Bajaj Pulsar 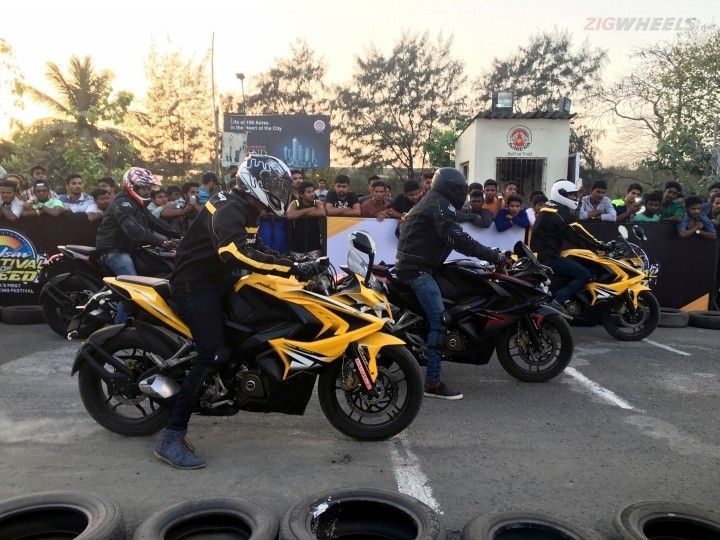 Bajaj Auto conducted the Mumbai chapter of its Pulsar Festival of Speed on Sunday, March 20. Pegged as the first ‘speed biking festival’ in the country, the event saw a huge turnout of Pulsar owners and biking enthusiasts who converged for an evening of assorted motoring events along with music and general revelry.

The idea behind the Festival of Speed is to bring together owners and fans of various Bajaj Pulsar models under a common platform where they can mingle and take part in group sporting events. This is an initiative that has been conducted with great success by international motorcycling brands, especially cruiser and touring motorcycle manufacturers.

The Mumbai festival started at 4PM on a characteristically warm Sunday afternoon. As the coastal sea breeze did its ineffectual part of cooling down the Mumbai air, bikers started riding into the vast parking lot, mostly in groups with pillions. Bajaj Auto has made it a point to enforce safety rules so it was heartening to see every biker wearing at least a helmet, although the city’s mandatory Mumbai rules would have seen to it anyway.

The first event of the evening was also the Festival of Speed’s main draw: a gymkhana-type race in a circuitous area that could’ve barely passed for a go-karting track in size. With the help of discarded tyres, the organisers had sketched out an ‘M’-shaped short track (with the two legs of the letter joined by the main ‘straight’). In the waning light of the sun Pulsar RS200s lined up in groups of three and, as the chequered flag dropped, took off with gravel spraying everywhere for an extremely tight race around the twisty circuit.

As expected from such a track, there were a few inevitable falls and scrapes. When the dust subsided, Sachin Khengle clinched the first position in the Pulsar RS200 category, followed by Mohammad Ayaz Shaikh as first runner up and Akshay Karande as second runner up.

In the “above 200+” category, Sharookh Namazi emerged as the final winner, followed by Adil Shaikh in second place and Ansari Vakil rounding off the podium.

The next event was a stunt show by India’s most famous motorcycle stunt team, the Ghost Ryders. Attesting to the notion that power isn’t the be all and end all of stunting, two members of the team displayed a dizzying array of two-wheeled (and one-wheeled) acrobatics on their weapon of choice, the Pulsar 135 LS. From burnouts to stoppies to half-chair and no-hander wheelies, the duo left the crowd screaming for an encore with their repertoire of Pulsar shenanigans.

After the stunt show, it was time to disperse from the small track and head towards the live music and other un-automotive attractions. But, bikers being bikers, we naturally gravitated to the only attraction here with an automotive bent-the merchandise and accessories section. The stalls were small and modestly populated but there still were some goodies to be found. From crash protectors to riding jackets to biking gloves to bike-care products, bikers were free to peruse items that caught their fancy and buy it outright on the spot if they fancied so.

As the sun went down and the sky turned an inky blue, all festivities turned towards the live music stage where singer composer Lesli Lewis belted out a string of Bollywood and Indipop covers. Presumably buoyed by the adrenalin of the previous sporting events, the crowd melted into the music, tapping feet and fingers with enthusiasm.

After about an hour or so of live music, it was time to call it a day and head home. As I weaved my way home through the weekend traffic of Mumbai, I reflected on the Festival of Speed. While I absolutely adore track racing and long distance rides, it is only understandable that not everyone will have the time or the resources to indulge in such activities. Youngsters and those bang in the middle of metropolises will have to wait just a bit more before they become independent and confident enough to undertake such events on their own.

But, nevertheless, the itch is there for budding bikers, and this is what I hope events like the Festival of Speed will scratch. By bringing bikers and enthusiasts of a brand together and letting them loose – figuratively speaking – on a platform where they can pit their skills against one another in a safe and controlled manner, events like these foster the growing biking fraternity. The live music, the jovial air, and the other non-biking events are all just the icing on the cake.

Held across six cities in India, the next round of the Bajaj Pulsar Festival of Speed will be conducted in Pune on 26th March, 2016. Entry is free and first Pulsar Cup champion stands to win a cash prize of Rs 1 lakh. More details can be had from the Festival of Speed website here.