The final round of Bajaj’s Festival of Speed was held at the Kari Motor Speedway in Coimbatore. This was a culmination of a month-long nationwide challenge that saw the top finishers from six regional rounds make their way to the finals 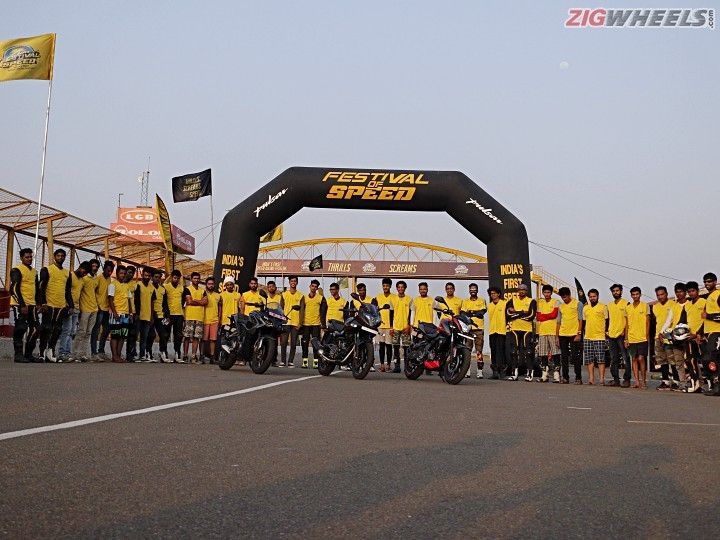 Performance for the masses, that’s what Pulsars are all about. And, that explains why Bajaj chose to go for the road-race format and not a one-make series. “The concept of road racing takes racing to the masses rather than enthusiasts travelling to the racetrack of which there are only three in the country.”, said Praful Sancheti, marketing manager for Bajaj FOS. A safe racing environment for enthusiasts, to connect the enthusiasts and to enthrall those who want to watch, the Festival of Speed aims to make racing accessible and fun. Also, it offers riders a chance to evaluate their skills.

There was a thirst to compete, to evolve into a better rider and grab hold of all opportunities coming your way. It was reminiscent of last year’s RS 200 class winner, Saad Gaibi, who raced on his friend’s bike which he had transported from Pune to Coimbatore in a tempo the night before. A lot of riders even rode down long distances on the very bikes they were about to race in the finals. Thankfully, Bajaj’s service team was on hand to give all the bikes a quick check and also to help with repairs and replacement of damaged parts during the race.

The enthusiasm wasn't limited just to the youngsters, Saad’s parents had travelled from Pune to watch their son race. The parents admitted that their son's passion for racing and no access to proper racetracks had resulted in quite a few accidents and injuries over the years. The tension was palpable on their faces during the races which, after turned into relief and joy when they got the news that their son had won the championship. However, Saad’s father had a realistic approach towards his son's passion for racing. He bemoaned the lack of racetracks in cities other than Chennai, Coimbatore and Delhi and strongly suggested that the Government or wealthy enthusiasts should take it upon themselves to build racetracks around other cities as it would allow youngsters an outlet for their passion and not force them to race on roads. It would also help make motorsport easily accessible and financially viable to enthusiasts.

The day before, the race saw the 36 finalists receive training on track etiquette. With the Pulsar Festival Of Speed regionals round having been held on smaller go-kart circuits or temporary tracks, most of the riders had not ridden on a racetrack and it was imperative to get them accustomed to the track before allowing them to race. Kari racetrack is known for its tight and technical corners that are vexing to riders on both small and large-capacity bikes. While the first edition just had finalists from the Pulsar RS 200 category compete in the final round at the MMRT racetrack in Chennai, this year's edition saw all three categories compete at the Kari racetrack.

The finalists were taken through classroom sessions on the dos and don'ts of track riding and this was followed by practice sessions on the track. On the day of the event, all finalists gathered for more practice laps. This was followed by qualifying laps for the three classes. The training session was described by some of the finalists as an eye opener since riding on the track was quite a different experience from what they were used to on the road. At the start, a lot of them struggled to adapt as they learned the concept of hanging off a bike around corners, moving the body around, grabbing the fuel tank by the knees and managing weight transfer. Many were glad to learn and believed that even if they did not win, they would at least go home better riders. Emmanuel Jebaraj, former national champ, trained the finalists for the races and was won over by the enthusiasm shown by the finalists and the desire to learn.

The races were divided into three classes – The Pulsar 220, NS & AS 200 and the RS 200 class. Prior to qualifying, the bikes were subject to scrutiny by FMSCI officials as no performance modifications were allowed. All bikes were in stock trim with stock tyres. The only changes allowed were the removal of the main stand, rear number plate holder, rear tyre hugger and mirrors. The FMSCI officials were also present during the races to ensure that all safety precautions and racing guidelines were adhered to.

The qualifying laps decided the grid position for the first race. As opposed to the regional round format, the final round saw two races for each class with a point system. Race one consisted of six laps, while race two consisted of eight. The winner of each race was awarded 10 points, second position got 9 points and so on. The rider who scored the most number of points in his class was adjudged winner for the season.

It was the boys from Bangalore and Hyderabad who dominated the races. Shri Harsha who set the fastest lap time during practice said that most of the boys from clubs and practice on go-karting tracks. This approach helped them quite a bit in the regional rounds. While most of the riders met and interacted during this and last year's event, they plan to ride and train together for next year’s season.

Here’s how the racers stacked up in the various categories.

Race one saw Arvind Ganesh of Chennai set the fastest time of 1.25.467 putting in at the start of the grid. From the start, Arvind was significantly ahead of the rest of the riders. The race saw its fair share of incidents with two riders crashing out. Eventually, it was Arvind who claimed the top spot followed by Balaji from Chennai. M Karthik from Hyderabad clinched the third spot. Race two again saw Arvind Ganesh dominate the eight-lap race putting a gap of 37.095 between him and Ithias A who came in second, followed by Balaji. Arvind Ganesh of Chennai comfortably won the second edition of Pulsar Festival of speed in Pulsar 220 class. Balaji from Chennai claimed second overall while Ithias A from Bangalore clinched the third spot.

The NS & AS 200 class was filled with disappointment for Shri Harsha from Hyderabad who had set the fastest pace overall with a lap time of 1.23.934 in qualifying and from the start of race one, was significantly ahead of the competition. He was nearly half a lap ahead of the rest, when engine troubles cropped up, forcing him to retire, dashing all hopes of a clear victory. Nikhil Johnson from Hyderabad won race one, while Karan Vrishya from Bangalore came in second followed by Imran Uddin from Bangalore. Ultimately it was Karan Vrishya from Bangalore who bagged top honours for the second edition of the Pulsar Festival of Speed in the Pulsar NS & AS 200 class. Imran Uddin from Bangalore came in second while Yuvaraj from Chennai claimed third place.

Among the finalists were seasoned riders who were clearly used to the track, but were surprised by amateur riders like Sathya Narayan who had raced in one-make championships and Saad Gaibi who was on his second outing on a racetrack. The first race of RS 200 class saw a heated battle between Hyderabad rider Sathya Narayan Raju and Pune rider Saad Gaibi. The battle between the two finally culminated in Sathya winning the race by just 0.154 seconds ahead of Saad. Zaibulla who started the race in fifth position finished in third place. The RS 200 class saw Sathya and Saad lock horns in a tough battle for first place. However, Sathya cut off Saad quite a few times, a dangerous manoeuvre. This led to Sathya's disqualification by the FMSCI chief steward for dangerous riding and that effectively put Saad on a clear path to victory.

Racers, at the ready!

Bajaj is already gearing up to make the third edition of the Pulsar Festival of Speed a bigger and better affair. Plans are on to rope in more cities to make participation affordable for riders from different states and showcase their talent. There is also the possibility that Bajaj might join hands with a tyre manufacturer to supply tyres for the bikes for the event. This will ensure uniformity and fresh tyres will mean a better and safer riding environment. While the concept of road racing might be at a nascent stage, it is heartening to see a manufacturer take up the mantle and allow young talent an opportunity to recognise their skill level and limits in a safer environment.