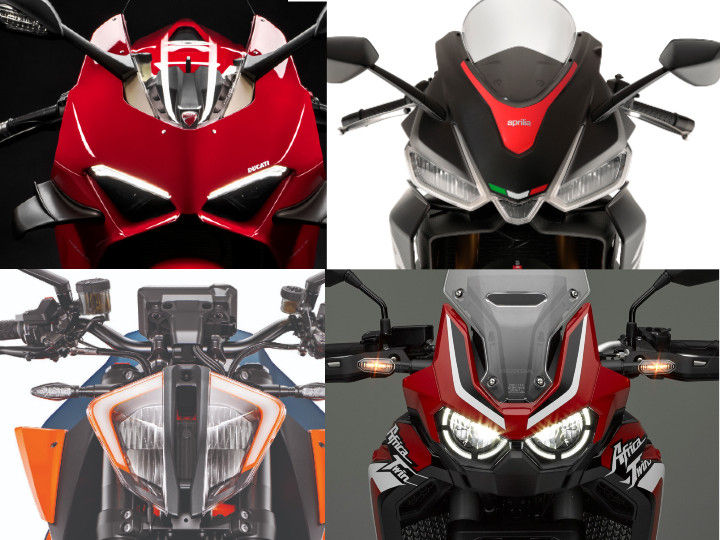 As we all engage in celebrations, this festival of lights has got us thinking of some of the most exciting motorcycle headlights that we've seen. We had a hard time narrowing it down to just five but here are our picks:

Ducati Panigale V4
Ducati ushered in a new era of performance motorcycling when it bid adieu to its traditional L-twin engine architecture for a visceral V4 experience. As phenomenal as the Panigale V4 has been to ride, it is quite an enchanting looker too and it all begins with the dual triangulated headlights. The LED brow DRLs complement the look, adding a menacing touch.

Honda CRF1100L Africa Twin
The new Africa Twin really has made a big step up in styling over its predecessor, which was quite a sombre looking motorcycle. What really brings out its wild side is the Dakar-winning CRF450 Rally-inspired front section complete with semi-circular LED DRLs surrounding the LED headlights. They look purposeful and are distinctly different from any of its rivals.

KTM 1290 Super Duke R
They don’t call it the beast for nothing. KTM’s biggest naked is quite the deadly motorcycle with sharp styling meant to evoke an aggressive design. The triple-stacked headlamp layout has become so iconic that you now find it on nearly all of KTM’s naked and adventure motorcycles. But this KISKA-designed fanged headlight first made its mark on the beast: the 1290 Super Duke R. Over time, the bike has got even more animalistic. The headlight though remains as sinisterly beautiful as ever and it would take something even more radical for KISKA for the next generation.

Aprilia RS 660
Even though the Aprilia RSV4 is still regarded as one of the best large-capacity sportbikes out there, the design has finally started to show its age. With the arrival of the new RS 660 though, Aprilia itself is entering a new segment of motorcycles, showcasing what the future holds for the RS family of sportbikes from Noale. It has got long LED DRLs with sleek LED headlights neatly positioned to give it a new insect-like face. This aero-efficient design doesn’t just cut drag but also looks quite cool!

Bajaj Pulsar 220F
Completing the list is a motorcycle design that has stood the test of time. Even though it's a decade old, it still is truly something special in 2020. Yes, the Bajaj Pulsar 220F’s iconic dual-projector vertically stacked headlight has been one of the most aspirational motorcycles to have since 2007. A lot has changed since then, the bike itself going down the carb route and back to being a fuel-injected one but the half-faired design remains attractive and awe-inspiring.