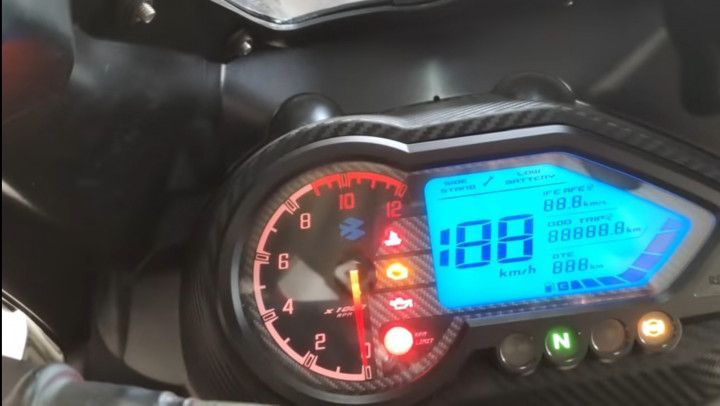 Bajaj Auto had recently hiked the prices of almost its entire range for 2021. The Pulsar 220F was one such model. Now, to justify the hike, the company has updated the 220F’s instrument cluster.

The Pulsar 220F is one of the best selling motorcycles ever. One can argue that a much-needed overhaul was a long time coming, but Bajaj is looking into the more minute aspects now. The 2021 Pulsar 220F still uses a semi-digital instrument cluster that resembles the previous one. But the differences become clear once you switch the motorcycle on.

The fuel gauge is now found at the bottom right corner instead of the vertical one at the left. The odometer is present at the right too, making it easier to read. Apart from the layout changes, there’s more information on offer -- the dash now shows fuel-consumption and distance-to-empty. These two features are a welcome addition, now that the bike gets fuel-injection in its BS6 iteration. It should help the rider get a clearer idea about the bike's mileage.

However, we’d have liked if Bajaj had provided a gear-position indicator too. Maybe next time, Bajaj? Finally, the speedometer cable is now connected to the rear wheel instead of the front wheel.

While these changes are useful, it isn’t half as tech-heavy as its price rival, the TVS Apache RTR 200 4V, which has smartphone compatibility, not to mention the recent addition of multiple rider modes.

What remains of the Pulsar 220F has been untouched. The bike continues to use a 220cc single-cylinder motor that churns 20.4PS of power and 18.55 Nm of torque.